(Austin Weber introduces our premiere of a new video and song from a forthcoming debut album by The Ritual Aura.)

We’ve covered The Ritual Aura before at NCS (here), and this Australian death squad are in impeccable form once again on the song/lyric video that we are premiering today called “Erased In The Purge”. In the time since we last wrote about them, they’ve signed to Lacerated Enemy Records and are nearing the release of their debut album, Laniakea, on August 27th.

If you think you know what you are in store for, “Erased In The Purge” has a few tricks up its sleeve beyond its primary mission of whipping you into a psychotic frothing frenzy. It’s so hellbent on destruction that it’s possible it was conceived specifically to be a sonic call to arms. If any nation around the globe with warmongering tendencies were smart, they’d make this their national fucking anthem. It’s that lethal. 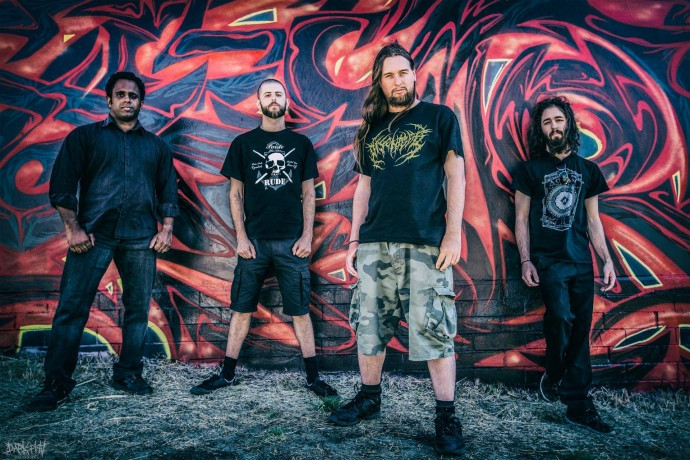 But to return to my earlier point regarding the diverse nature of “Erased In The Purge”: The song’s lightning-fast nature somehow finds a way to diverge into an epic peak in its mid-section, replete with powerful clean singing courtesy of Drew from Ur Draugr, a fellow Australian act that Islander has covered here before at NCS.

The track gets an additional boost of aggression from a guest solo courtesy of Lucas Mann (Rings of Saturn) about a minute in, and from there a number of Cynic-shaded, robotic-effect-laced vocals worm their way into this complex writhing mass as well.

While I’m not a huge fan of breakdowns, the addition of a massive and well-placed breakdown tucked into “Erased In The Purge” somehow fits perfectly alongside the track’s frenzied, racing pace. If your brain doesn’t feel as if it’s been spun in a blender by the end of hearing “Erased In The Purge”, well maybe you need to try a different drug besides metal music.

Laniakea will be released on August 27 in a limited-edition CD as well as digitally, and it can be pre-ordered here:

3 Responses to “AN NCS PREMIERE: THE RITUAL AURA — “ERASED IN THE PURGE””