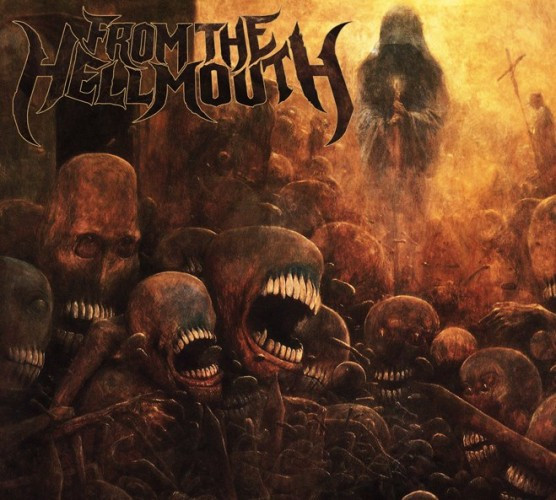 Back in May of this year we premiered a full stream of the first release by a new label named Redefining Darkness Records — an excellent EP by Vintage Warlords — and today we’re bringing you a full stream of the label’s second release. This one is a self-titled monster by the Cleveland band From the Hellmouth, which is set for release on August 28.

You have to hand it to this group for coming up with a band name that so accurately represents their sound. They also made wise moves in both illustrating the album with the masterful art of Zdzisław Beksiński and also having Alan Cassidy of The Black Dahlia Murder record the drums on this debut EP. Cassidy’s performance is absolutely decimating — a machine-precise, turbocharged, eye-popping percussive demolition project.

But the songs really demanded someone of Cassidy’s skill to complement all of the other head-spinning, utterly savage performances on the EP. The songs generally fly hard and fast, one blast after another of pugilistic riffs mixed with grisly tremolo-picked swarms, segmented by booming grooves that will both get your head moving (and loosen it from your spine).

On top of all the butchering instrumental skill, the band have added beautifully timed layers of keyboard chords and ambience, lending further texture to the touches of melody that make the songs memorable as well as barbaric. And let’s not forget the vocals — these growls and roars are bestial in the best way, and inflamed with ravenous passion, rising and falling as if the vocalist were in the full throes of a blood lust when recording. You can also make out the lyrics well enough to be seduced into roaring right along with him.

While the core of the songs lies in a dedication to bone-splintering, flesh-flaying death metal, they are not all the same by a long shot. “Eat the Blade”, for example, ends with a slow, melancholy melody that provides a striking contrast to the way the song begins, and “Carved From the Flesh of God” is the mid-paced bearer of massive grooves married to dismal atmospherics.

All of which is to say that From the Hellmouth display a lot of astute song-writing ability on this EP along with a knack for knowing how to unleash hellfire.

This really is a strikingly good, powerfully produced debut, from a band I have a feeling we will all be hearing a lot more about in the future, a band capable of both drawing influence from death metal pioneers and adding modern touches that keep the sound fresh as well as fiercesome. And by the way, From the Hellmouth is astonishingly just one man — who fittingly calls himself The Impaler — though we understand he is looking to add other members now.

You can pre-order the EP on CD or digitally at this location:

2 Responses to “AN NCS PREMIERE: “FROM THE HELLMOUTH””