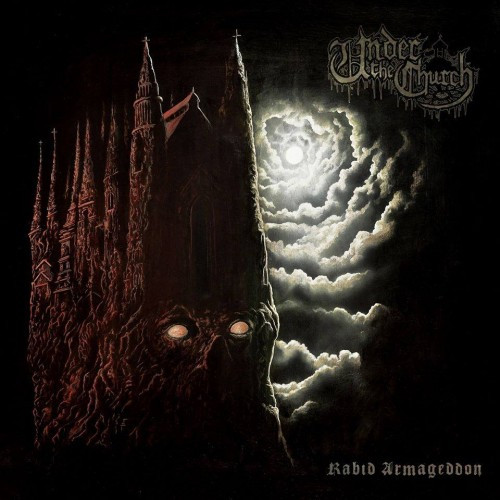 It’s so nice to find a band still early in their discography who consistently kill it with each new release, especially when their weapon of choice is raw, unrepentant, bestial death metal of the old school. The band I happen to have in mind at the moment is Under the Church.

Perhaps the consistent quality of what they’re doing is to be expected, because although Under the Church is a new name, the band was started by two former members of Sweden’s Nirvana 2002 — drummer Erik Qvick and bassist Lars Henriksson, and they are joined by Australian vocalist Mik Annetts.

I’ve already praised their debut demo from 2013 (here), as well as a single (here) from their self-titled 2014 EP (which included the demo tracks plus four new songs). And now the band have completed work on their debut album, Rabid Armageddon, which will be released in October by Pulverised Records. As a teaser for that release, we’re featuring a song from the album named “Walpurgis Night“.

The smoking, grinding, corrosive riffs in the song start carving and cutting right from the start, soon joined by the napalm spew of a guitar solo and Annett’s filthy growls. The song’s rhythm alternately pounds and jumps with a throwback punk-influenced beat and jolts like a jackhammer, and it lights up with another blast of acetylene shred before reaching its conclusion. So fine….

Rabid Armageddon will be released in North America and Europe by Pulverised on CD and digitally on October 30. A subsequent LP version will be released in black vinyl and a more limited set in clear vinyl. The album’s awesome cover art was created by Swedish illustrator Mattias Frisk (Ghost, Vanhelgd, Vampire, etc.). And here’s the track list:

One other song from the new album — entitled “Sodomy and Blasphemy” — is available for listening on Bandcamp, so I’m including that one below as well. Guess what? It kills, too.

7 Responses to “AN NCS PREMIERE: UNDER THE CHURCH — “WALPURGIS NIGHT””