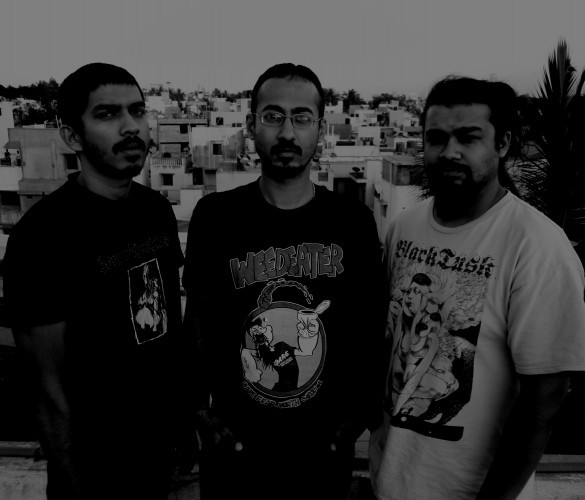 (Comrade Aleks has interviewed dozens of bands from all over the world, and we have published many of them. This is the first one in which the subject told us to fuck off.)

Shepherd is a band of cocky dudes from Bangalore, India. This stoner doom outfit also has some sludgy influences and approach, and you can easily find it in their debut full-length album Stereolithic Riffalocalypse, which was released by Shepherd themselves in March 2015. Does this record have any surprises for listeners? What’s new in the Indian underground? Let’s ask Deepak Raghu (drums, vocals).

Hi Deepak! Well, this question doesn’t tend to be most original one, so let’s just get it out of the way – why did you name the band Shepherd?

No reason whatsoever. Just wanted something simple and catchy, like Slayer.

There’s Bevar Sea, Djinn and Miskatonic, Dormant Inferno, and Dying Embrace in the Indian doom scene, but Shepherd sounds different even though you play drums in two of the afore-mentioned bands. What are your influences?

Hard to pin-point what our influences are currently, but at the time we started the band it was all about tuning low and playing slow. But like anything, you start one way and end up somewhere else. That makes us stand out from other such bands in the genre because we’re not militant about it.

There’s a whole bunch of new bands popping up in Bangalore who have caught on with the whole stoner/doom/sludge scene. Which is good in a way, but most of them suck because all they’re interested in is imitation and following trends. That’s not what we’re about.

Does the increase in the local scene mean that you have started to play more gigs there? Is it possible for you to play outside Bangalore or Karnataka at all? And what’s the situation with the scene in other states (the central ones, for example)?

There are definitely more gigs happening around town than there were a few years back, but the people who organize and program the shows are not open to taking risks. Top priority is to not lose money doing it, so they end up getting the same bands over and over and over. It’s understandable and we don’t go out of our way to suck up to people for gigs or favors. We don’t do free gigs for “exposure” or “publicity”. Exposure doesn’t pay for rehearsal space, gear, studio time, merchandise, etc.

We have played a couple of gigs outside of Bangalore. We’ve played in Bombay and Chennai, and the response has been fairly decent. We usually end up being the odd band in every line-up. Too heavy for indie, too mainstream for the extreme metal dicks, not enough cargo pants and breakdowns to play with the metalcore kids. If you ask me, we should be in the mainstream and fucking headlining festivals. 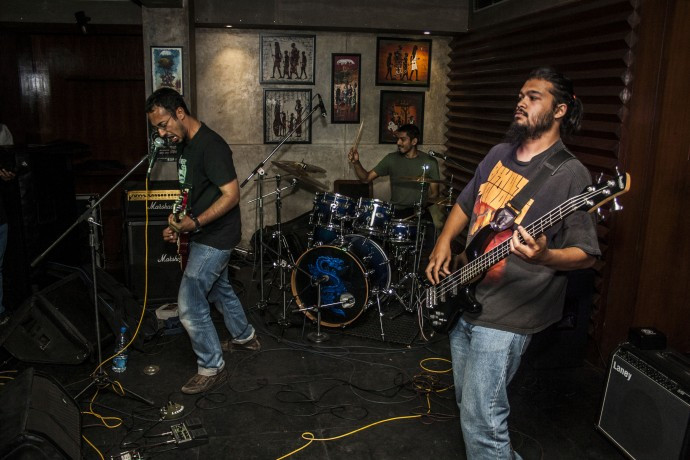 Do you feel that you gave something new to the doom genre if recording your first full-length album Stereolithic Riffalocalypse?

In hindsight the album does stand out from the usual generic shit. We’re not about the gear we use, how many stacks of amps we have, or how much weed we smoke. It’s about songcraft, and it just happens that sometimes all you need is one really good riff.

Do you mean that Shepherd somehow is an innovative band in the doom scene? What are your arguments? Bring it on!

We think we’re doing things that are unique, but ultimately it’s for the listener to decide. I’m not gonna sit here and try to justify what we do. Listen to the music and decide for yourself. Have an opinion of your own for once.

What were your requirements for your sound and lyrics when you wrote these songs?

Lyrics aren’t done until the very last moment, true to rock ‘n’ roll tradition. All three of us write them, so it differs from song to song and person to person. The words take on different meanings every time we perform them.

How long was your road to this record? How did you produce it and promote it?

It took us two years to finish the album. But that was mostly because we had a singer who was a colossal asshole and we had to fire him while we were in the studio tracking. So we had to regroup and figure new vocal parts, lyrics, etc. But the bottom line was to make a good fucking record that could stand the test of time. Which I hope we did.

Who’s your singer now? Do you have a stabilized line-up now?

All three of us sing in the band. Whoever is singing usually writes the lyrics. This is the most stable line-up we’ve had since we started in 2011.

What is your most important personal achievement on Stereolithic Riffapocalypse?

Hmm, not sure about personal achievements, but we really learned a lot about recording, promotion, and most importantly who our real friends are. We’re more together as a unit than we’ve ever been as a band. It helps when the guys in your band are some of your oldest friends too. 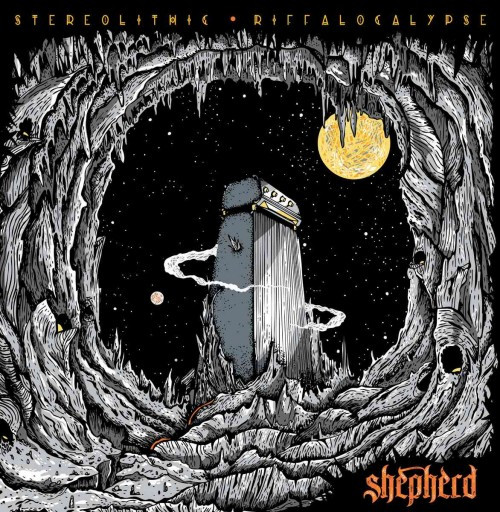 I ask this question of all Indian bands: Why don’t you have any local features in your music or lyrics? How much of Bangalore is in Shepherd?

First of all, none of us in the band are actually from Bangalore. We don’t speak the local language. As for how much Bangalore is in Shepherd — it’s all in there. There’s no escaping the surroundings you’re living in.

We don’t really deal much with fantasy, witches, wizards, and all that. Although there is some of it in a couple of songs. A lot of it is about people we know in our lives, things people do to each other, say to each other, inter-personal relationships, introspection, etc.

Any examples of how the surroundings influenced particular songs?

Depends on what you mean by “surroundings”. If you’re in Bangalore and you’re surrounded by idiots, then is that writing about your surroundings? We haven’t written anything that’s political or aimed at bringing light to an issue. Although there’s a LOT to write about in that respect. Maybe the next album, who knows?

From where did you come to Bangalore, and don’t you want to make the first step and write a song with lyrics in Hindi or Abugida?

Bangalore is a metropolitan city with millions of people that aren’t native to the city. We don’t care so much about the lyrics as much as we do about songwriting. Take a band like Magma. For me it’s more about losing yourself in the music. If you read the lyrics, that’s great. If you get something out of it or find something that you can relate to, that’s even better. I really don’t think language is that big of deal. We want to move people with sound and volume! And what the fuck is Abugida?

Here are two standard questions I ask each band. First one, tell us a story about one song from your album.

Tell you a story? I’m not your fucking grandma, bro.

We have a song called “Black Cock of Armageddon”, which I’ve noticed reads like a very cynical, spiteful song about someone you don’t like, but I wrote it with the intention of it being a reminder to myself to get better at my skills and trying to block out the rest of the world.

And second one – what was your favorite book in school?

No fucking idea. Early on, maybe some Enid Blyton stuff like Famous Five.

Okay, what are your plans for Shepherd this year?

We’re working on our second album at the moment. Plus waiting on the vinyl version of Stereolithic Riffalocalypse to come out on Helmet Lady Records. They recently remastered and re-issued our demo from 2012, Demonstration 2, on limited edition color wax earlier this month.

Ok, thanks for the answers and good luck. Do you have some final words for our readers?

Thanks for reading! No Clean Singing? HAHA. FUCK OFF! Listen to Ronnie James Dio.

3 Responses to “AN NCS INTERVIEW: SHEPHERD”