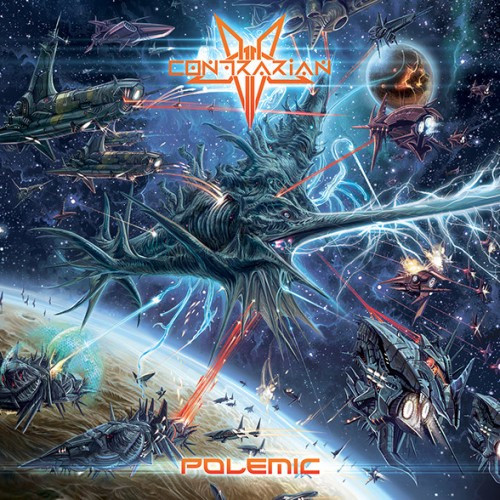 Today we bring you the premiere of the title track to Polemic, the debut album by New York’s Contrarian, which is due for release on November 20 by Willowtip Records.

In a musical landscape overflowing with technical death metal bands, and a similarly large number of extreme metal bands displaying the “progressive” label based on little more than occasional ambient interludes in the midst of all the pummeling, it takes something special to stand out. Contrarian stand out.

Much as their name signifies, Contrarian’s approach to songwriting is unusual, and unusually good. To be sure, “Polemic” displays the kind of intricate, high-speed technical skill that opens eyes wide.

When the song calls for it, guitarists Jim Tasikas (Delirium Endeavor) and Brian Mason (Sulaco, BML) and bassist Ed Paulsen (Delirium Endeavor) can fly like the wind (or perhaps more like bats, given the sharp changes of course and aerial acrobatics in their performances). And the album also features drumming by none other than George Kollias of Nile.

But “Polemic” is so much more than a display of technical fireworks. It’s a union of the mystical and the marauding. Somehow, this song that’s instrumentally complex and loaded with rapid tempo changes is also hauntingly atmospheric, with melancholy melodic motifs that have real staying power.

It’s also definitely a death metal song. In addition to all the other talents on display, the vocals were provided by Cody McConnell of Goemagot, and his slow, deep growls are massive, while the song also includes an assortment of grim, heavyweight riffs and thundering drums.

But what really makes the song so memorable is the band’s success in building a bleak atmosphere at the same time as they’re flashing their technical chops, and in infiltrating the dynamic music with somber, high guitar melodies that prove to be quite memorable. On that score, Leon Macey from the UK’s Mithras (who also mixed and mastered the album) turns in some guitar solos that are simply beautiful.

Polemic (the album) includes the three songs on the band’s 2014 debut EP Predestined (which our man Austin Weber praised in his review last fall), as well as five new songs — and the eye-catching cover art is by the very talented Marco Hasmann.

Enjoy “Polemic” below, and for more info about the album and how to obtain it, follow these links: