This Gift Is A Curse leave little doubt where their allegiances lie, given that their new album (and their first on Season of Mist) bears the title All Hail the Swinelord and is described by the band as “a metaphysical and ritual guideline for the crossing of the final threshold, into the shadows, to touch His black crown”. What we bring you today is the album’s penultimate track, a violent convulsion of sound named “We Use Your Dead As Vessels”.

But for a few howled words, there is no preparation for this conflagration, no warning at the start, no chance to take a breath before the onslaught begins. There is simply an immediate explosion of ferocity that then continues to tear through the song like a blast front, with no pity and no reprieve. It’s a torrent of frenzied percussion and dismal, threshing riffs, broken only by the shriek of feedback, and saturated with a sense of utter hopelessness. Everything is falling apart, and nothing can be done to stop it. 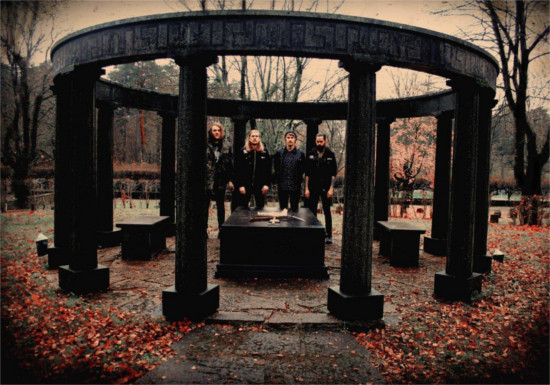 Through the black maelstrom of dissonance and distortion, the band’s vocalist shrieks and screams like a man being burned alive — a man venting a lifetime of rage and pain as  the skin bubbles and melts from his bones. It’s a harrowing performance that holds nothing back.

And to add even more to the song’s suffocating atmosphere of degradation and doom, there are moments of titanic pounding in the low end, as well as bleak, writhing riffs and an otherworldly melody that rises up in the song’s back half like a wraith. The song becomes frighteningly eerie as well as implacably savage, and apart from the sheer cathartic release that the music offers, it exerts a strange attraction. It can get stuck in your head — like a spike.

So now you have been warned. Prepare to be engulfed by this storm.

All Hail the Swine Lord will be released on October 16. This is the track list:

You can pre-order the album on vinyl and CD from Season of Mist at this location, as well as on Bandcamp via the link below. To check out one more track from the album, head over to CVLT Nation.

5 Responses to “AN NCS PREMIERE: THIS GIFT IS A CURSE — “WE USE YOUR DEAD AS VESSELS””