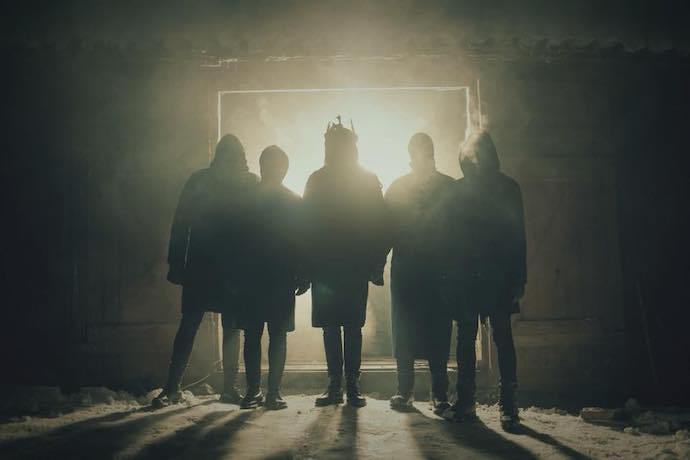 (In this month’s edition of THE SYNN REPORT, Andy Synn focuses on the albums released to date by the Swedish band This Gift Is A Curse, including a review of their most recent album A Throne of Ash, released by Season of Mist on June 14th.)

Recommended for fans of: Dragged Into Sunlight, Celeste, The Secret

The type of Black Metal meets Sludge meets Hardcore hybrid championed by Swedish spitfires This Gift Is A Curse has always appealed to me on a deep, dark level. I can’t necessarily tell you exactly why, but it’s true all the same.

There’s just something about the sheer, bloodthirsty intensity of the music, the absolute refusal to pull any punches or offer any quarter, that makes it impossible to resist.

It’s an ugly, nasty, nihilistic sound, make no mistake about it, but it’s also thrillingly visceral and alive. And the three albums produced by This Gift Is A Curse (the most recent of which was only released a couple of weeks back) are three of the very best examples of the style in all its grim and gruesome glory. END_OF_DOCUMENT_TOKEN_TO_BE_REPLACED

On their last album, All Hail the Swinelord (2015), This Gift Is A Curse made music that ruthlessly takes you apart and sends what’s left of your mind into a very dark place. It was stupefyingly heavy, implacably savage, and frighteningly eerie. We premiered one song from the album and a video for another song, but I failed to review the whole thing. I’ll have a second chance to do right by this Stockholm band, because they now have another album on the horizon. END_OF_DOCUMENT_TOKEN_TO_BE_REPLACED

Sweden’s This Gift Is A Curse gave us (with help from Season of Mist) one of the last year’s most stupefyingly heavy, implacably savage, and frighteningly eerie albums. On All Hail the Swinelord, they made music that will take you apart and send what’s left of your mind into a very dark place. And today we’re helping bring you the premiere of a video for one of the album’s terrifying tracks, “XI: For I Am the Fire“.

The video was written and directed by Ivan K. Maras (Deathless Pictures). Filmed in black and white, it makes the natural woodland setting seem ominous and threatening, and the barren trees and vacant fields bear cold witness to a ritual that visually captures the atmosphere of unavoidable catastrophe created by the music. END_OF_DOCUMENT_TOKEN_TO_BE_REPLACED

I’ve written before about individual songs on the new self-titled debut album by the French band Maïeutiste (and we premiered one of them), but now the album has been released (by Les Acteurs de l’Ombre Productions) and all the songs are available for streaming and acquisition on Bandcamp. END_OF_DOCUMENT_TOKEN_TO_BE_REPLACED

This Gift Is A Curse leave little doubt where their allegiances lie, given that their new album (and their first on Season of Mist) bears the title All Hail the Swinelord and is described by the band as “a metaphysical and ritual guideline for the crossing of the final threshold, into the shadows, to touch His black crown”. What we bring you today is the album’s penultimate track, a violent convulsion of sound named “We Use Your Dead As Vessels”.

But for a few howled words, there is no preparation for this conflagration, no warning at the start, no chance to take a breath before the onslaught begins. There is simply an immediate explosion of ferocity that then continues to tear through the song like a blast front, with no pity and no reprieve. It’s a torrent of frenzied percussion and dismal, threshing riffs, broken only by the shriek of feedback, and saturated with a sense of utter hopelessness. Everything is falling apart, and nothing can be done to stop it. END_OF_DOCUMENT_TOKEN_TO_BE_REPLACED