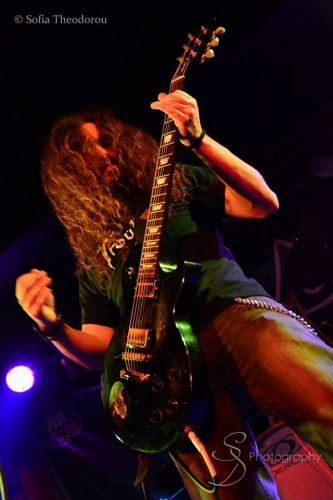 Born ten years ago, Aeon Aphelion has had a lot of line-up changes and only one full-length album, Visions of Burning Ages (2013), and of course I did this interview with the band’s guitarist and vocalist Alex Koutsis because I like this record.

Aeon Aphelion started as death doom band, and though they play now in a more traditional way, you can feel that old school vibe in their songs still. They have a powerful approach, good riffs, proper angry vocal lines, and a bunch of catchy melodies on the album. Trust my words or check Visions of Burning Ages and trust your ears.

Hail Alex! How are you there? How hot is it in Piraeus? And the most important thing — what does the band’s name mean, for Zeus’ sake?!

Hi there Aleksey, thank you for the interview man! Well, it’s the middle of September and it’s still pretty hot… The thing is, it doesn’t look like it’s getting any cooler any time soon either.

The band’s name is something we get asked a lot about, and to put it as simply as possible it means an eternity the furthest away from the sun, like being put away in the darkest and coldest place there is. Very much unlike Athens right now!

The band was founded in 2005, and ten years have passed! How did you start it? Who were with you in first line-up?

That’s right, the band was first started back in 2005 by George (guitar) and our previous singer, Fanis. The first few years there were many lineup changes while the band was trying to find its footing. Things started looking more stable and taking their current form in 2007, initially with the addition of Johnny on bass, who is also the one who came up with the name for the band, and a year later with John V. who took up the position behind the drums. I was actually the last one to join in, first only on guitar and since 2010 on vocals as well. 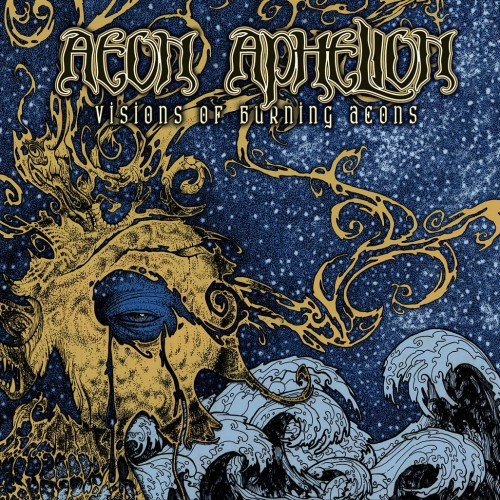 Aeon Aphelion’s first and only album Visions of Burning Aeons has cool art-work. Who is its author and how did you work with him?

We were actually really lucky on this one. First, to have a truly talented guy like Fotis Mith working on the cover and coming up with such an amazing artwork, and also because he is George’s brother we didn’t have to look far to find someone with such an original style. We are actually looking forward to seeing this also on vinyl at some point. That would do it proper justice.

Aeon Aphelion started as death doom band, and Visions of Burning Aeons sounds in a more traditional doom way, yet death doom is still the approach. How would you describe your own vision of the band?

Well, it’s true that up until our very first release, the 2010 self-titled EP, the band was drawing its main influences from the doom-death school of the early ’90s. Then, when the change in the vocalist position happened, I suppose it felt more natural to the rest of us to go with a more traditional approach to doom metal. Maybe there’s still some doom-death parts left, especially in some guitar work, but we are trying to incorporate elements from the whole spectrum of doom metal and heavy music in general. If there is a focal point here, that would be to be heavy and slow without being afraid to pick up the pace once in a while if needed.

What’s the band’s ideology? Is it connected with some philosophy or something? You know the Greek school was most influential for centuries, and I do wonder if it somehow is reflected in your songs. Like in the Septicflesh albums.

Ideologically if there is something that we all have in common in the band, that’s our repulsion against religion and any form of spiritual or physical oppression. That can reflect sometimes in our songs, but lyrically the spectrum is so wide that it can also include fantastical themes based on Lovecraftian literature to inner personal thoughts. I can’t say though that we have any references to ancient Greek philosophy.

Alex, you went pretty slowly to your first record. What kind of obstacles did you meet on your way?

The main problem was not having a stable lineup in the early years. This kept the band away from the studio and the stage for quite some time. As soon as the four of us got together and it was apparent that this lineup was going to work, we started working on forging our own sound and character.

We wanted to be really tight before we entered the studio to record our first full-length, so we did as many gigs as possible and worked a lot on the new songs. The album was actually ready since 2012 but we had to wait for a whole year before we released it, mainly to see if we could get a deal with a label that we felt satisfied with. In the end we decided to release it ourselves, which is always time- and money-consuming, but a most rewarding experience nonetheless.

How do you distribute CDs? And what feedback from listeners did you get?

The easiest way someone can get our CD is through our online store (http://aeonaphelion.bigcartel.com/) or our Bandcamp page (https://aeonaphelion.bandcamp.com/). On Bandcamp you also have the chance to listen to it before you buy it, or you can just download it for free. Of course it’s also available in record stores in Greece and on some online distributors like Pure Steel Records and Emanes Metal Records.

The feedback from fans and reviewers has been particularly positive and encouraging. It was a really nice surprise to see Visions of Burning Aeons as album of the month on Doom-metal.com and for the Greek Metal Hammer magazine. I mean the sheer amount of quality doom releases the last few years just makes it even more rewarding. 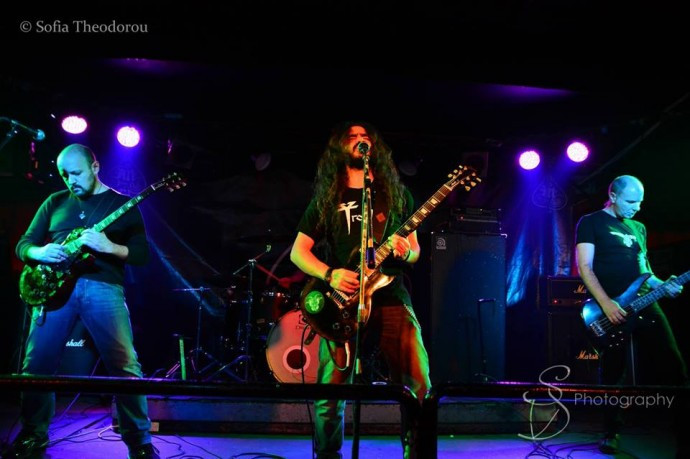 Please tell the story of one song from Visions of Burning Aeons. For example “Ophitic Doctrine”, it’s my favorite song indeed.

Actually you picked one of two songs that the lyrics were written by our former singer. Really poetic and dreamy lyrics, approaching the ancient sect of Ophites and the sequence of birth / life / death / rebirth in a wider sense.

Hah, okay, then what’s your favorite song on the album? And how did you participate in it’s composition?

Since you make me choose, I’d have to go with the one that our drummer hates playing the most! Hahaha! It is the slowest on the album and it’s called “Whitewood”. I’ve written the music and the lyrics and it was based on a ’60s horror movie called “Horror Hotel”. Funny thing is that quite some time after we recorded that song, I found out that the tagline on one of the posters for the movie was “ring for doom service”…hahaha, rather appropriate!

Aeon Aphelion took part in the Hard Rock Revolution Vol. I compilation. What’s this project about?

Well, what I gathered from our collaboration is that these guys just worship the riff and they try to bring underground bands forward to more people by looking for bands on Bandcamp and putting together those non-profit compilations.

Truth is, I wasn’t aware of that project until they contacted us asking to contribute a song for the first edition, but now that I’ve seen their work I feel that what they do is in the true spirit of the underground, so we appreciate it a lot that we were invited to take part in their very first effort.

I’ve seen today a bill for another movie about superheroes, and I remember that there were cartoons about Greek legendary heroes in the USSR. That was cool… Who was your hero in childhood?

Haha, interesting question! There were so many heroes in ancient Greek mythology that it makes it hard to pick one, but I think as a kid one of my favorite stories was that of Theseus with the slaying of the Minotaur and all that… cool stuff!

But since you mentioned cartoons and the USSR, I also seem to remember a Soviet cartoon on Greek TV ages ago, about a wolf and a rabbit… Can’t remember what it was called but it was well funny and strange.

It’s name “Nu, pogodi!”, mate : ) Okay, and here we have a most immediate question: When do you plan to release the next album?

It’s hard to say… We spent quite some time after the release of the first album trying to promote it and doing gigs, so we ended up starting working for the new album somewhat late. But we are working on new songs at the moment and enjoying the process, and in all honesty we are not in a hurry. Whenever we feel ready and confident with the new material we’ll start recording. I would like to see us enter the studio some time next year but nothing is certain yet.

Alex, you’re from the Attic region. Do your roots influence you?

For us the Attica region is the place we grew up, an urban cauldron of people and cultures from all over Greece that has no particular character. Maybe it used to, but not anymore, so I don’t think it has any influence on our music. In other parts of Greece it’s probably easier to define and incorporate local elements in your own music, which is always risky but also very interesting if you do it well. 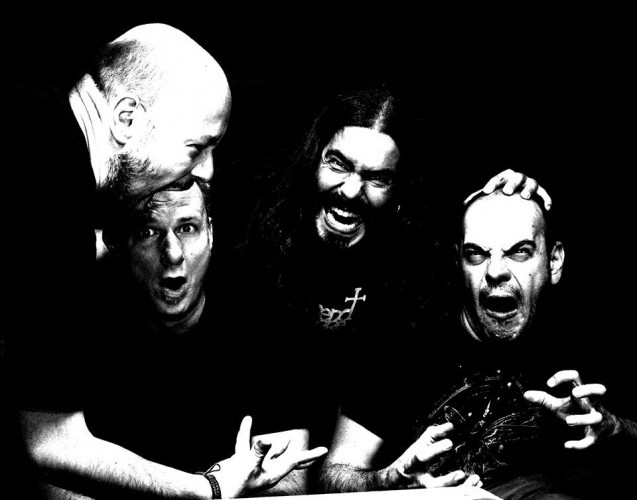 Greece has suffered from financial crises for a long time, how do you feel it?

In everyday life it affects everyone differently, some more than the others. People struggling with their jobs, not getting paid, or not having a job at all. All that, of course, has its impact on the underground music scene as well. It’s getting harder and harder for bands to pay for rehearsals or recordings, travel for gigs away from home, or buy equipment.

Every now and then you hear about studios or venues that had to shut down, and of course there’s people who have to leave their bands in order to go find a job abroad. On the other hand, the whole situation has brought out some solidarity between people and has brought the scene closer together. Or at least that’s how I’d like to look at it…

It was my last question, so I’d like to thank you for this interview and wish you and Aeon Aphelion good luck in these difficult times.

Thank you for giving us the chance to present our band to your readers! Support your local scene and support the underground! Doom You All!