(Grant Skelton provides both an audio stream of his recent interview with Witch Mountain vocalist Kayla Dixon and a review of their show in Memphis on October 7.)

Witch Mountain are currently on the Blackest Of The Black Tour with Veil Of Maya, Prong, Superjoint, and Danzig. Prior to the band’s set at Minglewood Hall in Memphis on October 7, I had an opportunity to sit down with the band’s new vocalist, Kayla Dixon. We discussed vocal training, the band’s cover of Black Sabbath’s “Sleeping Village”, and progress on the band’s next album. Stream the interview here on Soundcloud, courtesy of Local X Radio (localxradio.com): 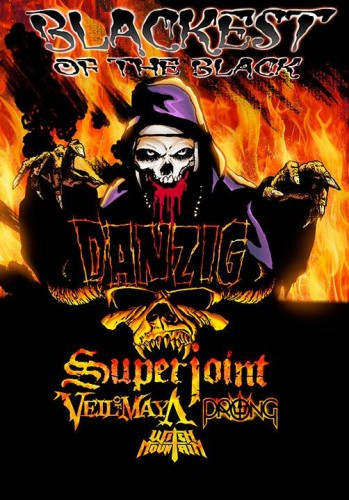 The band’s setlist that night was as follows:

I’m still kicking myself for missing Witch Mountain when they were in Memphis back in March with YOB (who I also need to catch live). Headlining sets are always longer, but Witch Mountain’s shorter set that night did not disappoint.

The rhythm section of Nathan Caron (percussion) and Justin Brown (bass) bulldozed the audience. I could feel the bass notes ricocheting off my own body. Brown’s bass is tingly rumbling wave that mows over the audience. Carson’s drumming sets a slow, hypnotic pace that entrances the observer to succumb to the band’s catchy, doomy groove.

Being a Memphian, I love blues. And blues is evident in guitarist Rob Wrong’s style. His riffs and solos carry a swaggering, swampy twang that would fit perfectly among the boggy backwoods of the Mississippi Delta.

Kayla Dixon’s theatre background emerges in her performance. And I emphasize performance. Her vocal range can instantaneously switch from clean and soulful to a gritty blackened rasp. As a fan of the band, I can confidently assure anyone who hasn’t seen them live that it’s most definitely worth watching. What you hear on the album is what you get live, only better.

Blackest Of The Black Tour Dates