(Comrade Aleks brings us this interview of André Foisy, one of the members of Chicago’s Locrian, whose latest album Infinite Dissolution was released this year on the Relapse label.)

It’s harder to speak about Locrian with every album they record. This trio from Chicago started with extravagant blackened doom / drone sessions, but over time they have just gone astray in labyrinths of sound researching and experiments. Their newer works keep a cinematographic and psychedelic touch; it’s subjective yet it’s close to the truth if you look for truth in extreme music…

What is Locrian? I have no univocal answer for you. Maybe André Foisy will give some hints in the interview we did with him because of Locrian’s release Infinite Dissolution.

Hi André! We haven’t talk with you since Locrian released the split-album with Mamiffer. What did you do all this time?

Thanks for getting in touch. Since we did the split album with Mamiffer, we’ve released some new material and played some great shows. Our most recent release came out in July on Relapse Records and it’s called Infinite Dissolution” In addition, we’ll also be playing some shows this month on the East Coast of the U.S. and we’ll be playing in Europe in January 2016.

In Europe?! Where? How did it happen that you’re going to tour in Europe?

We plan to play some shows in Western Europe. Our European booking agent, Odyssey Booking, is putting it together. If anyone wants to book us, then they can get in touch with Odyssey.

Right, you have the new album Infinite Dissolution on Relapse Records. How did you work over this new record? What kind of message did you put in it?

Infinite Dissolution is inspired by a book called The Sixth Extinction, which discussed how humans are in the midst of a great extinction, the biggest extinction moment since the one that killed the dinosaurs. We hope that the album can help people to have conversations and talk about what’s going on since conversations are the way that humans think together. We don’t present any solutions to this problem though, just fodder for conversation.

Do you feel that the theme of human extinction is actual now? And how can music help to open eyes which are blinded by the propaganda of war, hate, and the values of a consumers’ society?

I don’t think humans will go extinct anytime soon, but we are creating the conditions for other extinctions. There’s a quote from Daniel Quinn’s Ishmael: “You’re captives of a civilizational system that more or less compels you to go on destroying the world in order to live.” Hopefully, this album will help some people to see the bars of our cage of civilization.

Locrian – An Index of Air

Being on a label such as Relapse seems to be very comfortable for any band; what have they left for you to do after release of the album? Do you need to do some things in a DIY way now? Promotion or organizing gig, for example.

Relapse are a great record label. I love working with them. They help a lot with distribution and with helping us to coordinate press around our releases. They are really a small staff though. I’m sure that they have different relationships with each of their artists. We coordinate our own shows and mostly promote our own gigs.

There’s a “KXL” trilogy in the Infinite Dissolution album. How do these songs connect between each other?

There’s a similar musical theme to each of those tracks, but the theme is interpreted differently on each version. “KXL” is a response to the Keystone pipeline, which may or may not be built in North America in order to transport oil.

Keystone pipeline? Never heard about it…

The Keystone XL (KXL) is a proposed tar sands pipeline that would connect Alberta, Canada, with the Gulf Coast refineries that would carry 800,000 barrels a day of tar sands oil across the U.S., to be refined and burned. Tar sands oils has a massive carbon footprint and it sometimes uses more energy to produce than it creates. There are just tons of problems with the KXL pipeline. It’s also a huge threat to the remaining fresh water in N. America.

André, Locrian always tend to experiment with the band’s sound. Which point have you reached with the new album? What have you discovered for yourself working over this record?

This newest record is the most concise one yet. We keep having higher expectations for ourselves and bigger goals. I’ve learned that we should really set higher goals for our next record. 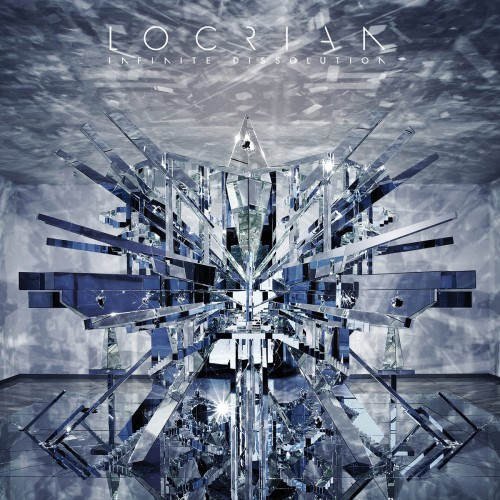 Greg Norman produced Infinite Dissolution. How much of Greg is in the new Locrian?

Greg is an amazing engineer and I love working with him. He really makes it easy for us to focus on playing music and helping us to flesh out our own ideas.

Vocals on the new album are very rare; I guess that they did add a bit of agility, and sharp edges, to your previous works. Why did you decide to reduce it?

We all try to be conscious of when to play and when not to play. There are actually a lot of vocals on the album, but they are often very abstract. For instance, “Dark Shales” has vocals over most of the track, but the vocals almost sound like a synthesizer. The track would be very naked without those vocals.

Yes, and it feels like you use guitars less than ever on this record… Or was it buried under the weight of layers and effects? What kind of effects do you prefer to use on your guitar?

There are a lot of guitars on this album, but there are points where the guitar may not sound like a typical guitar. Typically when I play, I use minimal effects: just delays, distortions, sometimes octave pedals.

At the same time, the new album has fewer black metal elements. Don’t you feel the necessity of this instrument as strongly as before?

There is some black metal in the new album. I think that the elements that we used for the album were appropriate for the theme of the album.

André, do you still feel Locrian’s effectiveness in the format of a trio? Do you see some goals before you which demand including new musicians in the band?

I think that trios work well since there’s space for each musician to improvise. I feel like it’s a really flexible format. If you ever listen to Cream’s farewell concert from 1968, you’ll notice that they are the perfect example of the power of the trio. It’s possible that we’ll play with other musicians in the future. When we do work together, we work quickly, so adding people and voices tends to slow things down.

I have an off-topic question for you: What was the most important book you read in school?

There are a lot of books that have inspired me. For anyone interested in Locrian and our philosophy, then I suggest that they pick up The End of Nature by Bill McKibben. This was written in 1989 and was one of the first books which discussed global warming and its effects for general readers. He argues that nature is now directly affected by the actions of humans and he wrote the book in order to provoke people into taking some sort of action. It’s generally the same mission that we have with Locrian.

André, what’s going on with your project Kwaidan? Is it still active?

Kwaidan is still active, but we haven’t released any new music in a while. Most recently, we recorded a collaboration with a traditional Korean musician. This track was released on the Utech Records compilation. That compilation is available here:

Keith Utech runs the label and his wife recently passed away from cancer. She was an awesome woman and they have two great kids together.

And the same question about your label Ablution Media – what kind of releases do you plan for it now? What about Agarttha?

Ablution Media is actually my press company. I started the company out to help out artists with promoting themselves. I helped out Agarttha because I know that she’s really passionate about what she does and she is an amazing musician. I have put the business on hiatus for the time being, but I will likely take on some new projects in the near future.

André, I remember that besides Locrian, besides Kwaidan, even besides Ablution Media, you give yoga lessons. What’s your progress now? Does vrishchikasana turn out easier now?

Yes! I still teach yoga. Yoga is going well. When I do yoga I feel in my own body, which leads me to feel better in my mind. Yoga helps me to be a better musician too. Yes, vrischchikasana (or Scorpion pose) gets easier when the body gets stronger and more open.

Okay, André, thank you for your time and patience. Let’s sum up – what are Locrian’s plan for the future? And that’s all I had for today, it was good to talk again – good luck!