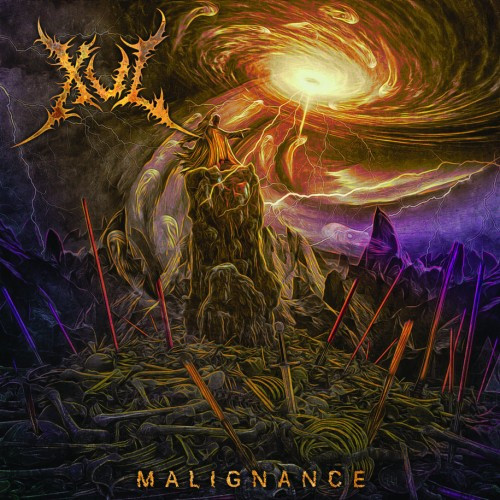 In preparing to write a few words about our premiere of this hair-raising album from XUL, I went back and read what I wrote about a XUL song we premiered earlier this year from their lethal 2015 EP Extinction Necromance, and I couldn’t help but laugh. I think my mind was so exploded by the music that I forgot where I put it. I’m warning you now that the same thing may have happened when I started writing this post after listening to XUL’s Malignance.

That’s the name of this British Columbia band’s 2012 debut album, which was originally self-released and is now getting a gilded reissue by Redefining Darkness Records, with remastering executed by Ken Sorceron (Abigail Williams), eye-catching new artwork by Remy Cuveillier (Headsplit Design), and a previously unreleased bonus track. 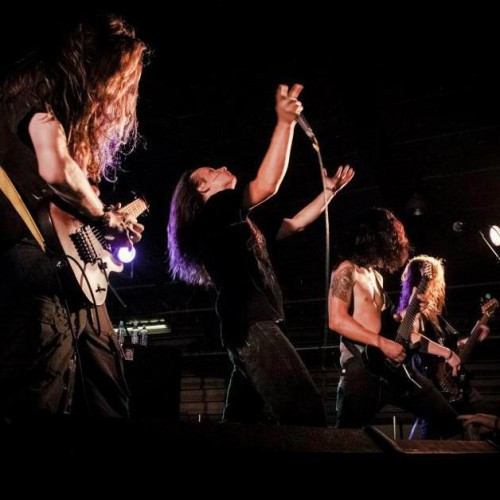 It has become common to describe certain kinds of chilling metal as “explorations of the void”. Malignance does that here and there, but it’s really more accurate to say that this is the kind of music capable of making you void yourself.

For much of its length, it’s a thundering, howling, jaw-dropping explosion of death metal ferocity, leavened with elements of tyrannical black metal. Anchored by a blazing fast and highly weaponized drum assault and lit up like a strobe light by head-spinning technical flair at every position (which increasingly seems to be par for the course with Canadian bands), Malignance is an almost non-stop overpowering assault on the senses.

The songs are written with huge, pavement-cracking grooves, scintillating guitar solos, and enough dynamic tempo changes to simulate the experience of trying to stand upright during a Magnitude 9 earthquake. And on top of that, you get wild, fearsome, filth-encrusted vocals that sound convincingly inhuman (and convincingly deranged).

All of these qualities would alone be entirely satisfactory for listeners who appreciate a massive, spine-splintering experience and enjoy having their brains whipped around in a blender at puree speed. But wait, there’s more!

Somehow, XUL infiltrate these decimating, jet-fueled assaults with an array of memorable guitar melodies and solos — but it doesn’t sound like classic Scandinavian melodic death metal, in part because the music is so furiously dismantling, so intricate, and so technically acrobatic.  And just when you least expect it, they throw in “Winter’s Reign”, an atmospheric piece complete with symphonic keyboards that turns out to be just as good in its own way as all the slashing and burning that surrounds it. (That’s not the only surprise on the album, but I won’t spoil the others.)

Here’s a really scary thought: Three years have passed since this album was released, and XUL are now working on their second full-length, which is projected for released by Redefining Darkness next year. The mind boggles at what these dudes may have learned to do since recording Malignance. Someone should alert FEMA.

This revamped and wholly electrifying version of Malignance will be released on October 30. The album is available for pre-order on Bandcamp (here).