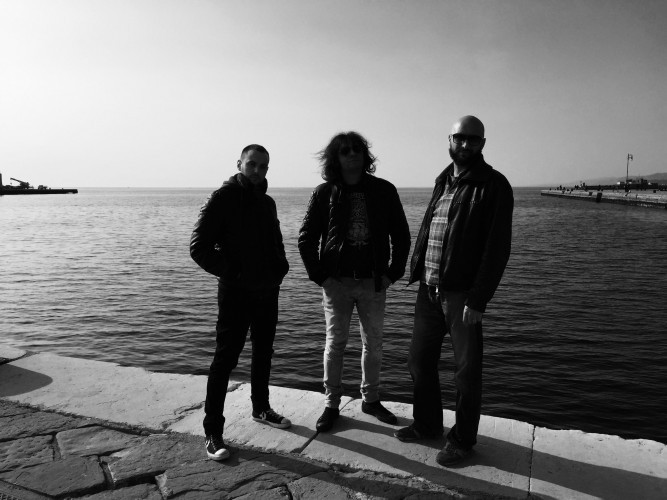 (Comrade Aleks brings us this interview with Andrea from the Italian band Three Eyes Left.)

The angry guys from Three Eyes Left will teach you how to worship Satan through unholy acts of headbanging under heavy and driving doom riffs! This outfit from Italian Bologna started its work in 2004 as a trio: Maic sings and plays guitars, Ste is responsible for drums, and Andrea is a bass-player. So since the band was born, the guys have released three full-length albums; the latest one was put out by Go Down Records in May 2015 and it wears the name of Asmodeus demon. This record is the first part of trilogy; I’ve had a conversation with chief demonologist Andrea and he reveals some aspects of the Three Eyes Left iconoclastin cult.

Hi comrade Andre! How are you? What’s new in the Three Eyes Left camp?

We are writing new material for the next chapter of our Demon Trilogy that began with Asmodeus and we’re trying to do our best with old songs for the next live concert. It will be somber and doomy like hell.

Really? A Demon Trilogy? What’s it?

Yeah… the next album will be the second chapter of a trilogy inspirited by human vices… Asmodeus talks about violence and chaos, the next one will be a sort of forbidden book. It will talk about money and religion and about what the “elite” gives to the society as a result. Satan will always be the main character. Like a director or like a right way… 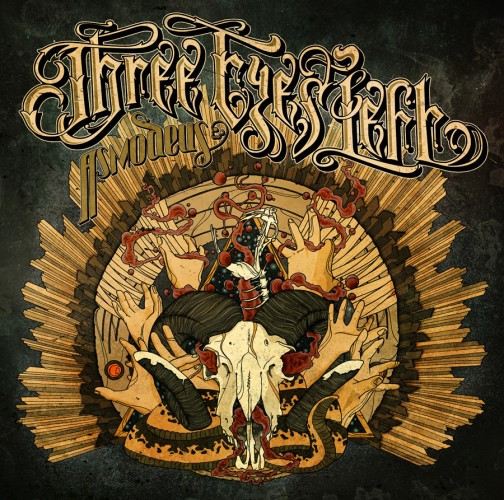 Why did you choose to start with Amodeus? Is it a sort of conceptual album?

Amodeus isn’t a conceptual…I prefer to think that all the songs were written with the same state of mind. In every album you find, I think, a thread that connects songs between them. Concept is for metal fans… I’m joking.

“Somber and doomy like hell” sounds promising, yet a little bit blurred. Will the next album continue the direction of Asmodeus?

The next album is growin’ different in sound and also in mood… riffs are more maleficent. The vocals will be harder. You’ll have to listen and join an ancient cult…

Not long ago the band returned from the Asmodeus tour, and you played in Italy, Slovenia, and Croatia. Quiet an unusual route… What are your impressions of this tour?

Well it was amazing… especially in Trieste and in Slovenia. We found a lot of cool people and the audience was hot. Our mates Omega Sun were really heavy on stage and it was wonderful to enjoy the time with them… really friends for us. I’m sorry for the audience in Croatia ‘cause of technical problems for us. We hope to give them a better performance in the future. The volume was really huge over the three nights on stage…

You know – I’ve got your CD from Marilena Moroni, and she said that Three Eyes Left is a killer band on stage. Do you really play with such dedication?

We try to do our best…we are not professional musicians, so we have to send to the audience the right emotion. We live the concert like a black mass where people can taste the evil of life like we have to say with our songs. I have to thank Marilena for the support. We like to play on stage like dancing on the razor’s edge.

Three Eyes Left – The Devil Walks With Him

You play heavy music, and speaking about tours, most of us (including me) are waiting for cool stories like Ozzy or Motley Crew did on the top of their career. So what about Three Eyes Left? Did you have some extraordinary situations on gigs?

We are good fellas man. I only have to say that every time we go on stage we are not the same persons. Humanity goes away. We are like demons hidden by our minds.

I need to ask you, how did you figure out this name for the band?

The name comes from a thought of inner existence of every one of us…I think that everyone has got a level of mind that is hidden in a well that sometimes comes out. For us maybe it is our music that brings out the emotions that grow in the dark of our souls.

Your first album Silentium Aurum Est was recorded seven years ago. How did you record it? What did it give to you?

A lot of time ago… really a lot… well, it was different. We were four guys that played another music, yeah we were another band. We needed it to build our musical personality and it was our first experience with more professional recording. At that time our sound was influenced more by stoner rock than doom I think… it took a lot of time because of our poor experience, but everything was done with heart and blood… I don’t remember the last time I listened to a song from it. I think I’m not more able to play something of that album, cause that was seven years ago… 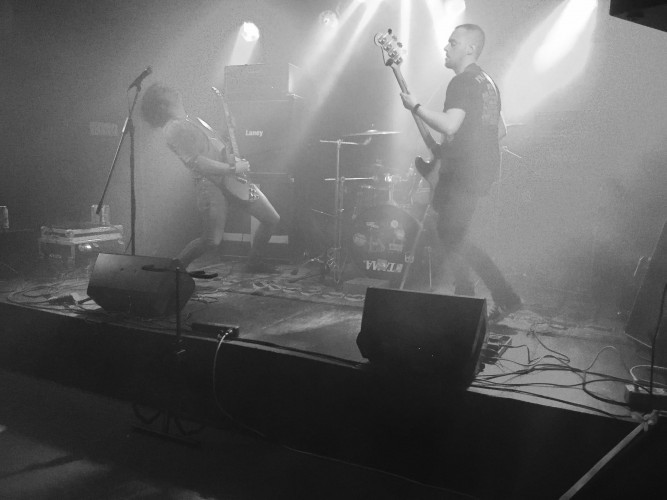 Your next album La Danse Macabre was released by Go Down Records in 2013. Why did it take so long to finish this record?

Only for one reason! Because we work like pigs and because it’s difficult to play in the right way… I’m joking. La Danse Macabre was the first album with a label. It took so long more to change our writing mood because we started after Silentium Aurum Est like a three-piece band, and it was like reinventing everything. After a lot of songs that will never be recorded, we finally found the right way in 2012. We’ve understood that we love a slower and heavier way of playing, and so the songs came out from our worst feelings. When Go Down contacted us after a show in the Sidro club (one of the best clubs I’ve seen in my life), we were ready to keep our songs in an album.

How much does it take to build a reputation for Three Eyes Left?

It will take all the time we will play together (I hope ‘till I die) ’cause we have to grow in every single concert. In every single song, in every single note, because there’s always a way to do it better and every day is different.

You often appeal to the image of the devil in Three Eyes Left’s lyrics, what does it mean for you? What is the personification of evil in your case?

Satan is the man. It’s the personification in daily life of our conflicts. In some ways, we talk of him like a friend who brings you a choice. I’m not a Christian so I don’t think always that the Devil is a mistake, because in some certain ways religion can’t explain to you the right thing to do. Lucifer is a romantic world to explore. He is the imagining of the rebel. Milton talks about him in the perfect way…better to rule in hell than to serve in heaven. 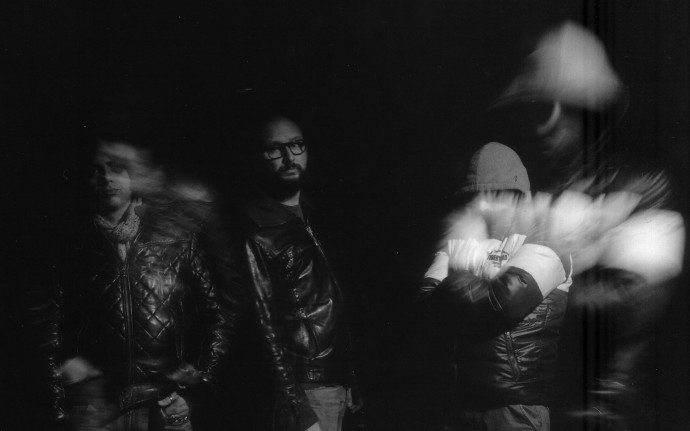 How do you feel a difference between the new album Asmodeus and the two previous works? Does it show your real intentions at that moment?

I think that La Danse Macabre was more “metallic”, and in those songs we wanted to create an immediate sludgy mood. The album talks about revolution, as in the medieval way of meaning the dance of death, and the songs had to be dirty. While in Asmodeus we searched for a sound that could be more representative of an evil mankind coven… If I have to name some bands who influenced us in those days, I have to say Cathedral for La Danse Macabre and Black Sabbath and Blue Cheer for Asmodeus.

Yeah man. Well, I have to say that there’s something of each of the things you’ve said. We talk about what brings humans to choose the evil way. I think that in society like this there are a lot of persons who practice in black magic and join Luciferism. In the same way, to kill people for power is sacrificing culture. The world is the holy warmonger.

Three Eyes Left plays stoner or doom music with different influences, but it seems that you could easily play both a more harsh sludge version of it or a hard psychedelic rock version. What is the core of the band from your point of view? What’s the spirit of Three Eyes Left?

We are just a heavy rock band I think. We join our influences and create our songs only with one idea. The process is to jam on the primary riff and then we find the right mood. We love the desert sound, doom metal, and old heavy psych, so this is our way. It’s really difficult nowadays to find something different, so we only follow what our souls need to express.

What does Three Eyes Left mean for you? Is it art, a trend, or a way of life?

We are not musicians, we join our time in the rehearsal trying to spit bile out of our working days. For us it is an amazing kind of passion.

Andrea, you live in the ancient city of Bologna, how much of Bologna is in Three Eyes Left’s songs? Can we find a shadow of La torre Asinelli in your songs?

Bologna is a never-ending well of inspiration. It’s noir and dark. We are sons of Bologna and our music is dedicated to his madness and his fat beauty.

I’d like to thank you for this interview and wish all the best to you and the two other sons of Bologna! Do you have few words for our readers mate?

Thank you for the chance guy. I hope to see you guys at our gigs and join us drinkin’ good beer and worshippin’ Satan in a dark wood!!!