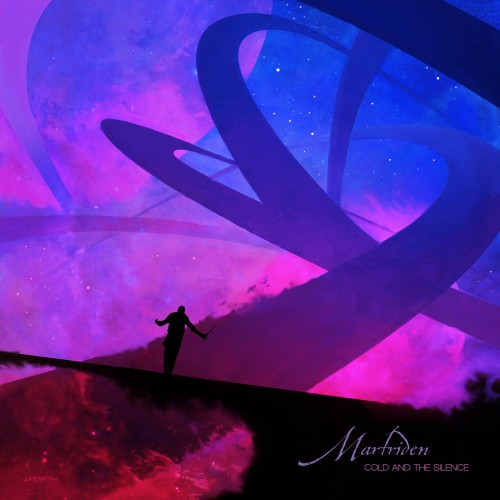 (Andy Synn reviews the first album by Martriden in almost six years, which unexpectedly appeared on Bandcamp earlier this week.)

So formerly Montana-based and now Denver-based Progressive Black Metallers Martriden decided to go the Krallice route with the release of their latest album, and drop it onto Bandcamp earlier this week with little to no fanfare preceding its appearance. Thankfully for all of you, I’m a huge (borderline obese) fan of this band, so the second I spotted the message about its release I dived on it as if it were a live grenade/puppy and have been listening to it almost non-stop ever since.

What I’ve found, however, is that, for whatever reason, this is actually a pretty hard album to review. For me, anyway. I’ve written, deleted, and rewritten so many paragraphs about each track and then scrapped them totally so many times now that the version you’re currently reading bears little to no resemblance to what I originally intended when I first set out to form my thoughts into (semi)coherent sentences.

Largely that’s because the more I listened to the album the more trying to pick apart each track and label its component parts just started to feel overly reductive and futile, everything I was writing failing to get across the impression of creative cohesion that the album gives off, with all its various elements and aspects working in perfect harmony and balance.

Basically, what we have here is (Doctor Who fans take note) a hybrid that’s far greater than the mere sum of its parts.

Despite the five year gap between releases, though (including the departure of the band’s long-time main vocalist Michael Cook), Cold and the Silence still feels like a direct continuation/expansion of the darkly progressive, defiantly blackened vibes embodied on 2010’s Encounter the Monolith, albeit one which (if the artwork didn’t already clue you in) takes some significant steps in a more overtly prog-tinged and enigmatically indulgent direction than ever before.

The closest comparison is, as always, with the infamous Norwegian Space-Vikings known as Enslaved, and it’s clear to me that Cold and the Silence errs closest in tone and feel to the runic quintet’s infamous Below the Lights/Isa era —  a time when they, too, elected to shift their sound firmly into the quantum realms of cosmic, blackened prog, much as Martriden have chosen to do here.

Some of these similarities are of a more superficial nature, granted, with the vocals of Shane Howard, for example, bearing more than a passing resemblance to the commanding growl of Grutle Kjellson (though the cadence of Howard’s delivery frequently echoes that of his predecessor Michael Cook, resulting in a strong line of continuity between albums and incarnations of the band).

Others run a little deeper, however, such as the newly integrated, and extremely prominent, use of gloriously expressive clean vocals as a counterpoint to Howard’s gritty snarl, which serve to accelerate each song into the proggy stratosphere every time they appear (delivered, I believe, by Howard himself… though if they are in fact done by his brother Kyle, who also handles keyboards on Cold and the Silence, then these Enslaved comparisons become even harder to refute).

Most of all, however, the scintillating guitar work evident across these seven tracks demonstrates a prog-infused flair for energetic, creative riffing (pay close attention to the hard-driving opening bars  of “Fear and Dread” for a prime example) and psychedelic cosmic atmosphere, which suggests that although Martriden certainly aren’t slaves to their influences (pun most definitely intended), they’re certainly walking a path that parallels that of their forebears… though its one that’s not without a number of divergent twists and turns of its own.

That being said, although the lithe, intricate bass work (courtesy of enviably talented session bassist Mark Grabowski) hints at unexpected influences from the classic Tech/Prog/Death stylings of latter-day Death and early Cynic (check out the opening bars of “Pendulum” for an immediate example), this is most definitely a Martriden album, through and through.

Across the length and breadth of Cold and the Silence the guitar tandem of Shane Howard and Will Thackeray repeatedly hammer this point home by delivering a riveting array of diamond-sharp, glass-cutting riffs (such as the laser-guided main riff of “Invisible Cities”, or the stuttering, Death Metal inflections present throughout “The Grey”) which sound like no-one else but Martriden – rhythmically, structurally, melodically – and which, hypothetically speaking, could almost have appeared on any of their previous releases.

This solid foundation, this clearly defined sense of self, is exactly what allows the band to experiment and expand their sound on Cold and the Silence, without fear of losing the thread of their identity in the process.

Nowhere is this more noticeable than in the utterly fantastic integration of a multitude of majestic clean vocal parts throughout the album, which eschew the vapid simplicity of poppy melody in favour of a deeper and longer-lasting memorability that exists in service of each track – rather than as its sole focal point.

Whether it’s the solemn resignation evident in the clean-sung refrain of “The Grey” or the mournful melodic passages present in grandiose closer “Consequence”, each of these sections serves to add yet another impressive string to the band’s bow, and despite their undeniable catchiness, there’s never a moment where you find yourself listening to a song just for its clean vocals. They’re all integrated as part of a greater whole, and all the better for it.

In the end it’s taken me almost 700 words to get back to the key point I made right at the start of this review – that this is an album that’s all about balance, an album primarily concerned with exploration and expression, with all these different elements and aspects, from scything riffs to soaring clean vocals, from rippling drum work to evocative keys and subtle acoustic ambience, working in harmony in service of a greater, overarching vision.

So if you’re looking for an album unafraid to paint with vivid, striking colours, unafraid to break with convention and follow a more progressive, creative, and downright compelling path – all without giving an inch in terms of scorching, spitfire riffage and focussed, potent fury – then Cold and the Silence is most definitely the album for you.

25 Responses to “MARTRIDEN: “COLD AND THE SILENCE””