(So far, our year-end LISTMANIA series has mostly been devoted to year-end lists from other sites and print zines, but today we begin rolling out our own lists, and we start with the first of six that Andy Synn is preparing. Every day next week we’ll post his remaining five.)

Such is the chaos that is my life at the moment (in between trying to get my End of Year List/s done, I’ve also been putting together a PhD proposal/application, booking a photo shoot for Beyond Grace, TRYING to book shows for next year for us, and helping some good friends move house) that I almost forgot about my annual semi-traditional round-up of all the great EPs I’ve heard this year!

Yes, yes, I know there are several bloggers and/or sites out there who argue that EPs should be considered right alongside full-length albums when it comes to summing up matters at the end of the year… but I’m not one of them.

No, I think EPs deserve their own category, and their own specific focus, and so I’ve written this little round-up to give some of the year’s shortest, sharpest, releases their due.

Now, if memory serves, I didn’t do a separate list for EPs last year, simply because not enough short-form releases made a big enough impression on me last year to warrant their own column.

However, that’s very clearly not the case where 2015 was concerned, as this year really has yielded a bumper crop of EPs designed to suit most, if not all, tastes.

Rather than rate all of them and put them into a strict numerical order I’m just going to treat this column like a general overview/round-up of this year’s shortest and sweetest releases, and try to pick out the ones that really had an impact on my listening habits over the past twelve months.

That being said, although I’m going to go through these in alphabetical order, I’ve actually picked out a Top 5 of my personal favourites, which you’ll find at the bottom of the piece…

For now though, please enjoy this (in no way comprehensive) list of EPs, complete with links to where they can all be sampled, starting with two of the most recent releases.

AN AUTUMN FOR CRIPPLED CHILDREN

Only a few days ago experimental arch-provocateurs An Autumn For Crippled Children released a Pay What You Want 2-track EP entitled Portugal simply for the thrill of it, and you can check it out, in all its wicked, shamelessly colourful glory, over at:

Twisty-turny Prog-Metal types Barishi definitely ramped up the aggression and dissonance on Endless Howl (the follow-up to their brilliant, and hard to classify, self-titled album) this year, but did so without sacrificing one iota of their unique sense of freewheeling weirdness or chaotic energy.

Cleveland screamers From The Hellmouth (featuring ex-Abigail Williams/current-The Black Dahlia Murder drummer Alan Cassidy) unleashed their own particular brand of sonic nastiness with their debut (self-titled) EP back in August, gifting the world with five tracks of morbidly aggressive, gruesomely nasty, and brutally bloodsoaked Death Metal in the process.

True Norwegian (by way of Tehran) Black Metal disciples From The Vastland (aka Sina – all instruments/vocals) followed up last year’s rather good Temple of Daevas album with a 3-track EP entitled Blackhearts, specially written and recorded for the film of the same name (which you can find out more about HERE).

Italian technophiles Human Improvement Process were one of my favourite new discoveries of the year (and a band I definitely would like to play some shows with if possible), and Enemies of the Sun is a brilliant introduction to their complex, contorted, but catchy-as-hell, sound.

(FYI – I’d also urge you to check out their debut album Deafening Dissonant Millenium as well, if you’re a fan of the Gorod/Anata/Augury school of quasi-progressive/experimental Tech Deathery.)

It was Islander’s timely post back in April which originally put the catastrophic maelstrom of Malthusian’s Below the Hengiform on my radar, so now seems like the perfect time to pay it forwards and draw some more attention to the band’s uniquely hallucinogenic blending of Black and Death Metal sonic agony.

Though 1557 – Rites of Nullification was/is one of my favourite albums of the year, we shouldn’t forget that Sfaíra Ti̱s Fo̱tiás was the first vital step which signalled the rebirth of Swedish warlocks Mephorash, with both the EP’s brilliantly blistering tracks – “The Hendecasyllabics of Death” and “Sfaíra Ti̱s Fo̱tiás” – prophesying even greater things to come.

Those ever-antagonistic Dutch death-dealers The Monolith Deathcult took the bold step of reworking, reinterpreting, re-recording, and just generally giving a drastic overhaul to a number of tracks from their hard-to-find debut album The Apotheosis in 2015, with the result being a gloriously heavy, headsmashingly good EP called Bloodcvlts, which you can find reviewed HERE.

Via my monthly gig moonlighting as a reviewer for London Metal Monthly I came across the latest EP by Greek sensations Varathron, whose three new tracks (which are accompanied by four additional, and fantastic, live recordings) offer up a plethora of mystical metallic delights. (Editor’s Intrusion: While Andy was moonlighting, others might have come across MY REVIEW of this fantastic EP here.)

South-Wales savages Venom Prison gave us a ripping new release called The Primal Chaos way back in the month of July, which delivered four precisely targeted blasts of bone-grinding Death Metal savagery, tinged with just a hint of brutish, ugly hardcore, that are well worth damaging your ears for.

Now, you may (or may not) have noticed several big omissions from the list so far… but fear not! Because now it’s time to lay what’s left of my tattered reputation on the line… with my list of my Top 5 Favourite EPs of 2015!

Hold on to your hats… it’s about to get biblical in here! 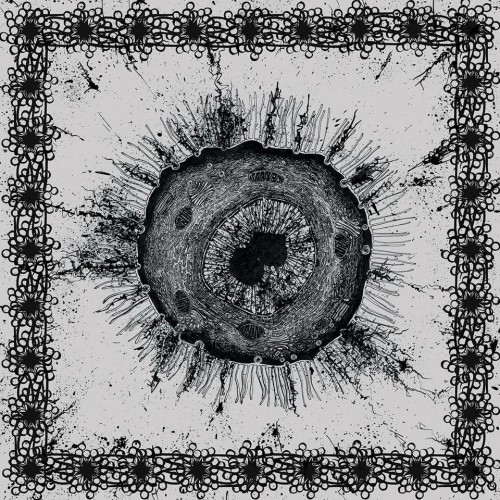 Coming in at number 5 like a bat out of hell, angular aggressors Pyrrhon offer absolutely no quarter with the abrasive sandstorm of riffs and rage that is Growth Without End, the EP’s sheer, unrepentant ferocity and disgustingly dissonant hooks assuring it a well-deserved place on this particular end of year list. To quote from my own review:

From the regurgitated venom of repulsive opener “Cancer Mantra”, through the fever-frenzied bludgeon of “Forget Yourself” and the twitchy, angular assault of existential angst that is “The Mass”, all the way to the bowel-loosening creep of “Viral Content” and the gluttonous, gut-wrenching cacophony of closer “Turing’s Revenge”, Growth Without End is the sound of a band serving up their own deviant discharge on a silver platter, and asking you, daring you, to dig in.

And although it’s possible, if you look closely enough, to pick out chunks of recognisable matter amongst the band’s filthy sonic stew – a sprinkling of Gorguts here, a dash of Cephalic Carnage there – the resultant helping of gastronomic genocide is the sort of dish that you’ll always be careful not to look at too closely, lest you discover what true horrors you’re consuming.

So grab your knives and forks and open wide. Savour every meaty metallic morsel of this EP. Chew and suck and swallow and make sure to lick your fingers clean once you’re done. 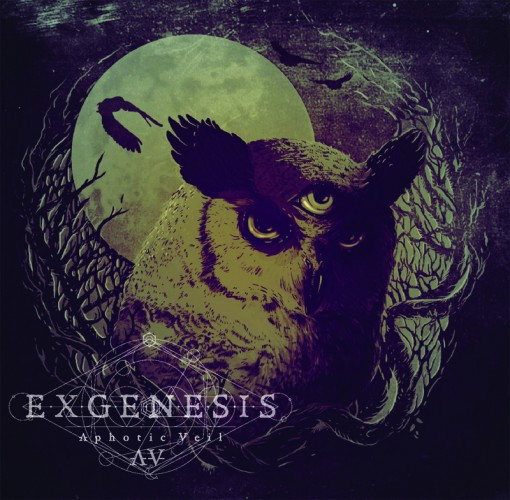 Taking the fourth-place position with doom-laden, gloom-soaked grace and gravitas, the international duo who combine to form Exgenesis captured my attention, and my everlasting affections, with their stunning debut EP Aphotic Veil all the way back in March, and even then I knew it would be one of the year’s biggest and best discoveries for me.

Plus, it’s probably the best release to EVER feature a psychic owl on the front cover… so it has that going for it too!

To quote a certain stunningly handsome and intelligent reviewer:

Effortlessly and irresistibly compelling throughout, with any justice the debut EP by Exgenesis will come to be seen as more than just another stellar entry in the ever-growing canon of European Death/Doom, but rather as a vital catalyst in the much-needed renaissance of the genre. It’s really that good.

Indeed, although the sound may be a familiar one, Aphotic Veil simply feels fresher and more alive with potential than many of the more established acts who deal in this same mix of deathly doom and melodic gloom, and hopefully stands as a harbinger of even greater things to come from these two men – students of the style who are well on their way to becoming masters in their own right. 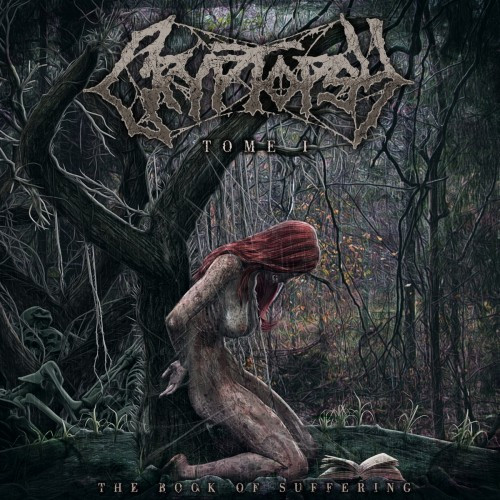 The only EP of the five which I didn’t actually review myself, taking bronze we have the legendary Cryptopsy with Part 1 of their ongoing series of EPs, The Book of Suffering, which delivers four nearly lethal doses of cripplingly brutal Tech Death that showcase the Canadian quartet right back at the top of their game.

Whether it’s the pneumatic jackhammer assault and disembowelling grooves of “Detritus (The One They Kept)”… the murderous intensity and convulsive rhythms of “The Knife, The Head, and What Remains”… the frantic, feral assault of “Halothane Glow” (with its frenzied cacophony of twitchy, disharmonic riffs and blistered, subtly melodic tremolo runs)… or the backbreaking blend of hooks and heaviness that is closer “Framed by Blood”, there’s not a single moment of waste or weakness on display on this EP.

Indeed, every single member of the band is resolutely set to “kill” on Tome I, from Flo’s always stupefying drum work, to McGachy’s ever more sadistic and unhinged vocals, to the string-slinging pairing of Christian Donaldson on guitar and Olivier Pinard on bass – with the latter two really shining on this EP and resolutely stepping outside the shadows of their predecessors in the process.

If this were a more impartial list I’d be very tempted to call this the EP of the year… but it’s not an impartial list, so I’ll just say that The Book of Suffering: Tome I indicates that Flo Mounier and his merry band of murderers are still very much “in the zone” after 2012’s killer self-titled album… possibly now more than ever!

Bring on Tome II I say! 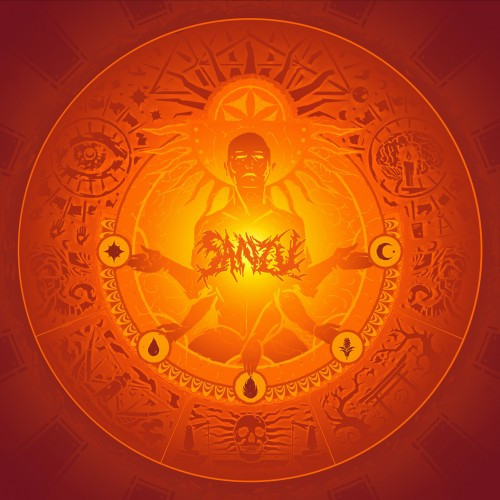 In second place – though only just – newly-awakened Aussie titans Sanzu take the silver medal with the utterly crushing Painless EP, which instantly cemented the band as one of my new favourites (to the extent where I immediately dropped some of my well-earned cash on a pre-order of their album too… keep your eyes peeled for that making some prominent reappearances next week btw!)

A great man once wrote about this EP that:

…Painless happens to be one of the best releases I’ve heard this year… [and] while the shape and the form of the band’s monstrous Death Metal sound is certainly a familiar one in many ways, what we might just have here is an enhanced mutation. One more aggressive and abrasive, designed for maximum killing capacity..

And I stand by that assessment!

The lion’s share of the praise and glory must go to French crushers Barús, however, whose self-titled EP has been one of my top releases of the last twelve months and has taken up a near-permanent position in my regular listening rotation ever since I stumbled across it back in June and began throwing around references to everyone from Triptykon to Ion Dissonance to Ulcerate like they were going out of fashion!

Welding the mutated megaton guitar heft of Meshuggah at their slowest and heaviest to a heaving undercurrent of soul-crushing Doom and touches of the sort of hypnotic, almost ritualistic, atmosphere that would make your average occult-obsessed Black Metal band turn green(er) with envy, French Death Metal types Barús have managed to create something with their debut EP that simultaneously embraces and defies convention – something utterly dense and uncompromising, yet surprisingly progressive and introspective in nature.

Yes… I have no hesitation at all in crowning this little number as my favourite EP of 2015.

In fact, I think I’m going to go and listen to it again right now!