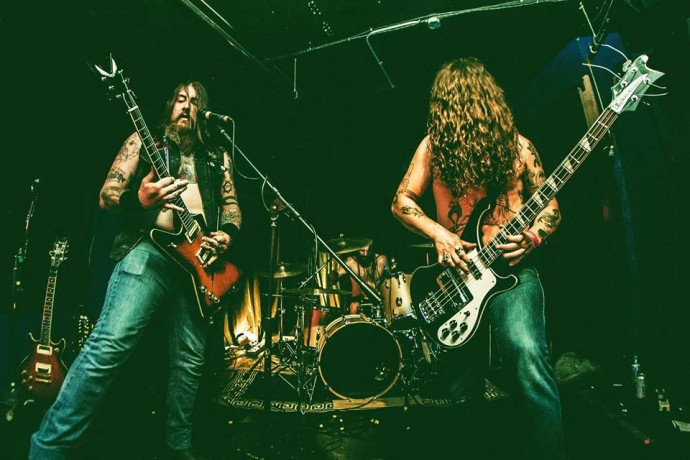 As it seems that I’ve managed to escape from the Italian doom mafia, I had some time to reveal something new for our loyal readers who have enough patience for slow and heavy stuff. Wounded Giant came from Seattle (Hey! Islander! Is it true?!), and they are about slow, dark, heavy, and a bit psychedelic horror doom metal.

Drums are played by Alex Bytnar, bass is played by Dylan A. Rogers, and Bobby James displays fantastic skill singing and playing the guitar at the same time. What does he sing about? About Clive Barker sadistic nightmares, Lovecraftian horrors, and other things that mostly lie between those two mentioned above. So Bobby is here, and he has something to say.

Hail Bobby! I’m glad you’ve found some time to talk about the band. So first of all Wounded Giant is a remarkable and expressive name, how did you invent it?

Hails right back at ya!

It’s kind of a long story that is best told by our drummer Alex, preferably after a few shots of tequila. The short version: He was on the road with an old band, shooting off fireworks down a drainage pipe in a park (you know, normal tour stuff, haha)… apparently it woke up this old homeless wizard dude in strange hand-sewn clothes with white dreds who came up to them and started laying down some heavy knowledge like, ‘beware the Frozen Dragon and the Infinite Monolith of Slavery’, and all kinds of esoteric mindfuckery. The Wounded Giant was one of the characters in his rant… like I said, hard to explain.

Cool story bro! The band has been active since 2012. How was it started? What was on your mind when you gave birth to Wounded Giant?

Alex and I worked together, and our bands were winding down, so we started jamming to keep our spirits up. After our original bass player had to tap out due to his scheduling, Dylan came in and learned our songs in a week, jumped in the van, and the rest is history.

As far as a philosophy behind the band, it’s just our goal to write what we would want to hear. We really look up to bands like Thin Lizzy and the Scorps for not giving a shit about genres, just playing what they like. Our goal is to take risks and try our damnedest to do our own thing. 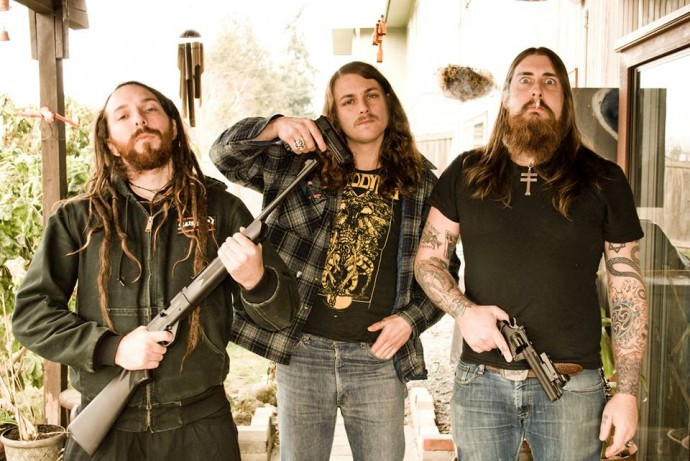 But I bet that Thin Lizzy and Scorps are last things that get into your mind when you hear Wounded Giant. Your music is labeled as psychedelic doom, do you agree with that?

There are specific riffs that I hear our Lizzy/ Scorps influence in, but I wouldn’t expect most people to connect those dots unless they’re listening for them. All bands are standing on the shoulders of their forebears when it comes to influence, just like the old timers were with the dudes before them. All you can do is play what comes naturally to you, while pushing yourself as hard as you can. As far as being called ‘psyechedelic doom’, that makes sense, I guess. I try not to analyze it too much. We are what we are, and as long as people dig the riffs, they can call it ‘post pre-metal anti-metalcore deviant sludge-prog K-Pop D-beat’ for all I care, haha. Was that a crotchety enough answer?

Speaking about the band’s activity I need to point that you work in a pretty intensive tempo, as you released the first full-length in 2013, and three smaller records after it. What drives you to work without stop?

Life is short, we just want to get out there and riff, party, and see the world. Time away from music drives us crazy. Stay hungry, kids.

What about gigs? How often and where do you usually play? Do you have a dream tour in mind? A big one to cross all of the USA or hit the road with some cool band?

We’ve slowed down a little bit as far as how many gigs we play. We’ve been buckling down and working on our next release, which is time consuming due to our work schedules. We were hitting it really hard for a couple years, now that we’re a little more established, we try to only play locally once every month or so with touring bands. We tour as much as we can, when we can. My dream tour would be worldwide with Yob, High on Fire, and Monster Magnet, haha. But that’s just me. Or since we’re fantasizing, maybe ZZ Top, The Stooges, and Black Sabbath? 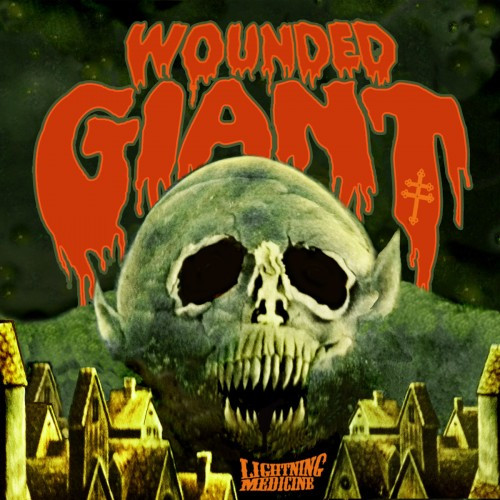 Lightning Medicine Cloud was a rare white buffalo, born in 2011. The White Buffalo Woman is a goddess that is sacred to many First Nations people and the baby (WMC) was seen as a herald for peace. The song that gives the album its name was inspired by my anger at a brutal Nazi attack on a Native American family that same year.

Lightning storms followed almost every date on the first tour to support that record, even in places where it’s not common, like Seattle. It was pretty intense. I also just read while I’m writing this that Lightning Medicine Cloud, and his mother and father, were assassinated right before his first birthday, and there are a bunch of conspiracy theories. Go figure.

Wounded Giant’s first album sounds ominous, dark, raw, and psychedelic sometimes. What are the necessary components of your sound?

Hmmmm… Tequila? Weed? Really it’s just what comes out when we get together. I think we all have different yet complementary influences, if you don’t mind me tooting my own horn.

Hah, well, do you have a song which you don’t remember… well, how it was recorded or composed?

Probably? But I can’t remember a specific one right now…

You work as a trio, how do you share responsibilities among each other? Do you have a dictator-songwriter in the band or do you collaborate in a democratic way?

We do our damnedest to maintain a democracy. Everyone wears different hats with different responsibilities. When you’re a trio, no one can hide in the back. It’s all out there flappin’ in the wind. 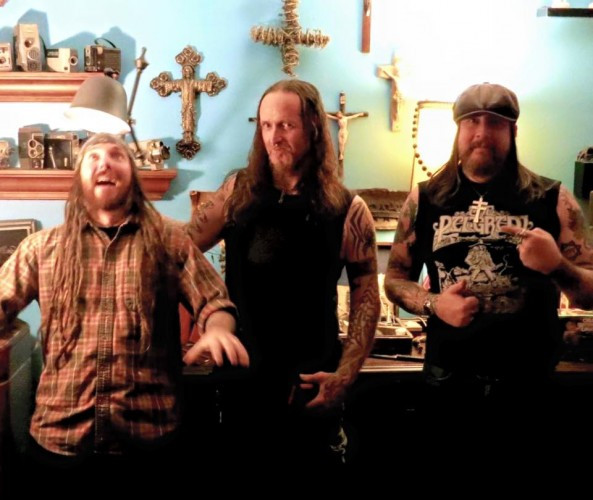 You have at least two songs inspired by Clive Barker stories, “King Rawhead” and “The Road to Midian”. What do you like the most in his book? And do you think that he abused too much the same plots and methods to scare his readers?

Hahaha, I like your question. Yeah, they’re both inspired by him, at least the titles. I mostly like his way with words, especially when it comes to putting you in the passenger seat of every character that is brutally murdered. The Books of Blood are my favorite jams by him. Yeah, he repeats themes sometimes, but don’t we all? I’m currently in the middle of reading Coldheart Canyon right now. I hadn’t read anything by him in years, ‘til recently.

Did you watch the Books of Blood movie? I’ve seen Midnight Meat Train and it wasn’t something special.

I saw Midnight Meat Train. I thought it was decent, just didn’t like the CGI blood spatter. Use real blood packs, goddamn it! I watched about fifteen minutes of Dread, but the modern Emo-ish vibe killed it for me, and as soon as I got to the club scene, I almost threw the DVD at the wall. Hahaha. I hear rumors that Clive is gonna get back in the director’s chair for some jams, which I’m pretty stoked on.

Also you have a song “Rats in the Walls” based on a Lovecraft story. How do you see his impact on the doom scene?

Lovecraft, Mary Shelley, and Poe are the founders of modern horror. I mean, how could he not affect everything? I’ve been obsessed with his ideas since I was in my early teens, and can’t really imagine I’m the only one. Heavy metal will always be at least subtly influenced by him whether they know it or not. For WG, horror movies are a pretty big influence in general. Our drummer Alex was a make-up artist for all kinds of gnarly horror flicks when he lived in L.A.

Lovecraftian myths are much more popular in doom music than Barker’s stories. Why do you think that is so?

Hell, I don’t know. Maybe because of the more sexual and masochistic themes in Clive Barker’s stories? One of the reasons I like older bands like Judas Priest and Dio, is because they would shamelessly tackle these topics. I mean, Barker himself called “Rawhead Rex” a simple story about a giant dick monster that can only be defeated by the power of pussy.

By the way, all opinions given here are not necessarily the same as my bandmates, hahaha.

Your last release is the Live Weird Doom album. What’s the story behind it? And isn’t it a good time to work on a new full-length record?

STB Records recently sold out two runs of a split 12’’ we did with the Arizona doom band Goya. I believe that was released after the tape, which was a live bootleg from Death Fest that we approved, and didn’t put out ourselves.

We just spent five days down in Oregon tracking for our next full-length with the always amazing Billy Anderson behind the soundboard. He’s recorded some of our other bands, and some of our favorite records, so we’re pretty pumped about it. We should be finished tracking in February. 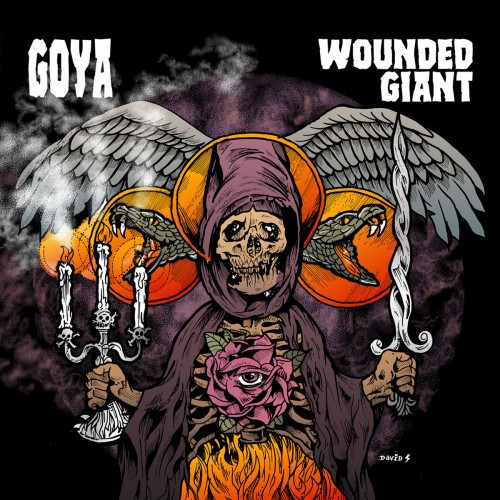 Oh, good news! Which details can you already share with us about this next release?

It’ll be released by STB Records in early summer if all goes according to plan. Steve, the guy who runs the label, makes really nice slices of vinyl, real thought and quality goes into every step of his process, so that the people who buy them have something solid and well-made for their bucks.

This record is a bit more pissed off than the last one, less stoney and more violent. A lot of peaks and valleys, not just slower riffs. Alex has some drum patterns that blow my mind, and Dylan has some bass runs that fly way higher than most bands in the Doom genre try to go. There will also be a 7’’ with a Devo cover that I hope will turn a few heads.

Thanks Bobby for this interview. I hope to hear soon from Wounded Giant! Do you have a few more advices for our readers on how to win friends and influence people?

My pleasure, thank you! Oh, you’ll be hearing from us. Advice?

NEVER PISS IN THE WIND, AND NEVER KISS THE SNAKE.

DOOM FROM THE WOMB TO THE TOMB.