Oh, this is a bad sign: I’ve let the entire week go by without a new installment in our list of last year’s Most Infectious Extreme Metal Songs, yet I had promised myself I would finish the list by the end of January. Just too many other things going on, both with the blog and my own inconvenient life outside the blog.

Anyway, with renewed hopes that I can get back on a consistent track, here are two more entries — neither of them easy on the soul, neither of them exactly straight-forward toe-tappers, but both of them intense experiences, and the kind of music that seeps into your head like poison and comes back to haunt you.

This Finnish band produced one of the best album titles of 2015 — Through Lung and Heart — and it also brought us a fantastic piece of album art (by Manuel Tinnemans). For a debut full-length, it also made quite an immediate and striking impact. 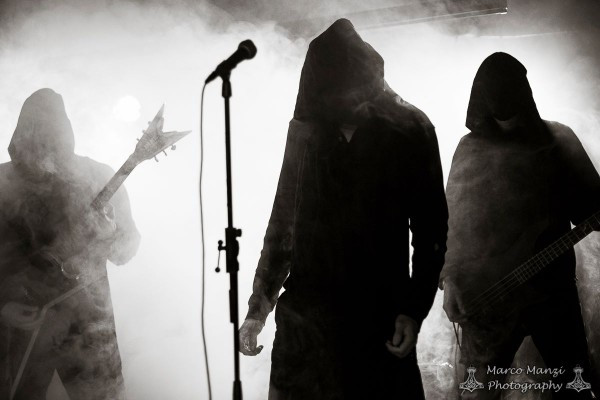 We premiered one song from the album (“Decayed Son of Earth”) that I seriously considered for this list. It was almost a toss-up between that one and the one I chose — “The Dreaming Tombs”. When I first heard this song, I spilled these words about it:

“The Dreaming Tombs” is an unmitigated onslaught of percussive hammer blows, howling riffs, and wretched vocal extremity. The music swirls like a cyclonic vortex, broken in places by a massive doom-drenched stomps. It’s bleak, black, brutally ferocious music that very effectively creates an atmosphere of calamity and collapse.

I might just as well have chosen the words Austin Weber crafted in describing the song we premiered:

While most black metal hints at evil or masquerades as such, Devouring Star is the real, uglier-than-sin deal, with “Decayed Son Of Earth” serving as a carnal carnival of cataclysmic rage whose disgusting majesty cannot be ignored.

Well, choices must be made, and I made one. And I would add to the descriptions above: For all its intense ferocity, I’ve found this really is a very infectious song (in all senses of the word). Devouring Star remains a band to watch closely in the future.

“Infectious” isn’t usually a word that normally comes to mind when I think about songs more than 13 minutes in length. Long songs, if written well, tend to change, transitioning between multiple movements and moods (otherwise, they risk becoming monotonous). They may include moments that stick in the mind, but how often can you really replay them in your head all the way through? Well, here’s one.

I wrote a lot about the Untitled 2015 album by the Minneapolis band False, including a long review. Even before that, I scribbled these words about the first song I heard from the album — “Hedgecraft” — which is the one I think belongs on this list:

It’s the last of four long tracks on an album that’s an hour long, and it’s utterly gripping right from the start, driven hard by a galvanizing drum performance and deep, thrumming bass tones. The vibrating guitar melodies move in huge waves, giving the music a mystic aura that seeps into your head, casting an unshakable spell, while Rachel’s no-holds-barred, panther-like growls and shrieks are ravaging enough to draw blood.

The song has undeniable power — enhanced by a beautiful approach to production that allows all the band members’ performances to shine with clarity — and it’s also highly memorable; for a song over 13 minutes long, you can’t get it out of your head. Overall, it’s just… stunning.

And it still is — stunning, and memorable.