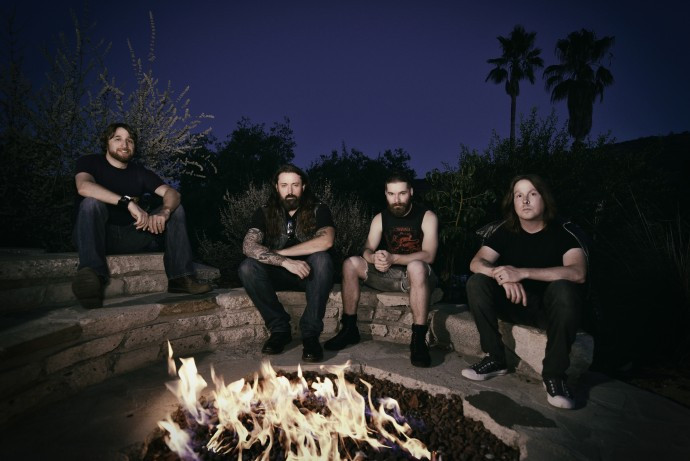 Behold! The Monolith lived through some changes since the release of their second album Defender, Redeemist in 2012, but they returned reinforced and fresh in September 2015 with a brand new record, Architects of the Void – a merciless, heavy, and brutal album. Guitarist Matt Price, the band’s founder, brings the Word of a pilgrimage to Europe and other news from their camp. 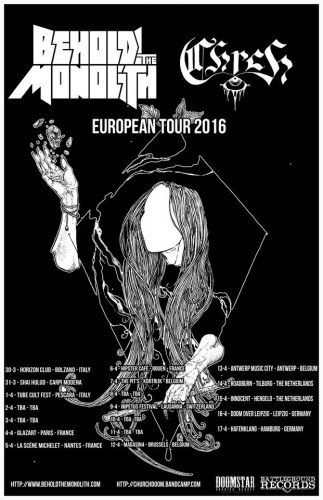 Hello Matt! How are you? How is it in Los Angeles?

Things are good! We are getting ready for our next show and getting things together and finalized for our upcoming European tour and Roadburn appearance!

What do you usually do besides rehearsals to prepare yourself for such tours?

Financially prepare a bit, I guess. Take a look at the routing and mileage versus the guarantees and make sure we’re prepared. Make sure we get the time off work… that kind of stuff.

What were the most crushing gigs you ever played with the band? Can you remember the loudest gig, the most anarchic gig, and the most plain one?

That’s a tough one. We were a bit louder and using older amps in the early days. But when we started writing some faster stuff the drums would just get lost. The gigs keep getting better and better but the first one we did with the new lineup in LA felt really epic!

What is most difficult for you in touring? How do you solve that question on your job by the way?

Probably just juggling finances. I love getting out on the road once I’m out there. 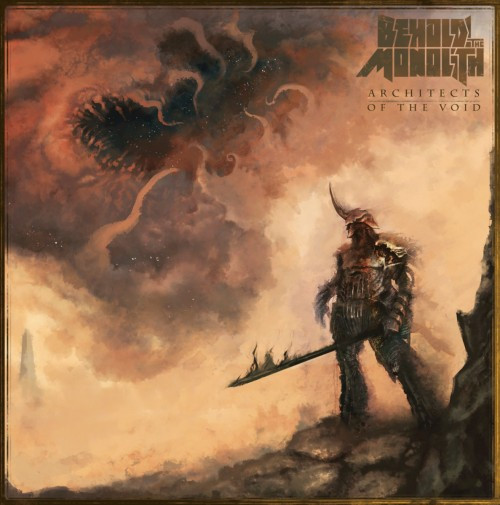 Matt, your latest album Architects of the Void was self-released again and I wonder if it really was a problem for Behold! The Monolith to find a fair label to release the record?

It hasn’t been a “problem” as we haven’t solicited any labels. We basically made a decision to keep things in-house until the right situation presents itself. We’ve pretty much done the same with our other two albums, although the response to this one has been quite a bit bigger. That being said, we are not against working with a label… especially as things have gotten busier. We’ve had a few offers, but nothing that makes sense to sign into right now. It can be a bit of work and financial investment, but we still have a handle on things, as of right now anyway. A stateside booking agent would be nice though.

Are you meaning that you deal with all organizational questions concerning tours strictly in a DIY manner?

So far in the states yes. We’ve had some help here and there. And Ryan Avery, who has since launched Midnight Collective, helped us put together what was supposed to be our first US tour, but unfortunatly Kevin passed away just a few weeks before that was to start. I’d like to work with someone on the booking end… maybe get out there a bit more!

This album is the first you recorded with new members Jason and Jordan. Was it difficult to find the right people?

Not really. It took a little time, but everything as far as finding those guys happened really naturally. Jason was the first person Chase and I thought about and the first person we jammed with. With Jordan, it was just a chance meeting through mutual friends at a Mastodon show. Everything just kinda fell into place when it was supposed to.

How did you describe to them what you were going to achieve on Architects of the Void? What part did they take in composing new songs?

Well, I did a lot of rough demos and stuff at home. Those seem like the best way to describe stuff haha. And I knew we were going for something a bit more relentlessly “heavy” and darker than the last one. I come up with most of the ideas musically, but it’s always open for input from the others. Musically, I’m the main protagonist but it is still very much a band creatively. Jason helped shape where the music on “Philosopher’s Blade” went quite a bit actually. Jordan just kind of did his thing. He had some different ideas as we went along, but the first ideas and off-the-cuff stuff was usually the best. That seems to be the case a lot in music, at least in my experience.

This time you worked in the studio with the well-known Billy Anderson. How did you collaborate with him? Who usually had the last word when you worked out these tracks?

I think the band pretty much had the last word, but we saw pretty eye-to-eye with him on what it should sound like. Billy did have some cool arrangement ideas that we wound up using that gave the vocals a bit more space and some of the riffs some more breathing room. And he is a fucking wizard as far as vibe and layering things and pulling out great performances! After we did all of the main tracking he was on the road with Agalloch, and he would email me little ideas here and there. The ear candy stuff. So I’m lucky I have a home studio setup so I’d record the little things and send them to him. A lot of those just brought out the vibe… cool headphone stuff. 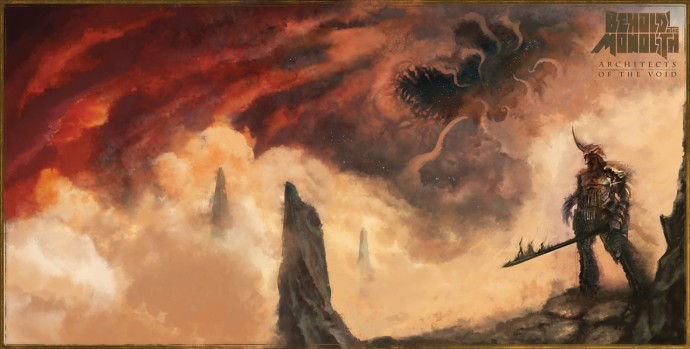 Matt, Behold! The Monolith is considered a doom band first of all, but the further the band moves the more variations you add to your songs. It seemed that you found your own way on the Defender, Redeemist album, but you somehow found something to improve, and Architects of the Void differs from its predecessors. Do you feel balance or limits in your experiments?

I suppose I feel balance. I could see someone getting frustrated because we hint at all these different Metal “sub-genres”, but it makes sense to me. We’re kind of a Doom Metal band and then we are also a thrashy thing or a Black Metal inspired thing. It makes sense to me because it’s all the stuff I love in heavy music, and it doesn’t feel disconnected to me. Personnally I think all the sub-genres of sub-genres stuff is kinda silly after a certain point. And I guess I don’t have the attention span to do a slow Doom album from beginning to end. I guess I get bored too easily and like it when the gears get shifted.

The Architects of the Void songs mostly have a complex structure — there are changes pace, a lot of layers, and blends of different genres. How did you decide when certain songs were ready?

Usually just when it feels right. That has always been our barometer. When the band plays it and it feels complete and nothing feels forced. If anything feels really forced to us we don’t do it, we just throw it away.

Behold! The Monolith – We Are Worm

The songs on Defender, Redeemist have abstract and fantastic topics. What are your new songs about?

That would probably be a better question for Jordan, but overall I’d say the song topics and lyrics are way more abstract on this new one. I think our main priority on this one was the overall sonic delivery. But I’m a big fan of that kind of thing.

Can you pick out one song from each album which represents the best of the band in that period, or — better to say — the spirit of Behold! The Monolith at different stages?

For me maybe “Elders” from the self-titled album. For Defender, Redeemist it’s a tie between “We Are The Worm” and “Cast on the Black/Lamentor/Guided By The Southern Cross”, two very different songs. For Architects of the Void, most days it would probably be “Lord of Bones”, but could just as easily be “The Mithriditist” or “Philosopher’s Blade”. Sorry I don’t have a straighter answer for that one haha.

Split-albums are always something special, a sort of unity inside some musical genre. Do you plan to record a song or two for some split-album?

We would like to! We’ve been approached about it and talked to other bands about it. Right now we would have to go record something, as we don’t really have any extra stuff lying around. Maybe when we get back from Europe!

Matt, what do you usually put in your songs? What goes first — a story, an emotional content, or just music?

It usually just starts as a riff or a chord progression and kind of builds outwards from there. There was some emotional stuff driving the ideas for this last one, as opposed to Defender, Redeemist where we were driven more by sounds and periods of Metal that we were inspired by, if that makes sense. And on that one we had an outline of a sort of story that helped us assemble things, although it really didn’t wind up being a concept album at the end of the day.

Behold! The Monolith – Lord of Bones

I believe that you’ve heard this question every time you have released a new album, but let us try again – can you predict which direction Behold! The Monolith will take in the next release?

We have some ideas. Maybe branch out a bit more with the arrangements and vocal ideas. I think we learned a lot this last time. Maybe tighten up the songwriting a little, but ultimately let it just be the next Behold! The Monolith album. We have ideas, but we never force anything, so until we get back to that point it’s hard to say.

Thanks for your patience Matt! That was my last question for today, God speed Behold! The Monolith in the forthcoming European tour! Do you have a few more words for our readers?

Thanks to everyone who has stuck with us and been supportive! And thanks to anyone who has actually bought our stuff. That really helps a lot these days lol. But either way thanks for listening! And if we are playing anywhere near you in Europe or the States this year, come on out! We still have some cool stuff to announce in the upcoming weeks and months. Cheers!

One Response to “AN NCS INTERVIEW: BEHOLD! THE MONOLITH (MATT PRICE)”