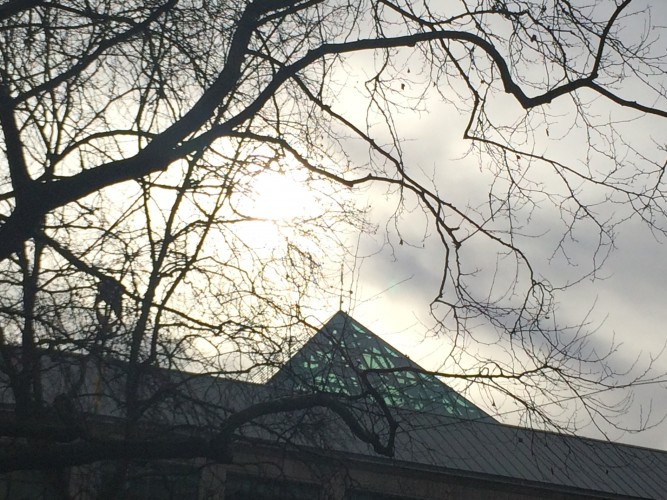 And speaking of good cocktails, this had something to do with the lack of punctuality on the second night of Famine: 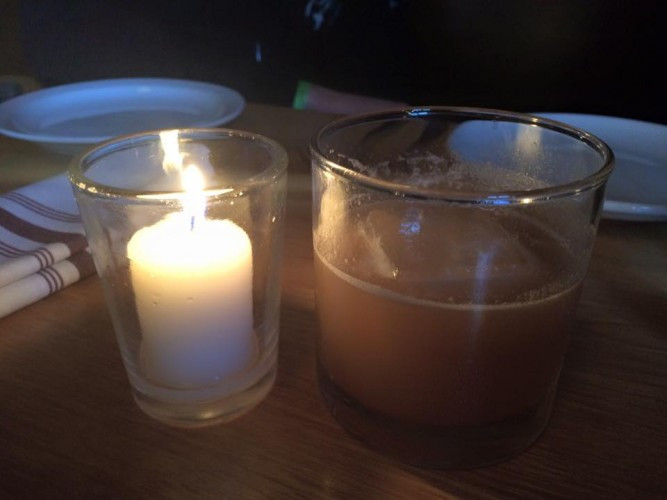 This concoction, served at Portland’s Laurelhurst Market, is called “Smoke Signals“. It’s made with rye, amontillado sherry, pecan syrup, lemon juice, and a smoked ice cube. As the ice cube melts, it adds a smoky flavor to a drink that tastes damned good from the first sip. After the first three of them, I felt like a god. We left for Panic Room before I could order a fourth one. Probably for the best; after a fourth one I might have begun speaking to God. (I later found a detailed recipe for the drink here.)

Even with the late arrival, I still didn’t see all the remaining bands Saturday night, but below I’ve jotted a few notes about the ones I saw that I liked the best, and included a few of my own blurry photos. And at the very end of this post I have one bonus item, so keep going after the review of the last band.

Apart from the fact that I had some great music experiences at this fest, I also want to compliment the people who ran the event for all their hard work. Everyone I encountered who had anything to do with the “customer service” was very cool, very friendly, from the security guys to the hard-working bartenders; there wasn’t too much dead space in between the sets; and I liked the quirkily configured venue. I also appreciated the fact that the festival didn’t oversell the space to the point of inducing claustrophobia.

But interestingly, they did sell out despite the “last-minute” cancellation of the two second-night headliners, Coffins and Noothgrush (Coffins apparently had some kind of visa problem, undoubtedly because of some kind of threat to Our National Security). In fact, one of our group had the distinction of buying the next-to-last ticket for the second night. Although the festival gave refunds to people who changed their minds about coming after the Coffins/Noothgrush cancellations, the demand was strong enough that they were able to turn right around and sell all of those refunded tickets — which was a nice thing to see and kept Panic Room from becoming a real panic room for the folks who put this together.

The audience was also very laid-back, and by that I mean that although people enjoyed themselves (and got some vigorous pits going), I didn’t see a single display of asshole disease or drunken idiocy either night. One of my favorite stories from the weekend was also a sign of how good the vibe was:

At some point on Saturday night I went outside for a smoke right about the time the head security guy was saying good-by to a couple of tooled-up, scary looking cops clad in black from head to toe. I’d had a few friendly conversations with the security dude previously, and so I stopped and asked him what was going on. He smiled and said, “Oh, nothing. I know those guys. They said they’d spent the night checking on hip-hop clubs and swung by here just to take break and relax because they knew it would be chill”. 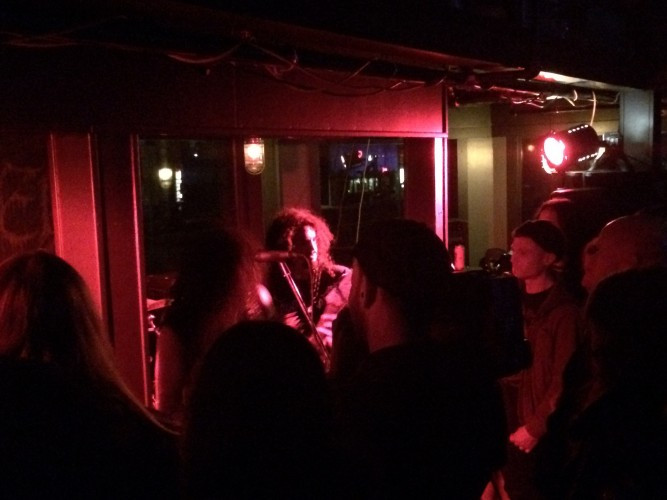 When I reviewed the most recent EP by San Diego’s Ascended Dead in the spring of last year, here’s how I tried to describe the music:

“Imagine you’re behind the wheel of a steroid-fueled muscle car going too fast through a hairpin curve on a mountain highway — and your brakes suffer catastrophic failure. You blast through the guard rail, briefly experience the thrill of flight, and then proceed to barrel down the mountain listening to your ride violently shake itself apart, bolt by bolt, while some inhuman horror in the back seat roars at you to stop fucking with the brakes and give it more gas.”

Seeing them live in the smaller of the two panic rooms (where they basically set up on the floor in a cozy alcove), I had similar thoughts. It was a ferocious and electrifying blackened death thrill ride. And holy shit, the band’s drummer was unbelievably fast and powerful. Equally stunning, by the end of it he was still breathing through his nose, as if he’d just been reading for a half hour on a comfy sofa instead of impersonating a rocket.

UPDATE: A good video of Ascended Dead’s performance has now surfaced, and now you can see and hear for yourself what I was trying to describe (below). 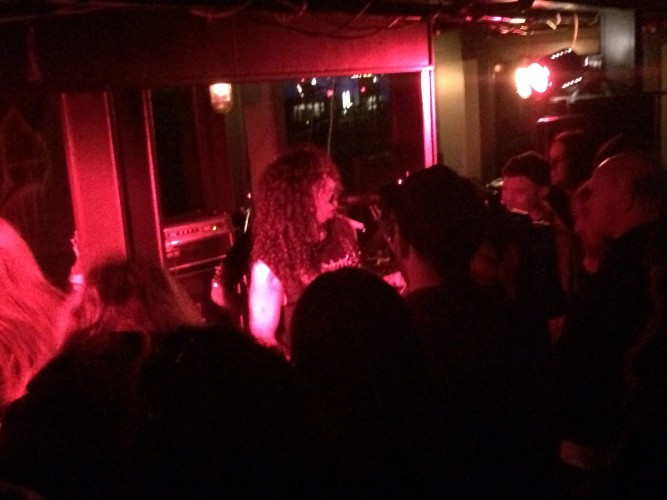 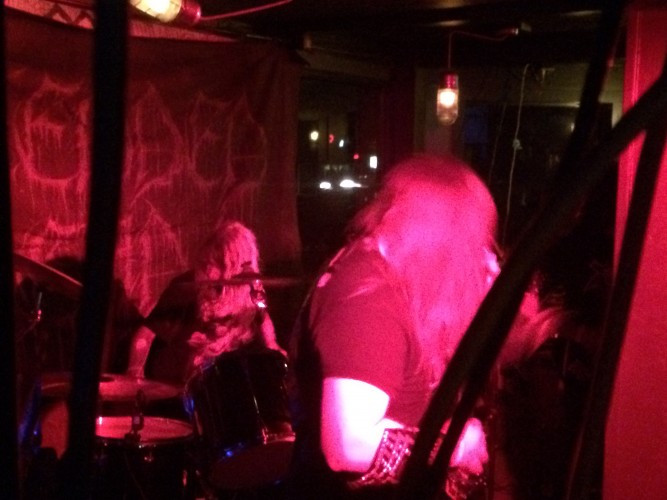 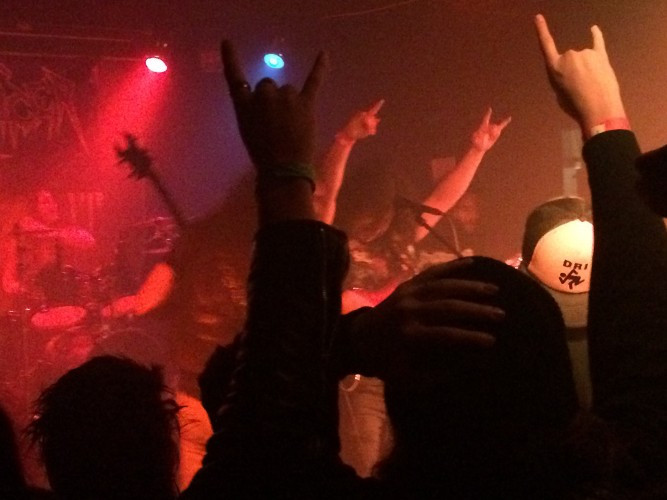 This L.A. band (making their first Portland appearance after 10 years in the trenches) were completely new to me — and I was completely sold on them. They put on a fantastic show, both in sound and in sight, delivering one full-throttled thrash blast after another, all of the songs hellish high-voltage onslaughts and all of them highly infectious. The crowd went nuts over them.

On stage, the guys were just as pumped up as the crowd (which kept the pit stirred into a froth all the way through the set). They really seemed to be having a hell of a time, and their own excitement and energy were contagious. Watching the three front guys doing synchronized tomahawk chops with their axes while clouded in smoke and lit red from above was especially awesome. 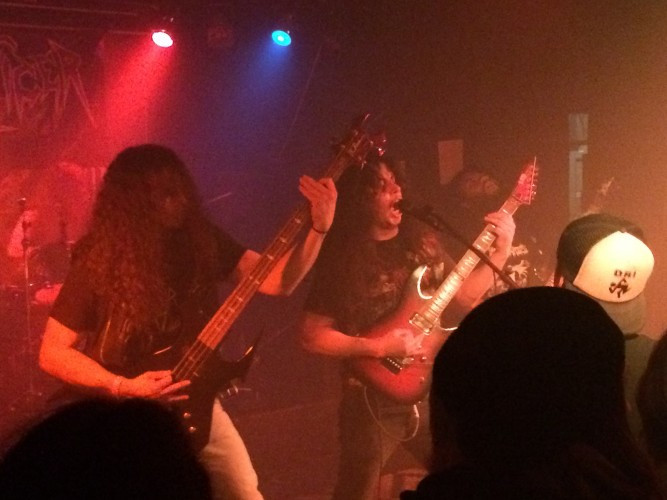 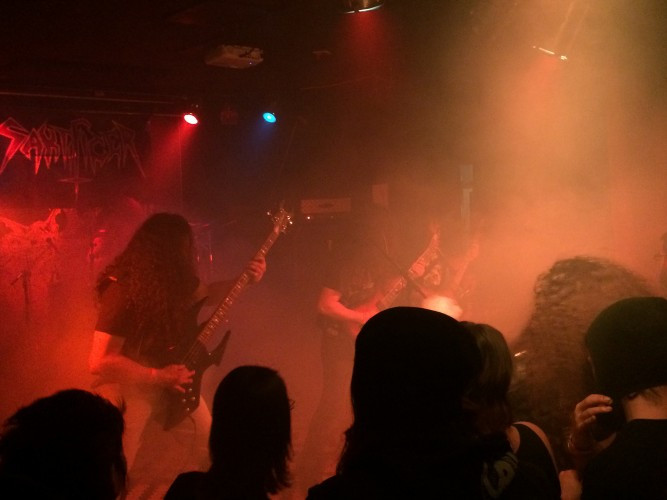 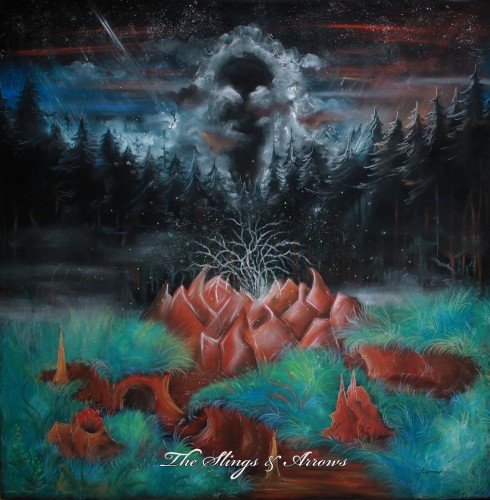 After Sakrificer’s set I needed to catch my breath and dry out, so I headed for the bar with my comrades. At some point during our conversation I realized that the entrancingly beautiful keyboard music I was hearing wasn’t pre-recorded. Over in that small second-stage area near the bar was a guy playing a mix of ambient and classical compositions on an electronic keyboard. It was completely unexpected, and completely welcome. I felt peaceful and rejuvenated — and kind of hypnotized — be the time he finished.

The artist’s name is Nick Superchi. I failed to get a photo of him, so what I’ve used above is the cover of his 2015 album, The Slings & Arrows. 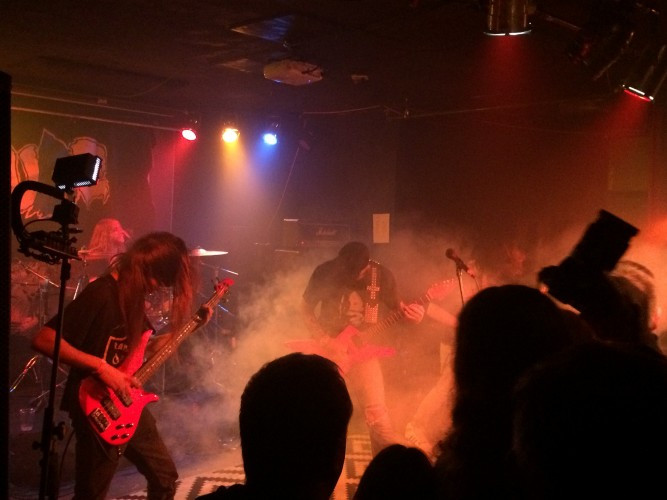 Like Sakrificer, Rude (hailing from the Bay Area) were a new discovery for me. I had heard that they were a late addition to the festival, helping fill the gap left by the withdrawal of Coffins and Noothgrush, but I knew nothing about their music before stumbling into the main stage room just as they cut loose. Turns out, they kick massive buttloads of ass with a heavy-grooved, high-energy approach to death metal that’s lit up with some top-shelf guitar virtuosity.

Their debut album, Soul Recall, was released by F.D.A. Rekotz in 2014, and I had a copy in my hands about five minutes after their set ended. Like most other people, I was disappointed that Coffins and Noothgrush couldn’t be at this fest, but I’m also very happy that their absence led to the discovery of Rude. 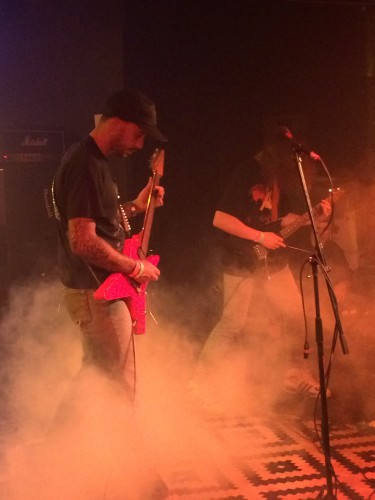 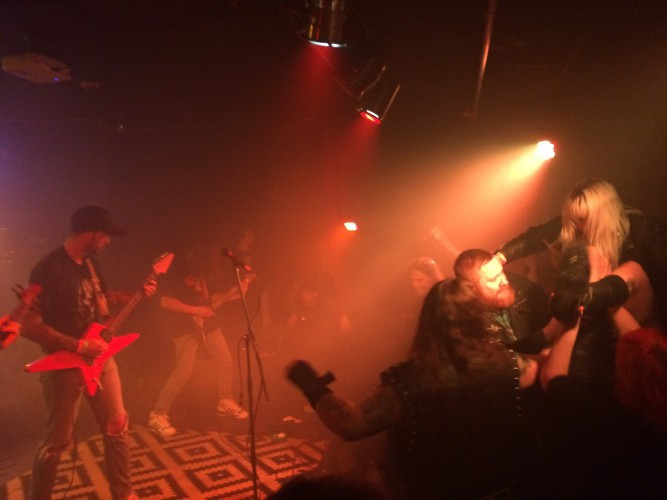 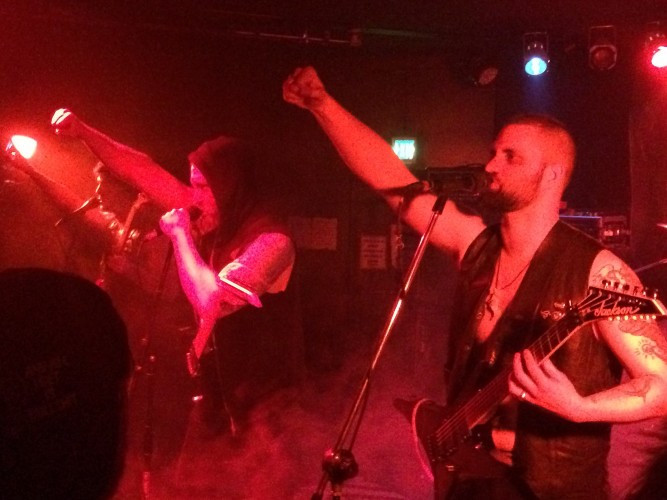 Apart from the dashed hopes of seeing Coffins and Noothgrush again, the chance to see Mitochondrion one more time was probably the festival’s biggest attraction to me. And once again, they were overpowering, vividly conjuring images of tangible horror and otherworldly dread through their music while repeatedly shooting lightening bolts straight into your spine.

Mitochondrion combine an atmosphere of utter darkness and a sensation of ruthless and unbridled chaos, but do so with galvanizing riffs and more instrumental complexity than you’ll find in most blackened death metal bands who try to march in their footsteps. And on stage the savagery of the music is enhanced by their grim visages — wild-eyed, smeared with soot, and ferociously serious — and by the interplay of three different monstrous vocalists. When Shawn Hache roared in the introduction to one song, “YOUR TRIALS HAVE JUST BEGUN”, I had the heart-sinking conviction that he was about to make good on the forecast. 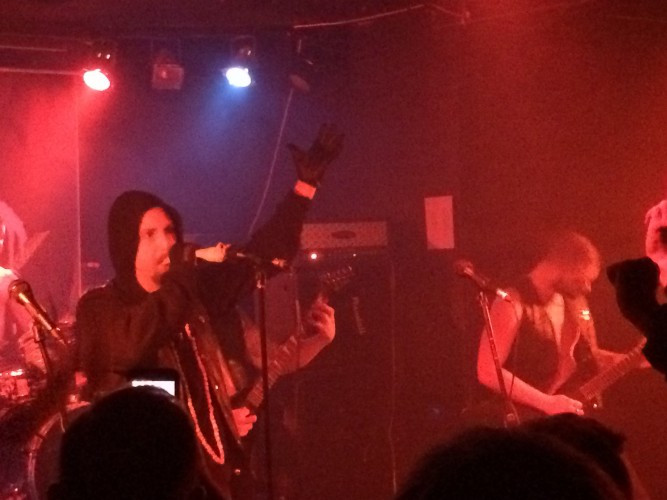 At the end, the band played a new song, which is as pitch black and riveting as anything they’ve ever done. For that song, they brought on stage a mysterious guest, a bearded, hooded man who began and finished the song by playing a bone flute and intoning chants in something very close to Tibetan throat singing. It was chilling, and a memorable way to finish a hell of a good weekend. 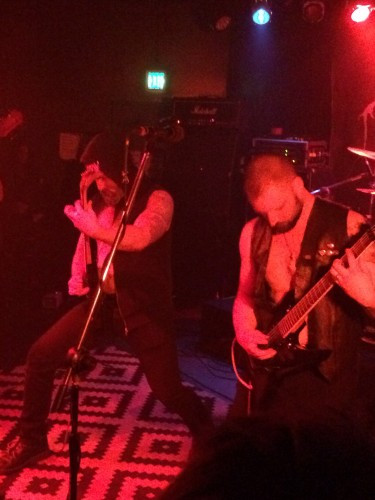 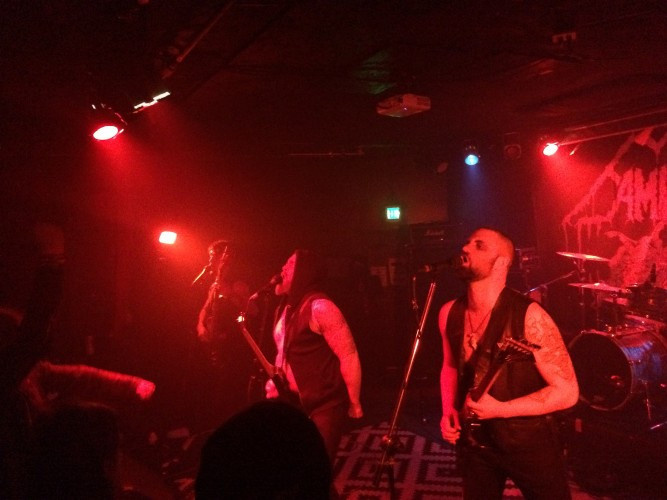 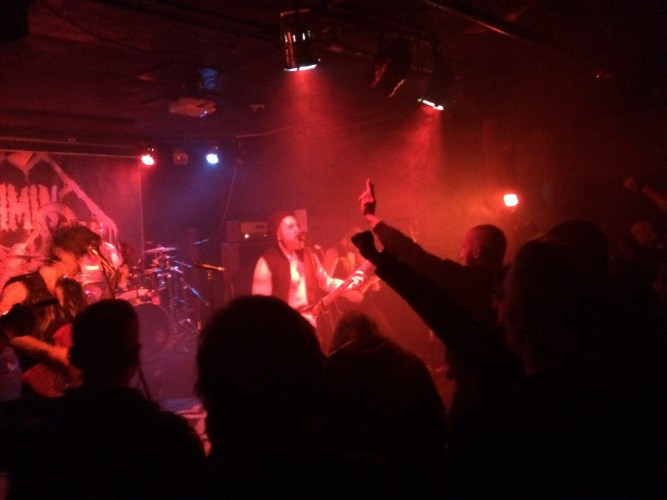 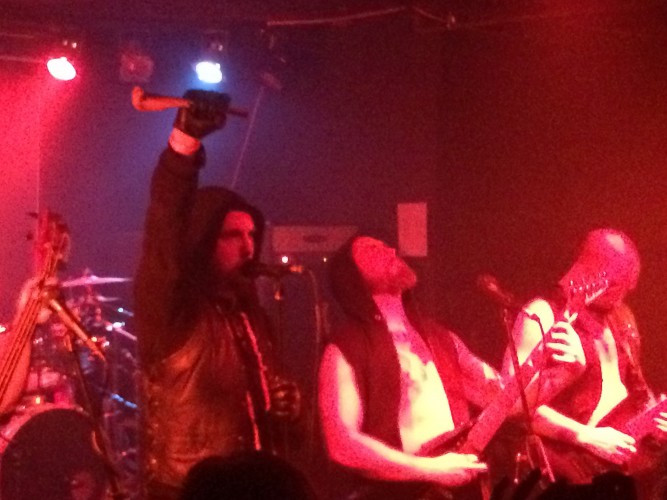 As you can tell, I had a blast at this festival despite the fact that I missed out on a lot of performances. One of the most historic was the appearance of NME vocalist Brian Llapitan performing the music of NME under the name of “Unholy Death” (named for the band’s 1986 debut album) with members of Cemetery Lust and Nekro Drunks.

Although I’ve been in Seattle for 20 years now, I’ve only recently learned about NME, though they’re obviously held in high regard by lots of people up here, including the organizers of Famine Fest. I thought I would finish this post by providing a stream of a February 17, 2016, interview that Brian Llapitan did with Japan Nick about NME, Unholy Death, Famine Fest, and more: