(We present Wil Cifer’s review of the new album by Howls of Ebb.)

Finally there is some motion in the ocean, as the albums I’ve been looking forward to going into 2016 have begun to creep into my inbox. This project out of San Francisco brings a sense of adventure back to death metal. There is little in the way of rehashing what Incantation and Morbid Angel have already done. No time is wasted digging into the meat of the metal on this one. The trippy grooves and atmosphere are still intact, as the double-bass hammers beneath the rubbery bass lines. The aggression is not conveyed in the manner you expect from death metal. Their guitar tones are not saturated in distortion; they give an organic quality to the chaos bubbling within these songs. 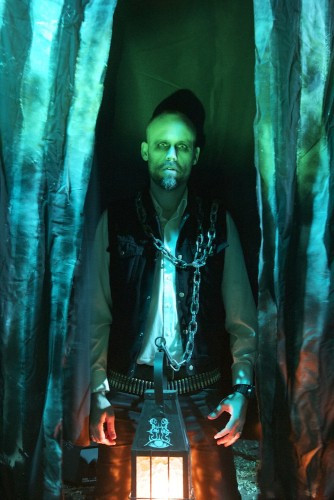 For me darkness is an essential element of heaviness, so this makes “Maat Mons’ Fume” really stand out. At times they take on more of a proggy sludge feel than death metal. The guitar solos come in the form of explosive spasms. This sometimes leads to the kind of insanity that is not out of place on a Sleepytime Gorilla Museum record. On this album it is executed with a more deadly seriousness.

The experimentation on “7 Ascetic Cinders…” takes the song into a more surreal abstraction. One of the band’s strengths is their ability to stir the chaos to a boil without forsaking song writing. At times this creates an almost free-form jazz vibe, if said jazz were being played in a psilocybin-induced trip to hell.

Some songs find the dry rasp of the vocals becoming more intelligible. “Subliminal Lock — A Precursor To Vengeance” is one such song, colored with a similar shade of sinister as “Where the Slime Live.”

They linger on atmospheric noise before bringing this nightmare to an end with “The Apocryphalic Wick”. The coarse chant finds all the other instruments falling in around it before gaining momentum. This song works off of a much simpler premise than the rest of the album, alternating between only two sections.

Overall this album brings to life everything you could want from the band. The bass playing is some of best in today’s current crop of death metal. The experimentation is tempered with aggression, without the burden of monochrome brutality. The playing is dialed up past your expectations of this band.

If you are the kind of person who sits around on Reddit debating what kind of metal sounds best when you are dropping acid, then I would like to offer this album up for your consideration. The surreal elements feel very natural and flow in a way that would compliment the journeys of most metal-minded psychonauts.

Howls of Ebb refuse to fit neatly into any of the death metal sub-genres and continue to cement their own weird and wonderful sound. I, Voidhanger Records plans to release this beast on April 15th.

Cursus Impasse: The Pendlomic Vows will be released by I, Voidhanger in a CD edition on April 15. Nuclear War Now! Productions will follow that with a vinyl edition on May 15, and Caligari Records will release the album on cassette tape.

4 Responses to “HOWLS OF EBB: “CURSUS IMPASSE: THE PENDLOMIC VOWS””