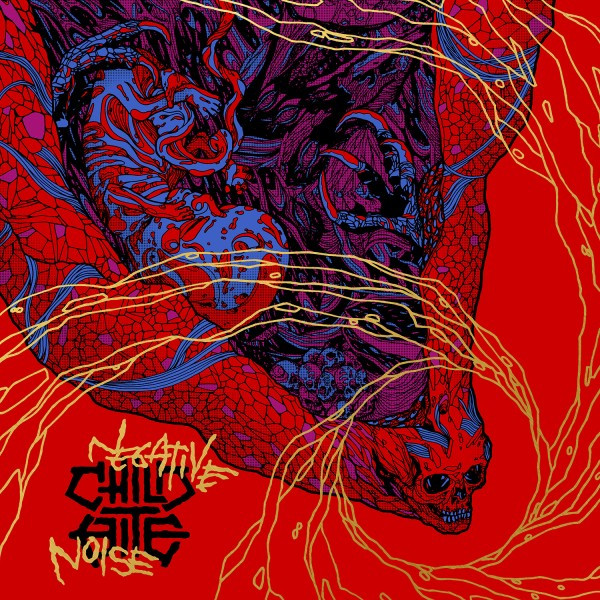 Man, I still can’t get enough of that album cover up there. So colorful… so hallucinatory… something like a womb with a skull at the business end and claws cradling the fetus. How can you not want to gird your loins and dive into the music to see what strange sensations lie in wait? I sure wanted to. And I’m sure glad I did.

The artwork was created by Shawn Knight, who also contributes his vocal talents to Child Bite, the veteran Detroit-area band whose line-up also includes Sean Clancy (bass), Brandon Sczomak (guitar), and Jeff Kraus (drums). The name of the album is Negative Noise, and yes indeed, it’s a strange and thoroughly invigorating trip — from which we have the pleasure of delivering the premiere of a song called “Video Blood“. 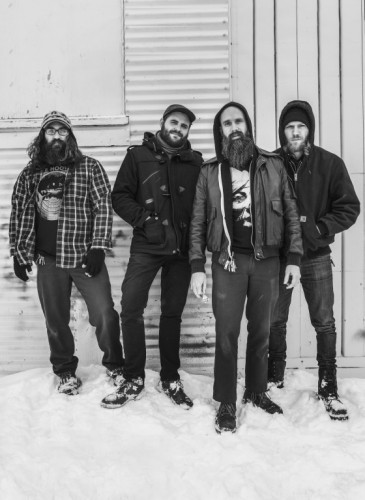 Our friend Allen Griffin reviewed Negative Noise for us earlier this week, praising (among other things) its “unpretentious but top-notch musicianship”, its “sense of sonic experimentalism”, and its “dizzying number of rhythmic left-turns”, summing it up as an album that “possesses a brilliance and individuality all its own and is a refreshing breath of fetid air”.

All those qualities are on display in “Video Blood”. Rippling guitar melody goes hand-in-hand with skittering noises; beefy bass notes partner with booming drum beats; dissonant arpeggios writhe and shriek; and Knight screams and declaims like a street-corner preacher. The music kicks your reptile brain into gear, provoking the desire to stomp and spasm, while it tears up your higher faculties and scatters them to the wind. It’s an amalgam of punk, noise rock, and hallucinogens that will get its claws in you, like the ones bearing in on that fetus on the album cover. Very cool.

Negative Noise will be released by Housecore Records on April 1st, 2016. Below, we’ve included not only “Video Blood” but also two more tracks from the album that premiered previously.