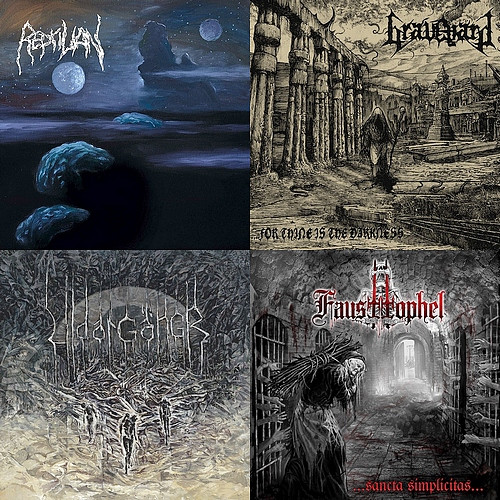 Still, I hope the date rubs off, and that you have just a little bit of bad luck today. Not much, though. We wouldn’t want that. 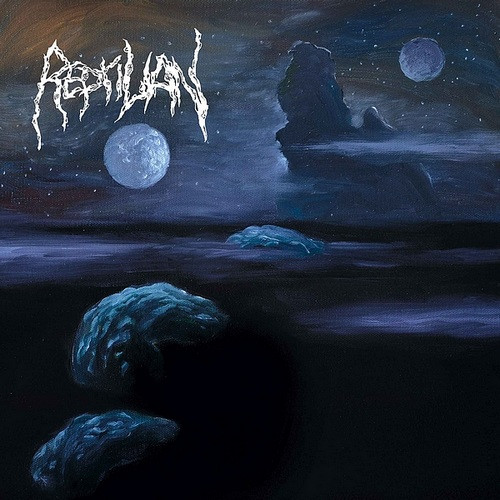 Iscariah and his Edged Circle are again looking to spread morbid youthful madness from his godforsaken rural region of habitation.

Three out of four reptiles seem to be located in the frantic thrash outfit Inculter (featured here), unless I’m way off. The first release from both bands was a split between them in 2013.

I’m pretty sure there’s even some line-up overlaps with Sepulcher (covered there). The swamp gators perform a more controlled form of the frantic approach to the Autopsy-style than what Sepulcher went with.

The band blends nicely into the ranks of good Norwegian bands with a penchant for good old frothing rabid death metal. It reeks of kinship to Obliteration and Execration, and the stench of tainted meat and coagulated blood fills the room. The press letter also mentions Norwegian Cadaver, a band I had completely forgotten about, but yeah, the last album, 2004’s Necrosis certainly had style-wise similarities, and there’s no way ’round naming Diskord. After all, they are the Reptilian Ancestry.

On the quartet’s debut one can easily pick up a sensation of four-armed maniacs with swamp fever running ’round the swamps in a state of complete trance-like delirium. The guitars are effective tools for spreading black voodoo magic. The hypnotic effect of hypnotizing riffs echoes through the jungle. The vocals, a victim of the black voodoo, are completely obsessed, whilst malaria and lack of knowledge of what kind of mushrooms to stay the fuck away from have driven the poor hysterical souls utterly insane.

Primitive drumming on hollow tree trunks and abandoned tortoiseshells is still the most effective jungle telegraph. Rhythms and tempo changes are stylishly and confidently controlled, whether consisting of bizarre strokes or breathless sprints with mud splashing all over the place. The bass, with dried mud on slack strings, could have been a bit more noticeable in the mix, for it fits superbly into this strange landscape.

As the cover art and as the title partly suggests, there’s also a few otherworldly vibes hovering over Reptilian’s ethereal requiem. I sort of miss some riffs and sequences with a more “catchy” effect, which could have secured their grip like screws into my Teflon-treated memory-area, but Perennial Void Traverse is a very good album anyway, performed with youthful zeal.

Hear “Swamp” and “Phantasm” here, or visit Transcending Obscurity for a full stream. 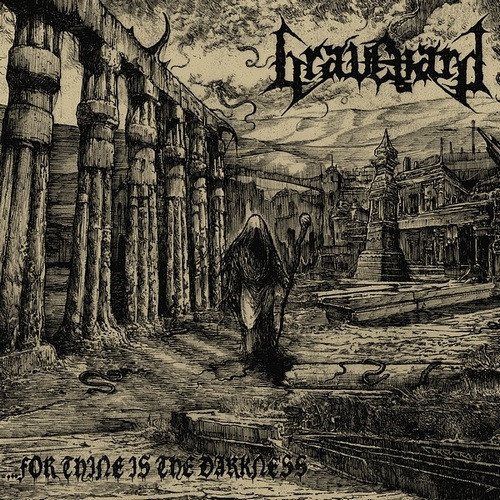 GRAVEYARD – …FOR THINE IS THE DARKNESS

To say that Graveyard is Islander-approved is probably a safe bet. The band has a history of appearences on NCS.

The Spaniards, or perhaps we should address the Barcelona-based band as Catalans(?), have been around since 2007 and have gradually piled up a solid stack of splits on their path. The band’s first album, One With the Dead from 2009, was a proper dose of death metal. The second album, The Sea Grave from 2013, unfortunately slipped beneath my radar. With their third full-length album, the guys show some hefty progression, behind a somewhat more interesting cover than the usual morbid black and white drawings.

…For Thine is the Darkness is located on a completely different level than the debut. Where that one consisted of good, yet quite ordinary, death metal, the new album showcases a band with music-artistic ambitions far beyond the minimum requirement of simplistic, straightforward death metal.

The album consists of 17 tracks, but still lasts no more than 43 minutes. Besides intro and outro, the band have included short interludes titled “Threshold I” to “Threshold VII” between each track. These include snippets of ambient, oriental, or guitar-driven variety. Whether the intention is to reset the listener, much like coffee beans act as neutralizers for the smell, and thereby “restore the mental white balance”, or whether it is to separate the songs apart, or to add atmosphere, each one has to interpret on their own.

This death metal has strong variation, and some unusual approaches. The foundation is a good, traditional blend of punch and speed with unholy moods, where the references and inspirations are numerous. This album still stands out slightly.

Graveyard never quite let go of the moods. There’s always some occult and obscure undertones lurking in the shadows. When the music has surrounded the listener, the secret alchemical fraternity comes out of the shadows from every corner, take off their cloaks, and reveal their true, scarred faces. Their eyes glowing red and swirling hot winds come sweeping as telepathic spells of witchcraft and black magic.

The album’s eight tracks have ass-kicking drift and constant changes in restless progression. Swirling melodies in the style of Amorphis, or evocative despondency a la Type O Negative, appear and disappear as psychedelic mirages. My favourite song becomes “The Mighty Colums of Irem”, where diabolical moods fill the air as steam from geysers. Wonderful guitar work and hard-hitting dark sound add the finishing touch and ink the deal with the devil in blood.

There are albums that go the extra mile in pursuit of that little extra that makes the music truly exciting and special. …For Thine is the Darkness is shrouded in such a mysterious smoke of artistic integrity.

I’m admittedly not going to claim that this album is an outstanding compositional work. At its most ordinary, it is “just” tough, while at its very best, it’s very well-executed and profoundly killer. Every death-eater with self-respect should definitely check out this album.

…For Thine is the Darkness was released by War Anthem Records on April 29th.

VIDARGÄNGR – A WORLD THAT HAS TO BE OPPOSED

Vidargängr hails from Germany. Specifically, from Leipzig, widely notorious for Mayhem‘s first live-album. The Germans then also play traditional black metal in good (or evil) old tnbm spirit themselves. The band was formed in 2010 and debuted on their own three years ago.

Precisely the very fact that they play traditional black metal to such a degree may lead to a somewhat split opinion in the reception of the album. Some believe the genre’s original form has outlived its purpose, and I shall of course admit that A World That Has To Be Opposed scores low on originality. There are still plenty of those who believe pure, unabated, vicious and aggressive misanthropy never loses its ability to spread the true message of nihilistic distrust, satanic disgust, and antagonistic opposition to society’s Christian rhetoric.

Humans have a complex mindset that is neither one-dimensional nor black and white. Personally I lean more towards a penchant for good old heretical blasphemy and arrogant, stand-tall, sacrilegious depravity. Yet I feel a hint of ambivalence, as I have an even bigger respect for fresh and divergent innovation with depth and substance.

Vidargängr‘s strength is that they deliver as much gunpowder as there is room for within this orthodox framework. The band delivers nearly 40 minutes off-pitch black metal with punch, anger, and spiteful, malignant mood. The guys have written great songs that are performed with fervour and conviction. The music may not be on par with the very best of what the genre has to offer, of course, but this is still solid. The sound is good and volume-friendly despite mediocre dynamics. The worst necro(man)tics might possibly choke on the dark, distinctive bass, but that’s a chance you have to take.

Vidargängr might not push any boundaries, but the black fire burns fierce and unyielding. If you consider the infernal flame of traditional black metal as the eternal and immortal truth, the culmination of musical contempt, I doubt that you will be disappointed. (This sounded both pompous and pretentious, but fuck it, shut your hole and worship Satan.)

A World That Has To Be Opposed was released by War Anthem Records on April 29th. 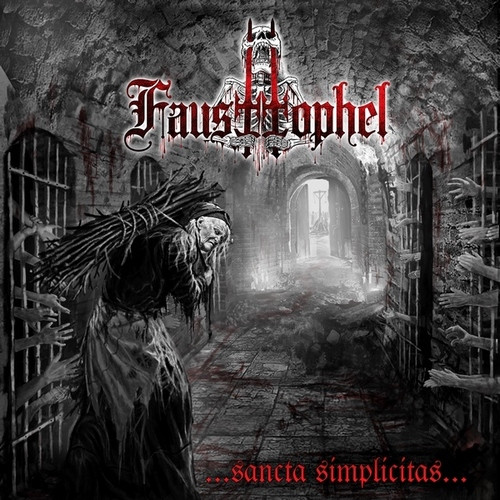 The melodic black metal band Fausttophel from Ukraine wasn’t born with a silver spoon up the excretory opening at the end of the alimentary canal. The band was started in the late ’90s, but was soon forced into a hiatus due to the very unfortunate event of fatality within the group. In 2009, ten years after its inception, the band was ready for a new start. In 2013, the debut Thirst Oblivion was finally released. The band, emerging as a quintet on Sancta Simplicitas, are now launching this sophomore album worldwide after it’s been available in their home country for about a month.

The band plays a vital melodic fusion of black metal and death metal, spiced with piano, poetry, and orchestral elements. The band is partly inspired by the Ukrainian-Russian writer and dramatist Nikolai Gogol. They have borrowed some lyrical stanzas from Russia’s poetic silver era of the late 1800s and a few decades into the 1900s, a time that followed almost a century after the golden era. Among others, declarations with melodic pronunciation are being used, in a spoken form of singing known as melodeclamation.

The music still builds on a well-known recipe, but the influence of external inspirations both creates individuality and musical substance. The intro opens with Russian recital, while a music box treat us to mournful melody, and the sounds of horse and carriage in hasty gallop give the feeling of flight. The music provides a sense of a concept album in several places, without that being the case, besides the literary leitmotif.

The lyrics are printed in English in the booklet, in addition to the original bilingual Russian/Ukrainian used in the music, apart from the closing “Black Tears”, a cover of Edge of Sanity. It can be revealed that among texts dealing with existential questions, suffering, philosophy, and so on, we also find deeply atheistic thoughts regarding religious criticism, formulated in a bit more subtle and civilized fashion than what black metal mongers have a habit of doing, yet still with rigorous rhetoric.

The music is very varied. Melodious and melody-losing sequences mingle naturally. Calm and raging parts rub shoulders effortlessly. Hard, black, and deadly metal, acoustic parts, black vocals and growls, piano, touches of female vocals, guitar solos, velvety violin, barbed-wire guitars, grand piano pieces, and backing vocals, are all ingredients in a 50-minute long refined work with strong melodies and very elaborate structures. The band knows not to overdo the use of instruments, but weaves them in where they are considered appropriate. In song number five, “Sick Earth” in English, we can for example find about 20 seconds with accordion and a short sequence of something that sounds like a harmonium (pump organ).

An example of just how exceptional Fausttophel can appear, without tipping over into oddity, is the last self-composed song, “The Whirl Ends Where it Began”, exceeding seven minutes. Trickling streams, crows, and other forest sounds appear and re-appear, but the concert grand piano and classic-operatic vocals pose the key elements throughout more than five minutes before strings and waves of rolling sea surface.

Only in the final minute, drums appear, building momentum via snare drums before blasting delightfully through a piece of beautiful melody that concludes with thunderbolts. An outstanding ending to an otherwise non-metallic song. Finally, the album truly ends on the aforementioned “Black Tears”, almost more reminiscent of Amorphis than Edge of Sanity, where the last 40 seconds are dyed as blood-red as the sunset with wonderful Hammond organ.

Fausttophel have with Sancta Simplicitas accomplished an exciting and good album, packed with diversity and memorable features.

Sancta Simplicitas was released by Another Side Records on May 6th.