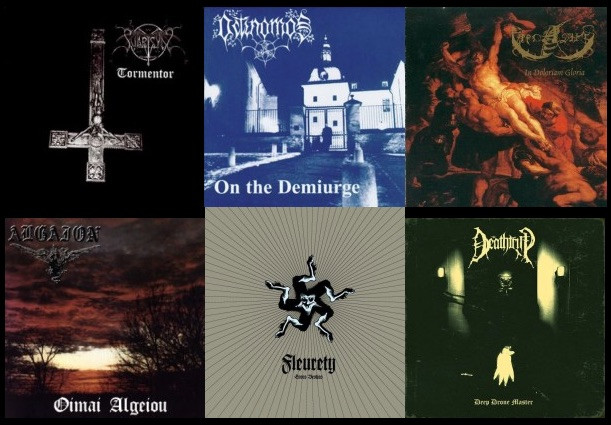 (We welcome back Neill Jameson (Krieg) with the first installment of a multi-part post devoted to under-the-radar black metal releases worthy of greater attention.)

While it seems a lot of what’s going around in black metal these days is more driven by aesthetics and shock value than ever, it still has a certain potency that other genres within metal don’t seem to be able to match. That being said, I can’t think of a lot of current bands that I obsessively listen to the way I would when I was younger and potentially more full of shit than I am now at this ripe old age.

Elderly bitching aside, I’ve been spending a lot of time thinking about records and bands that went somewhat under the radar at the time of release and sit in relative obscurity now, mostly because people have shitty taste (myself included), so I figured I’d use a column or two and shed some light on some records in the genre I’ve never been able to walk away from for whatever reason, the sort of releases that if I ever came into an excess of money I’d love to release on vinyl so that they would sit in my office unsold while people download it along with some weird virus that broadcasts Russian incest porn to their e-mail contacts. Here’s a few to start with:

A lot of people when asked about black metal from Sweden will instantly say “Watain” as a small stream drips out of their mouth as they stare vacantly off into the distance, dreaming of one day gathering with others who also have their backpatch so they can be like the Kiss Army. But for me Svartsyn has defined Swedish black metal since their first record to the current day. They remain the only band who has ever re-recorded an album (The True Legend) and done it justice. But this EP, gifted to me by my Canadian brother Bernie in Texas in 1999, stands apart from all of it. It’s harsh, raw, urgent and somehow more powerful than nearly anything that came out of Europe that year. They said more with a two-song 7 inch than most bands say in ten years.

Sweden again. There’s two versions of this, a self-titled and On the Demiurge, and I’m not going to Google as to why because I’m an irresponsible hack. One of several projects of Fredrik Söderlund who, in the mid ’90s, seriously could do no wrong. All of the bands shared a similar sound during this period but that was a plus. This was strange and alienating black metal that honestly sounds like nothing else from that time. I couldn’t get into the records after this because of a shift in sound, but the internet tells me they’re active again. The internet also tells me how I can delay ejaculation and become rich, so I don’t know how much I trust it, I’ve been hurt before.

Again, here’s something Fredik Söderlund was involved with. When I was a lot younger I was doing a terrible zine and submitted it to Cold Meat Industries and got this, the first release on their black metal sub-label, in return. This has always been a benchmark to me on how to do keyboards and drum machines in black metal. It’s difficult to describe that sort of thing without using clichés like “majestic”, but both Parnassus records really have an otherworldly feel, and twenty-one years later I’m still as hooked as the day I got it in the mail.

Final record involving Söderlund, who supplied drum programming, for this list. I haven’t kept up with this band in recent years, which is probably a poor decision, but this out of everything of theirs I’ve owned will always be my favorite. Owing more to the Greek sound than the Swedish, with intense and (at the time especially) crazed vocals, I hadn’t heard a lot like this, especially not a band with such an emphasis on memorable passages. Another one that didn’t get sucked into the hype of the ’90s that probably should have.

One of the forward spears in the oddity movement black metal experienced in the mid-late 1990s, I hadn’t really paid much attention to Norway’s Fleurety after their initial releases, probably because I had my head up my ass with the stricter dogmatic approach to black metal and shunned anything outside of it, which is sadly ironic considering I’ve spent most of my adult years seeking it out. Anyway, a few years back I came across a clip of this somewhere and couldn’t believe what I was hearing. They had managed to strip back their approach to black metal to its most primal elements while taking it out of the mountains and into the filthy streets. This EP in particular is probably the best thing to come out of Norway in the last ten years. It still maintains a strange atmosphere, all while somehow being oddly comforting to these ears. A perfect recording.

The newest entry on this list, The Deathtrip is an Aldrahn project (who you should know from Dødheimsgard amongst others). Two demos that were primitive and degenerate as hell were enough to keep my interest, but the realization of the building blocks they represented which came together on this release is startling and welcome. Aldrahn has always had one of the greatest voices in black metal and it has felt like far too long since it’s been heard. Hopefully this is a project that will continue and grow.

This is just the beginning. I’ll have another batch sometime in the future. Until then…