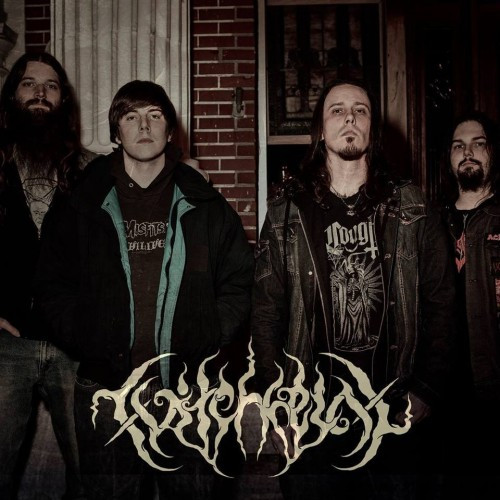 (Comrade Aleks presents this interview of Sean Deth from Ohio’s Witchhelm, whose new album Dead Nights of the Moon Fear will be released on January 1, 2017 — or possibly sooner.)

Witchhelm is the gloomy and pagan doom outfit started by Sean Deth, a multi-instrumentalist who previously played in a few extreme metal bands. Sean wrote the first tunes for the project in 2012, but officially it was shown to the world in 2015. He had been in a lot of different metal bands before that, so all of his influences took form in this twisted sinister doom metal.

Two albums, one solid EP Jötunn, and a pair of singles in just two years – not bad, right? But Sean and his companions have already finished their third full-length record! Let’s go through Witchhelm’s story with Sean and find out about the rites of Conjuring and Invocations through Dead Nights of the Moon Fear!! 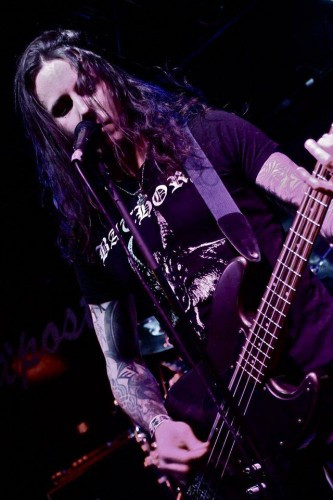 Well, Sean, I have a pretty straightforward question – why did you name the band Witchhelm?

In 2012 I wrote all of Conjuring without a band name, I have been in a lot of black metal and death metal bands but also I was always into the doom genre since the ’90s more than any. I was listening to bands such as Sleep, Cathedral, Buzz-oven, Eyehategod, Melvins, and loved that style of music more than any, so I figured if I write it, maybe I’ll get people together to play it later on, which I did. I had a list of names I went through and Witchhelm stood out. Given what the songs talk about, it’s supposed to have like a story-book name, so that’s how I came up with it.

Officially the band was formed in 2015; how did you manage to do two full-length albums and one solid EP since then?

The project was started in 2012 and Conjuring was written and recorded in 2012, but it had no official release ’til early 2015. I had the album up on YouTube and ReverbNation around 2013 but wasn’t getting any views, so I took it down. Then a few years later I figured that I would like to try again, and then channels such as Stoned Meadow of Doom, 666MrDoom, and MrStonebeliever, and webzines such as Doomed and Stoned helped to get our name out, along with some friends and fans from all over the world (I’d like to shout out to Robert Walfridsson).

Around that time I recorded Invocations. So this past January I released our EP Jötunn which was recorded last October. I got my friend Justin to start playing guitar and my dude Billy who plays guitar in Merciless Reign to play drums mid-2015 so we could start playing live. Later on that same year I got my past bandmate Brent to play rhythm guitar, so I guess this is a pretty full lineup as of now.

So do I get you right that you’re the only author of all of Witchhelm’s material? Or do the other guys contribute their parts too?

The others contribute also, they do some minor things differently live but nothing to take away from the songs for the older stuff, kind of keeps them fresh. They will be on the new album, they just have to overlay the guitar tracks that I already put down. We also have been writing a song here and there as a full band which we plan to release and record as a full band in the future; we’re just trying to release at least one album a year for the time being.

The band has changed through these two years of its existence, and Witchhelm songs are always multilayered. For example your newest single “Lifted” is an absolutely psychedelic thing as big works have both traditional doom elements and brutal vocals. How did you form this vision of Witchhelm?

“Lifted” is intended for a split 7’’ with Bretus if it ever gets pressed, I’m still waiting on the word about that. We try some different stuff here and there, but try to keep our main sound, which I think we do. Some songs are more psychedelic, some more sludgey, we still keep it witchhelmy. 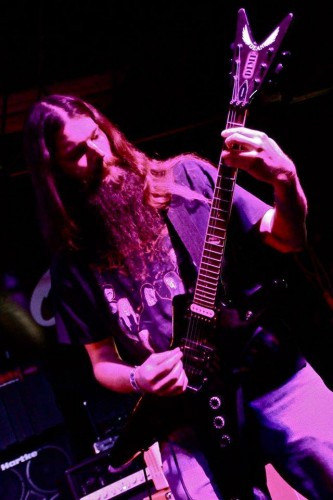 What kind of changes do you plan to put in the next record?

The next album is basically done. I just need to bring the guitar players in to overlay my guitar work on the album. This is actually the first time they will be on a Witchhelm album. Every album gets heavier and heavier. This one has intense fuzz sludge, it’s melodic in parts, and still dark but also it has that twang to it. It’s probably the best stuff I’ve ever written. Teasers will be up here and there until the release on January 1st, 2017.

Can you share more details about this next record? How many songs do you already have for it? Will it have any general lyrical idea?

Well, the new album is named Dead Nights and the Moon Fear. The title was come up with by a Witchhelm fan’s daughter. A few months back I did a poll for album titles and song titles for the upcoming album to give the fans some input in the band as long as it stayed within our style. There will be three songs that were named by some fans; I just based the lyrical content off the titles. It was cool to do some more research and studying in the dark aspects of the titles. A few of the other songs are based off Nordic and occult beliefs, also some about going on a TRIP and smoking. This album of 9 tracks will be the heaviest we’ve done yet. 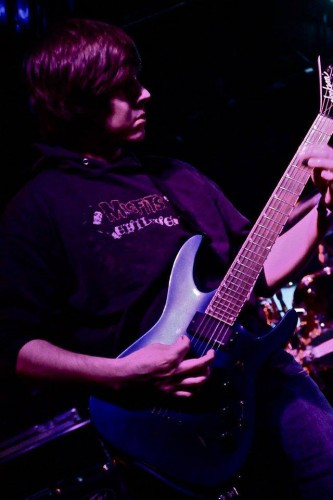 One of the features of Invocation (and probably Conjuring as well) is the use of groovy, horror-inspiring samples and effects that you use to emphasize the tracks’ atmosphere. How do you work over it? Which role will it play in the next album?

There will be some Classic organ here and there and some atmosphere like we’ve done on the past albums, but not overdone. The atmosphere is the last thing I put into the songs before mastering. For this album it’s on already, I just need the guitar players to exchange theirs for mine, mine are just references for now.

What is the technical side of working with Witchhelm? How do your recording sessions usually go?

After this album it will be all of us going in to do scratch tracks with drums, then everything else. This album is a little different by me having the guitar players come in last and using my guitar tracks as a scratch track; kind of weird but cool to always try new things.

You use a lot of images from heathen beliefs and mythology — how would you sum up the band’s lyrical or ideological concept? Do you use, for example, some components of Native American beliefs in your lyrics?

I’ve always read folklore from Celtic and Nordic traditions, but I am more attached to the Nordic beliefs, and I am also very fascinated by Native American mythologies. I try to paint a picture of storytelling musically. I do write about the occult and some darker sides of witchcraft. Much of what is of interest I read and study, and it becomes inspiration. 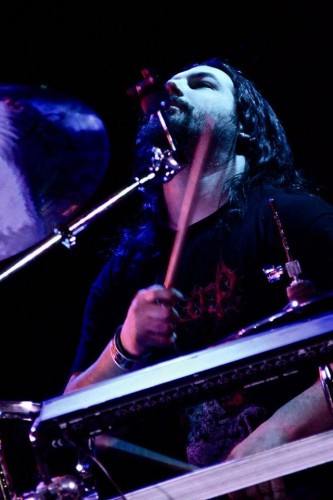 How much of your own self is in the lyrics? Do you believe in the things you sing about?

Mostly all. I’ve liked dark story-telling ever since I was very young. I am pagan but my belief system is very wide-spread. It sounds confusing, but I’ve done a lot of soul-searching and kinda pieced together what I believe. I don’t care what others do — I’m not everyone else, and I never judge. I love reading and watching stuff on ancient hauntings, old occult documentaries, alien conspiracies, parallel universe and multi-plane dimensions, and much more. I love mythologies and I love the Icelandic sagas; the sagas kind of teach you a way of life to worship nature but to fight for what you believe in, a lot of morals. My dad has played guitar in rockabilly and classic rock bands since he was young and still does. He is an amazing guitar player, and a lot of people ask why I don’t play guitar like him. But I prefer bass and doing vocals. I love playing bass, most of my favorite musicians are bass players.

Your first release was the “Phooka” single. Does this creature of Celtic myths represent the pagan side of Witchhelm?

Yes, Phooka is the baphamet-looking creature that rides in and captures people. I could go on about the folklore. The song is still one of my favorites

You planned to do the split 7” with the Italian band Bretus. Is it still in the works?

“Lifted” is supposed to be the song by us on the 7” split. Yeah, it’s still in the works. If for some reason it falls through we will look for another band to do the split with. I’ve actually been thinking about a three-way split, that might be interesting.

Sean, you also play in at least three other, more extreme metal projects. How do you share your efforts between all of your bands? Do they intersect with each other?

Witchhelm now is my main deal. Black April is done, unfortunately. I love that band but after 3 years and one full album our time started to not work out with each other to practice, so we called it quits for now. Benighten Empire, my black metal band, is on a long hiatus, and LTWB is whenever I feel like doing it. I do fill in on bass here and there for some big bands for live shows, but a little less now since I’m trying to do a lot with Witchhelm. I may be playing bass in a black metal band from my area that’s been around but on hiatus for awhile named Nailblack; I’ve still got to see about the time thing. I work with animals on the side at a pet store. I can’t quit my day job, unfortunately, but I love working with animals.

As I see that both Conjuring and Invocations exist only in digital format, do you have plans to release them on vinyl or CD?

Conjuring is still digital. We did get someone to do tapes but have not seen any of them. Invocations and Jötunn are pressed on CD, but you can only get them through us for now. Besides that, Jötunn should be printed on vinyl; I’m not sure if the label has gotten to pressing Jötunn yet, but it should be done soon. And a company has tapes of Jötunn, though I still have no clue on where people can purchase those, unfortunately. 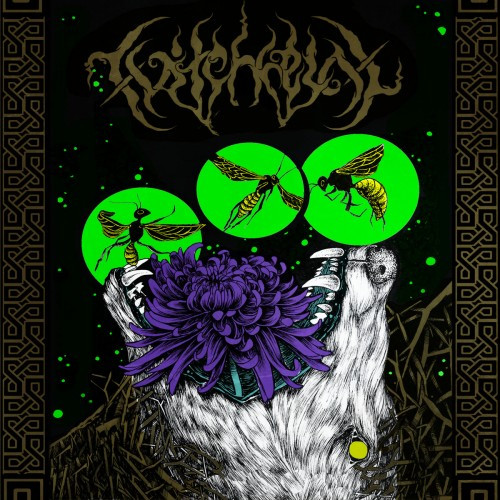 Thanks for the interview Sean! Don’t forget to let me know when you have a new Witchhelm record!

Thank you. The album will have a preorder on Bandcamp sometime around October by the latest, and more will be available after that. I’m trying to get a few companies interested in pressing and selling online for distribution.

Editor’s Note:  Pre-orders of the new Witchhelm album are available now on Bandcamp, along with four tracks for streaming and download with pre-orders. These are not the final masters of the songs, as explained in this note on the Bandcamp page:

“The Pre order will last until January 1st, band camp just has a 90 day policy so we will be renewing at 90 days before jan 1st, should not mess up your order, if not well just have to release it digital through band camp before release date, ALSO you get 4 Tracks right away from the album. Lead and rhythm guitars are also being re recorded so the tracks you are getting now are first master, 2nd master will be replaced soon so if you want both copies order now.”

One Response to “AN NCS INTERVIEW: WITCHHELM (SEAN DETH)”