In addition to revealing this additional batch of 25 bands, MDF also made one more stunning announcement (I had heard rumors of this but kept my mouth shut until officially confirmed):  THERE WILL BE NO PERFORMANCES AT EDISON LOT NEXT YEAR.

For a whole bunch of reasons, this is very disappointing news, though I have no doubt this will still be one hell of a weekend in Baltimore next May. Here’s the full statement, which also includes the latest info about ticket sales:

Only 2 venues will be used next year, Rams Head Live and Baltimore Soundstage. Not using Edison Lot may come as a bit of a surprise to some of you, but to make a long story short, the cost of production to use Edison all weekend is too much to justify using it again next year. We prefer to stay true to our roots and not seek a bunch of sponsors or raise ticket prices to help fuel the cost of continuing a 3 venue format, so downscaling to 2 venues was in our best interest. This decision will keep the cost of tickets cheaper than the last few years, but nearly the same amount of bands that you’re used to will be booked.

Once again, the Thursday show at Rams Head will feature doom/stoner/sludge bands, while Baltimore Soundstage will feature death metal.

From Friday-Sunday, Rams Head will be running all day and night instead of just late evening hours. Rams Head will feature death/black/thrash metal bands all weekend.

From Friday-Sunday, Soundstage will be running all day and night just as it has in the past. Soundstage will feature grindcore/powerviolence/hardcore/punk bands all weekend.

This venue format will allow us to keep collisions of 2 bands playing at one time to a minimum. You also only have to walk 2 minutes between the venues.

As always, merch vendors will be present at MDF 2017. We’ll let you know more about where they’ll be located in the coming months.

Note that tickets will be limited in this venue format. It is highly recommended that you get your tickets (especially the 4-day pass) as soon as possible. 300 more 4-day passes will be released on Friday, July 22nd at 10 am EST. 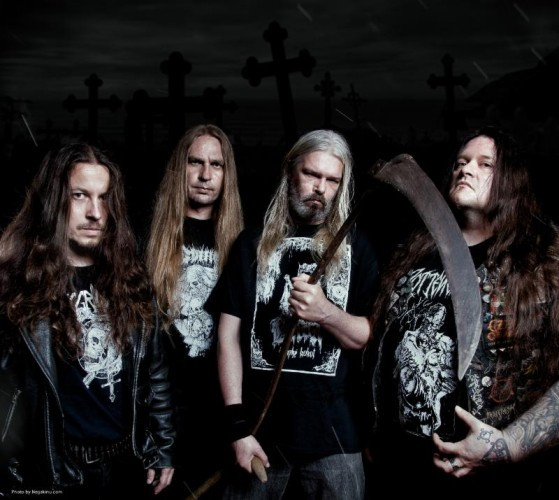 Next, I thought I would pass around a couple of new album announcements, one of which I am more excited about than the other. Can you guess which one?

Yesterday Century Media Records announced that on September 30, 2016, it will release a new studio album by Asphyx, which bears the title Incoming Death. The press release we received also included this statement from Martin van Drunen:

“Four and a half years after the release of Deathhammer we finally managed to finish its long awaited successor. It will be out on September the 30th, as always on our beloved label Century Media. Expect 11 unmerciful battering tracks in the typical ASPHYX death/doom style, but also the most varied ASPHYX material up to date without losing our rawness, brutality and heaviness. The album will be entitled Incoming Death. And like Deathhammer, it’s a phrase that doesn’t really exist, but refers to what entrenched soldiers cry out when under severe artillery fire. Thus “Incoming Death” implies another relentless bombardment of monstrous ASPHYX death/doom metal!

“Recorded on different locations throughout 2016 and once more mixed and mastered by the mighty Dan “The Man” Swanö. Serious ear bleedings guaranteed! It’s also our first record also featuring “Husky” on drums, who is now with us for already two and a half years molesting the pig skins with the absolute perfect ASPHYX attitude, passion, pride and mayhem. We are very proud of this best ASPHYX album ever! And knowing our dedicated fans worldwide, they will be proud of us as well! Soon we will hit the stages on every continent to do what we do best; Intense, loud, sweaty, filthy and ruthless live performances!”

By coincidence, I witnessed my one and only Asphyx live performance at Maryland Deathfest. I loved the shit out of it. I’m starting to pant like a winded dog in anticipation of this new album.

Oh, one more thing: In case you missed it, DECIBEL magazine included an Asphyx song in the June issue as part of their flexi-disc series, and because it appears that I failed to post it when it first appeared, I’m doing that now. The song is called “Deathibel”, which made me think of Mike Tyson for some reason. The issue is available here. 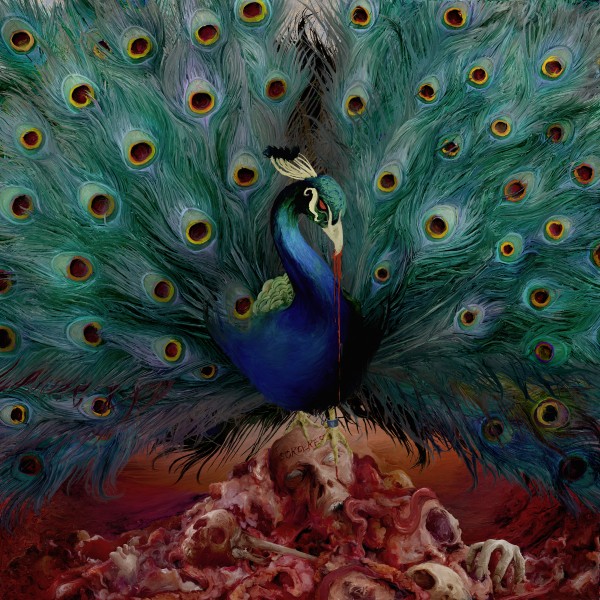 Now we come to the second album announcement. Yesterday Opeth proclaimed that their new album Sorceress will be released by Nuclear Blast on September 30, the same day as the new Asphyx album. The beautiful cover art by Travis Smith was also revealed. And, as in the case of Asphyx, the press release included a statement about the album by the band’s leader, in this case Mikael Åkerfeldt:

”The new album Sorceress is our 12th studio album since our beginnings in 1990. I find it difficult to understand that we’ve been going on for 26 years, let alone that we’ve made 12 records now, all of which I am very proud of. Sorceress is no exception. I love this album, as does the whole band. I wrote the music during 5-6 months and we spent only 12 days recording it at Rockfield studios in Wales. I find that once again we’ve taken a step forward. Or sideways, Or backwards. Somewhere!? It’s different! It’s extremely diverse. And if I may say so myself, extremely good.

“I feel the right to say that since I like to think I know this band better than anyone on the planet. Also, I always manage to detach myself from the record and listen as a fan. It’s a fine little record. My favorite in our discography right now. Of course. That’s how it should be, right? It’s both fresh and old, both progressive and rehashed. Heavy and calm. Just the way we like it. Hopefully there’ll be others around the globe sharing this opinion. It was a joy to make it. A fucking joy to record it, and a sheer joy listening to it. So there you have it!”

That Åkerfeldt says this album is his favorite in Opeth’s discography right now is interesting, though perhaps no different that van Drunen saying that Incoming Death is the best Asphyx album ever. One of my clever friends quipped, “The new Opeth album has some amazing artwork for what will be one hell of a collection of lullabies.” Perhaps he will be surprised (I hope so).

I’ll add that, in case you missed the earlier announcement, Opeth will be embarking on a North American tour, accompanied by The Sword after the opening date at Ozzfest/Knotfest. The schedule is below. 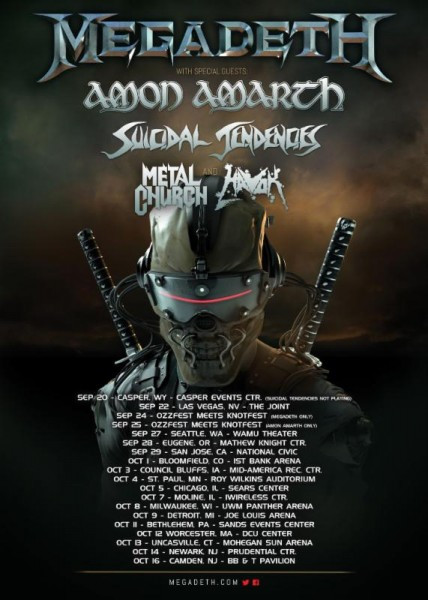 Now I’ll turn to a couple of new tour announcements that involve some very big names in the world of metal. The first one is headlined by Megadeth, with support from Amon Amarth, Suicidal Tendencies, Metal Church, and Havok. It runs from September 20 through October 16 and, like the Opeth tour, includes a stop at Ozzfest/Knotfest (though it seems that only Amon Amarth will be performing there rather than the entire tour line-up). 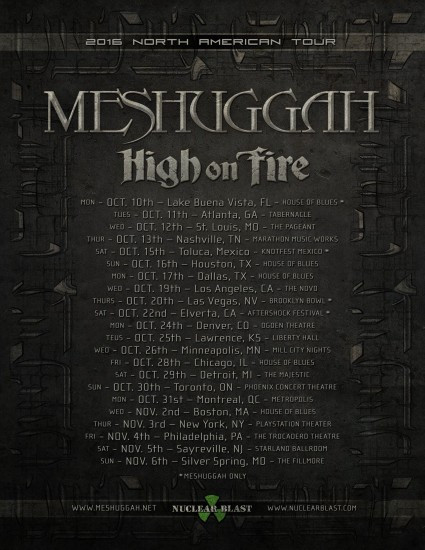 Also yesterday, the immensity that is Meshuggah announced that they will headline a North American Fall 2016 tour, along with High On Fire (which is an unusual pairing but a clever one). This tour begins in Lake Buena Vista, Florida, on October 10th (though High On Fire doesn’t join the tour until the second stop) and concludes in Maryland at The Fillmore in Silver Spring on November 6th, and it includes a detour to Toluca, Mexico. Here’s the itinerary:

I’m very disappointed that the closest this tour gets to the Pacific Northwest is the unincorporated community of Elverta, California, a distance from Seattle of 753 miles. However, my comrade DGR will no doubt be happy since Elverta is about 20 miles from Sacramento. I hadn’t heard of the place before, and The Font of All Human Knowledge explains:  “The community has two street lights, very few hills, and no major bodies of water.” It will have even fewer hills after Meshuggah finishes leveling them.

Here’s a very short video trailer for the tour: