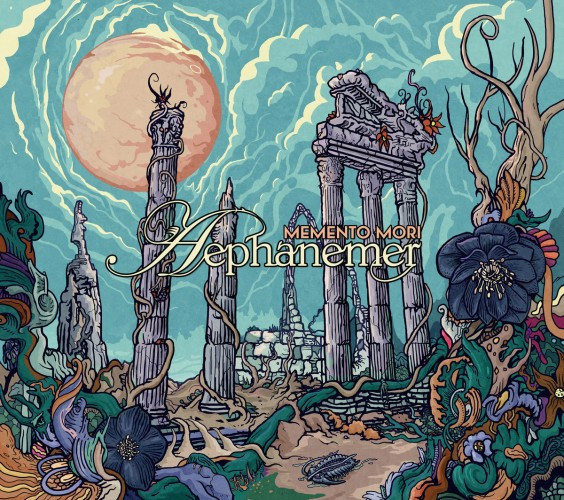 Until seeing the wonderful cover art that I put at the top of this post I had forgotten that Dark Tranquillity’s Niklas Sundin was a visual artist as well as a musical one. This creation adorns a new album named Memento Mori by the band Aephanemer from Toulouse, France. It will be released on September 16, but the band have already made one song from the album available for streaming and free download at Bandcamp. Its name is “Unstoppable”.

A cool synth intro (later picked up by the guitar) leads to a jolting, galloping, gliding piece of keyboard-accented melodic death metal with especially barbarous vocal savagery…memorable as well as blood-pumping. 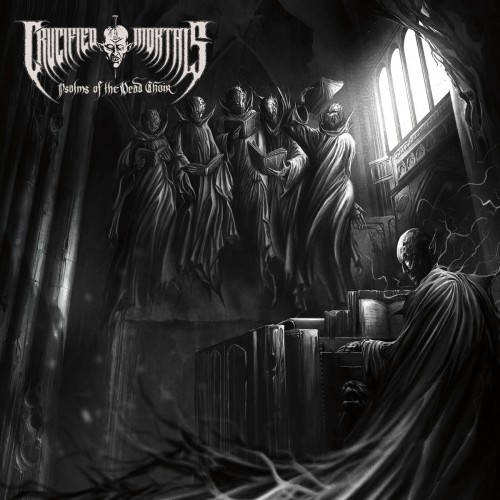 Five years after their self-titled debut album, Cleveland’s Crucified Mortals have a second one on the way via Hells Headbangers. Entitled Psalms of the Dead Choir, it has a street date of October 28.

For this release, the band has condensed itself into a two-man operation, with Reaper handling vocals, guitars, and bass, and Ash Thomas (Shed the Skin, Vladimirs, Faithxtractor) on drums — and guest guitar solos courtesy of Sauron’s Lore Lord. Here’s an advance track that appeared within the last 24 hours — “Behind the Lurid Mask”.

The name of this game is ferocious, jet-fueled, smoking hot death/thrash with blood-choked tyrannical vocals you can understand and a guitar solo that will set your hair on fire… (very cool cover art too).

I learned of this next band — Germany’s Lunatic Affliction — because the cover art and layout for their new album Im Bannkreis der Götter was created by one of my favorite metal artists, Misanthropic-Art. It’s a piece that wraps around the outside of a 6-panel digipack for the CD (to see a larger image, click this link). The album will be released in August by Kristallblut Records (a small German underground label).

Im Bannkreis der Götter is a concept album, and yesterday the band released Part II of the narrative, a track called “Die 7 Pforten von Kurnugi”. The swirling, murky haze of racing riffs and the pneumatic drums pounding beneath it prove to be electrifying, and when the ravaging pace slows, the song becomes majestic in its bleakness (the jagged vocals are demonically bestial, too). Excellent. 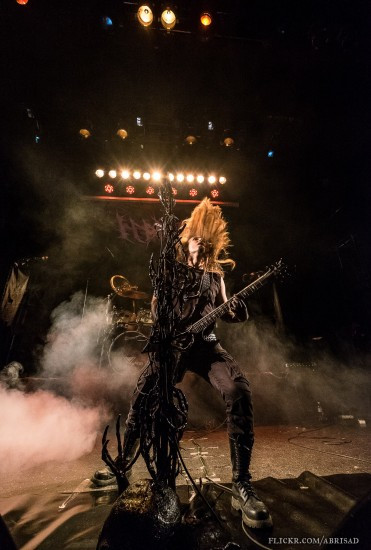 In a Shades of Black collection that I posted the day after Christmas 2015, I wrote about a striking video for a live performance by a band named Nabaath (who are Russian but now based in Ukraine), accompanied by dancer Mariya KarMa. The name of the song was “Iron In Your Throat”, and it’s one of nine on Nabaath’s third album, Common Graves, which was released last fall and is available in full on Bandcamp (and briefly reviewed by me here).

This morning I learned that Nabaath have a new video, this time a live performance of the song “Nuclear Satan” at the Noizr Fest last year in Kyiv, Ukraine. The video is really well done, and the song is well-named — it’s a nuclear black metal detonation that proves to be damned catchy (and damned headbangable) as well as scorching. 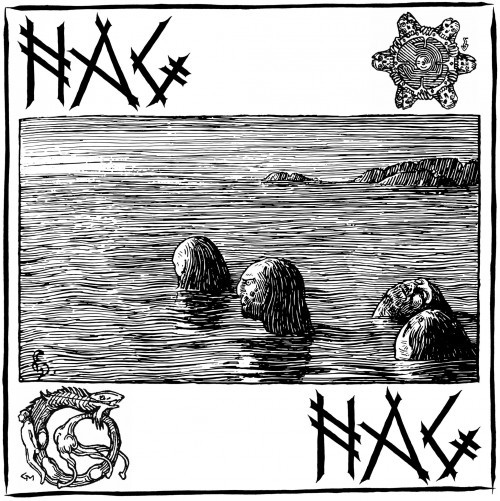 NAG hail from Stavanger, Norway, and they have a self-titled debut album due for release on September 2 via the Fysisk Format label (Haust, Moe, Årabrot, Okkultokrati).

In attempting to learn more about the music before deciding whether to download our promo, I found a new video released yesterday for a song called “Ancient Wisdom”. NAG introduced the link to it on their Facebook page by saying “If you like angry-looking men yelling into cameras you won’t be disappointed. Shot and edited by Ivar Vasstveit.” And indeed, I was not disappointed.

A fusing of crust, punk, hardcore, and metal that should get your head moving, and perhaps fuel your desire to punch the first motherfucker who gets on your bad side today. 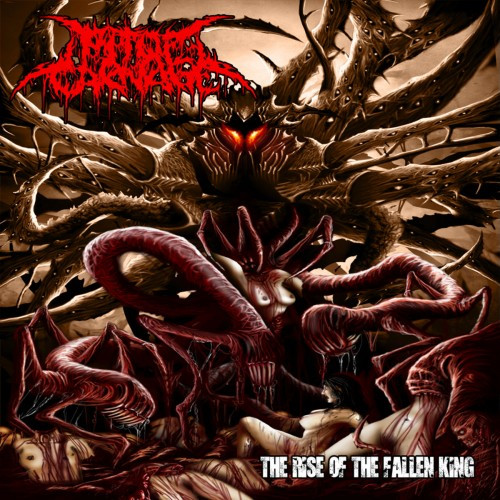 Today we also received a promo for an album named The Rise of the Fallen King by the two-man Danish band Pit of Carnage, which will be released by CDN Records on August 3. In deciding whether to download the promo, I checked out a YouTube clip for a song called “Pile of Corpses”, which turns out to have been up there since April of 2015.

If you feel the need to be blasted to smithereens and then have your smithereens hammered into bits of quivering jelly, this assault of heavy-grooved, brutalizing death metal (which is also eerily atmospheric) should do the trick.

After listening to this clip I discovered that a lot more tracks from the album have been up on YouTube for a while, and those can all be accessed here, or on Bandcamp via the link below. 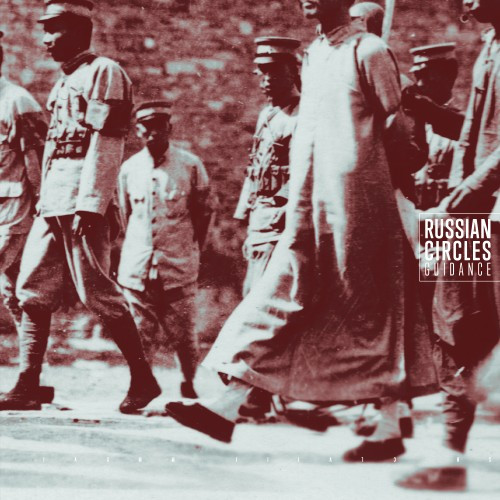 I presume Chicago’s Russian Circles need no introduction. Their new album Guidance will be released on August 6 by Sargent House. It was recorded by Kurt Ballou at GodCity Studio in Salem, MA. Three songs that I know of have premiered so far. The most recent of those is “Afrika“, which was the subject of a press release we received today.

“Afrika” is mesmerizingly beautiful… and grindingly heavy… and skull-clobbering… and even more beautiful for all that. I have trouble thinking of any bands who are the equal of Russian Circles in this genre space. 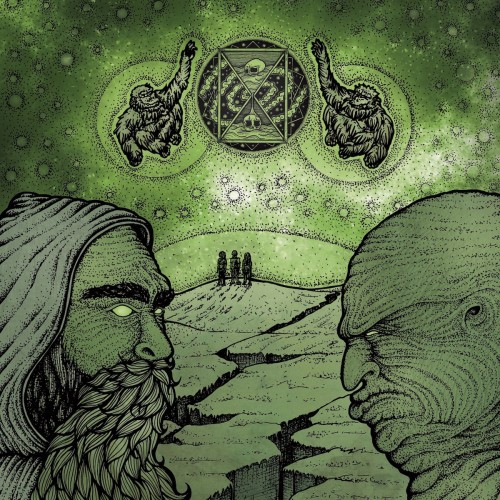 Here’s yet another instance in which I impulsively decided to explore the music of a band before deciding to download their promo, which was the subject of an e-mail reminder today from the label Pink Tank Records. This band with the unpronounceable name (which seems to represent in some way “10.000 km² gegen die Zeit“) are from Lübeck, Germany, and the new album (their second full-length) is called Orbit Dualkraut. It will be released on the 26th of August 2016 on limited vinyl, CD, and digital.

I decided to check out the two songs now available on Bandcamp largely because the label’s e-mail concluded with the words, “Thank you for your Plasma!!!” And in return I say, thank you for this incredibly catchy doom with the massive, fuzz-bombed riffs and the acid- trip soloing and the freaky guitar effects and the pulsing bass notes and the mix of vocal wails and abrasive growls. 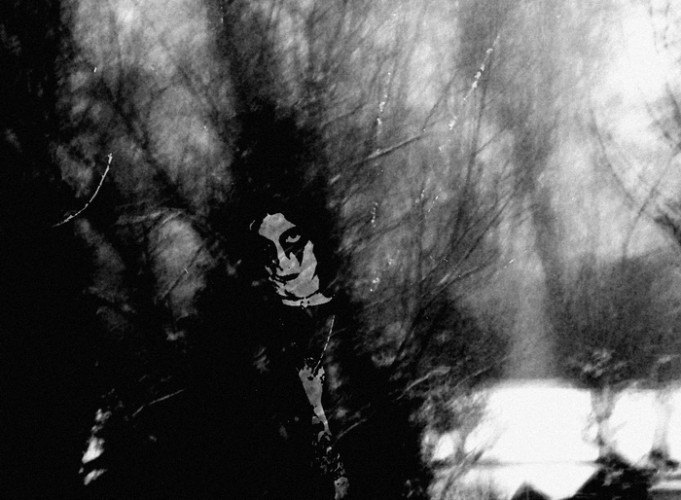 And now for that out-of-alphabetical-order concluding piece for this playlist. It isn’t metal in any conventional sense. It’s very simple. But I found it stuck in my head for a while after listening to it, and the video that accompanies the music is very interesting.

The artist is Anna M., the photographer and graphic designer for the French label Distant Voices. She calls her musical project Aube Grise. Her second album, Mauvais Augure, is set to be released at some point this Autumn.

This short piano piece is called “Tout ce qui est passé est immortel”. It was made during the recording sessions for the new album, though it won’t be included on Mauvais Augure. It certainly makes me very interested to hear what will be on the album.