I’m not as prompt in concluding this review of the festival as I was with the first two parts, but other commitments to our putrid site plus inconsiderate intrusions by the routine of daily life have screwed with my time since I got back to Seattle on Monday. On the other hand, the delay enabled me to upload videos of Day Three performances to YouTube, and I’ve collected those at the end of this post. I still intend to add more videos to the other write-ups as well.

As before, I’ve scattered through this post the best of a middling lot of photos I took with the same device I used to film the songs. Which would be my phone. One of these days maybe we’ll hire an actual professional who uses equipment actually optimized for these purposes rather than something mainly used for checking FB news feeds and sending texts. But probably not.

The third day at Migration (Sunday) began for me the same way as the second day — pounding coffee and pecking away at my laptop, working on a recap of the day before while the events were fresh in my unrefrigerated mind, where things tend to decompose if I don’t quickly get them out into a more lasting repository.

While occupied in that way I missed the first set of the day, by Dead To A Dying World. I heard from more than one person that they were great. Rotten luck for me. However, I did get to the Capitol Theater in time to see these guys: 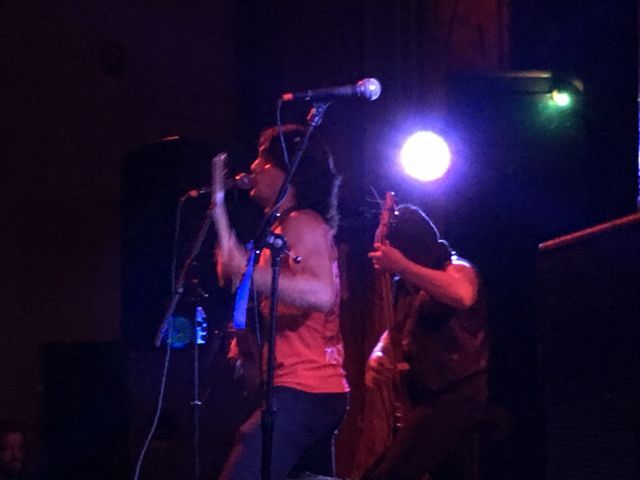 This marked the third time this year I’ve had the pleasure of seeing these death dealers from Vancouver, whose two frontmen are also in the ranks of the mighty Mitochondrion (and if you haven’t heard the In Cronian Hour split by those two bands, which we premiered in June, you really ought to go do that here).

For most of Sunday I positioned myself on the floor near the stage on the far right side where there was less of a chance that I’d be annoying the shit out of people behind me when holding up my phone. The downside was that it put me damned close to the big PA speakers at the corner of the stage. I got plenty of bass, but at least in Auroch’s case I lost a lot of the guitar in the mix. Still, I got a charge out of the band’s violent, chaotic set, which included a hellacious new song (“He Wreathes the Cross”) from their forthcoming third album, Mute Books. 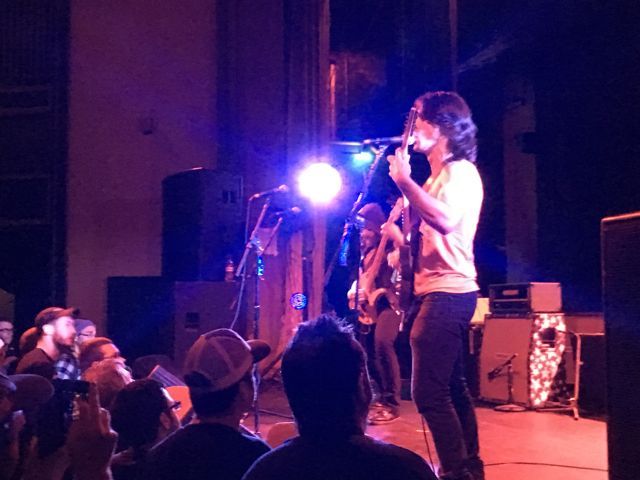 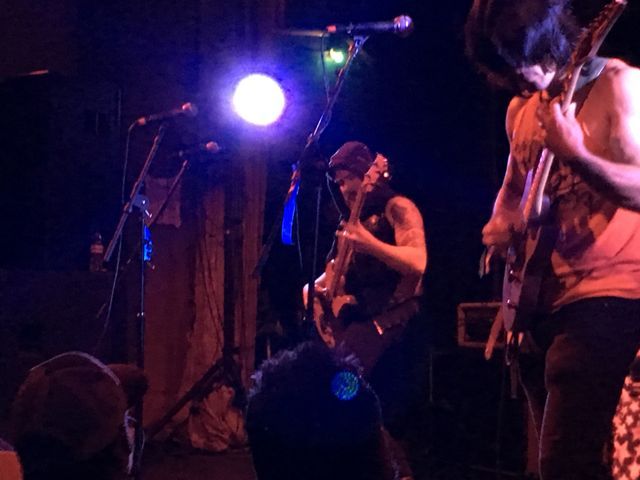 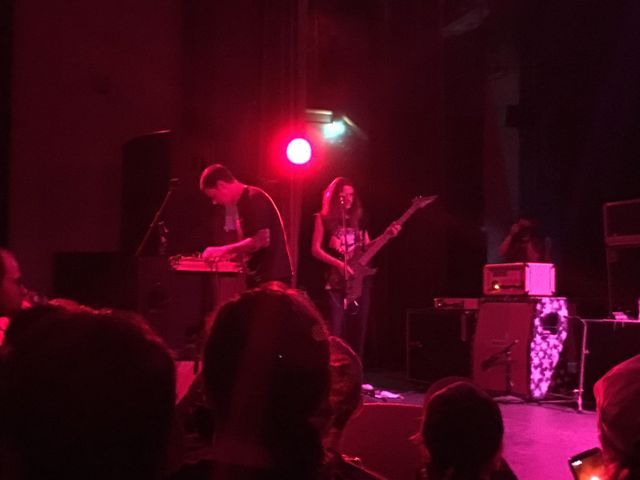 The East Coast band Full of Hell followed Auroch. I haven’t spent much time with their recordings nor ever seen them live, and so didn’t know quite what to expect. It proved to be a disorienting experience, with the music alternating between bouts of dark, abrasive electronic noise, seemingly designed to put your teeth on edge and soak your brain with black poison, and explosions of destructive, head-hammering grindcore.

The grind blasts were damned potent, and more my thing than the noise. I’m probably going to have to listen to more of their music to see if the pieces fit together better than I thought they did in this performance. 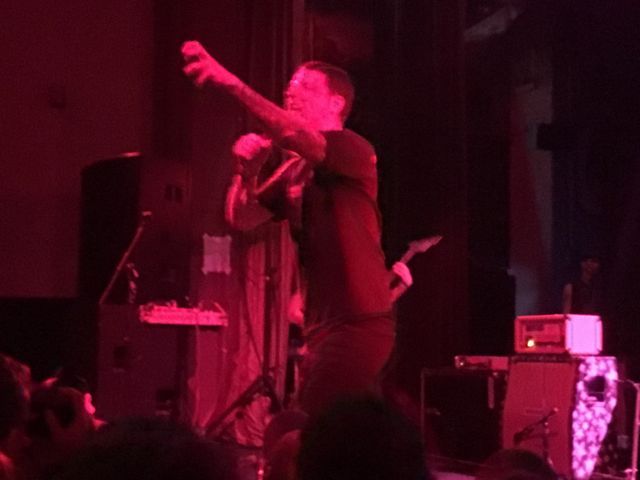 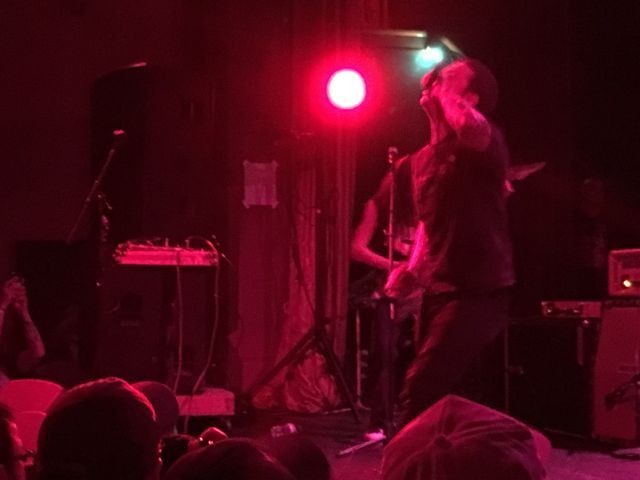 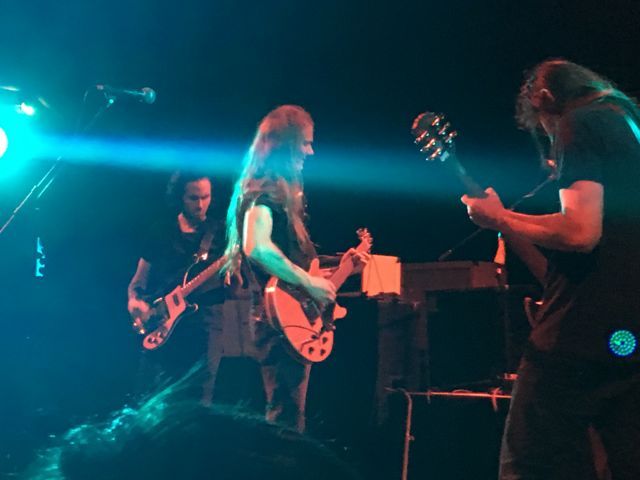 The new album Yodh by this one-man band from Portland is a staggering listen, a harrowing yet enthralling melding of black metal and doom, and that album made Mizmor one of the (many) bands at Migration I was quite eager to see. I’m not aware of which musicians A.L.N. recruited to make this live performance possible, but together they put on one of the fest’s highlight sets in my book. It was scorching, heavy as hell, and — to re-use that word — enthralling. 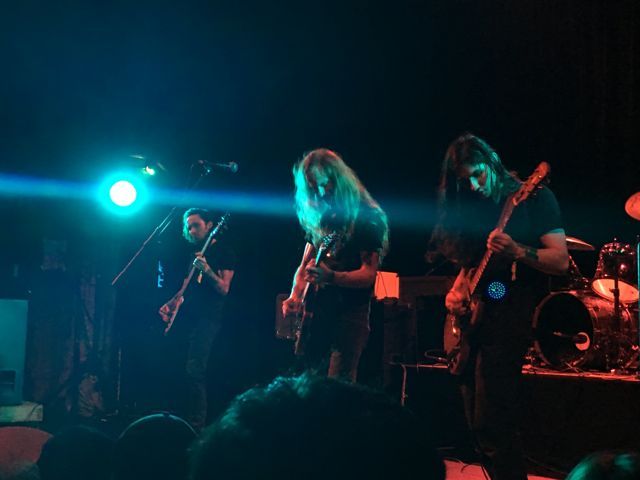 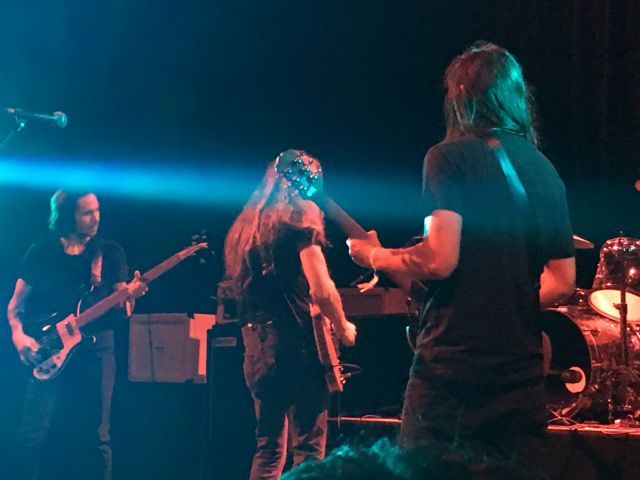 Now comes the time when I provide an opportunity for our readers to roll their eyes in disgust and tell me what a dumbass I am, because I missed the performances by VHÖL and Mutilation Rites. In my defense, I thought the chance to catch up with Austin Lunn over a few beers and to meet his good friend Winterherz of Waldgeflüster at the same time was worth it.

I did make it back inside the Capitol Theater in time to catch most of the set by this band: 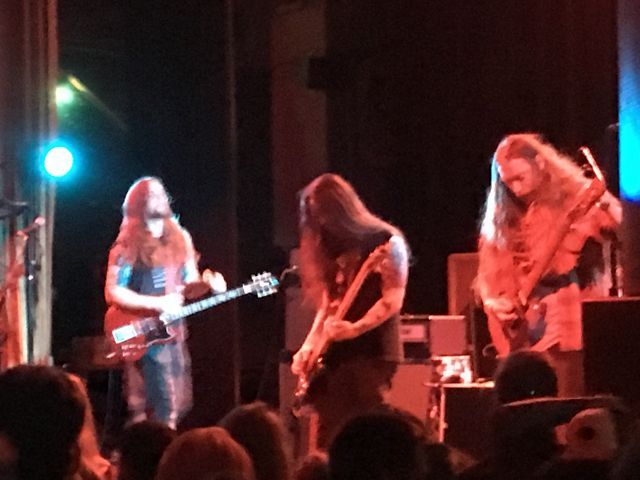 More than one band have adopted the name Hell, but this one comes from Oregon, and so I’ve seen them once before when they played in Seattle. I have very good memories of that experience. And now I’ve got more good memories to add to those, because Hell’s set at Migration was a pulverizing slow-motion avalanche of sludge/doom, thoroughly dark and thoroughly capable of dismantling an average human’s skeletal structure while infiltrating the brain with tendrils of seductive melody. 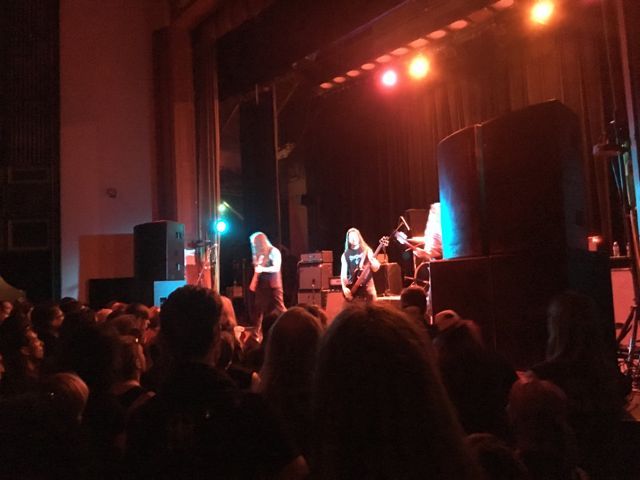 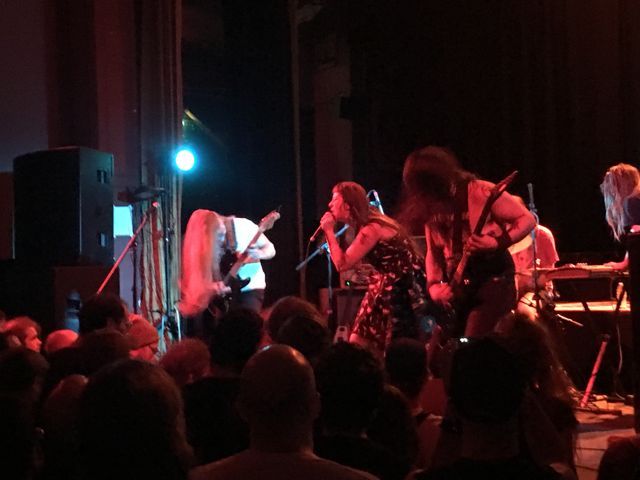 Minnesota’s False put on a great pre-fest show, covering four songs by Emperor. On the last day of the fest they came back to their own element, which is to say an absolutely gripping, intense, and emotionally powerful performance.  The music is mostly searing, with penetrating guitar and keyboard melodies that become captivating at the same time as the frontwoman Rachel is transfixing attention by transforming herself into a woman possessed by demons.

As many times as I’ve now seen this band, I was still left drained and stunned by their performance. One of the most striking moments came near the end, when guest vocalist Sarah Green (who also appeared during a song with Cavernlight at the pre-fest show) came on stage to join Rachel in a remarkable duet. I did manage to film just that brief sequence, and it’s included with the other videos below (including a longer one from the False set). 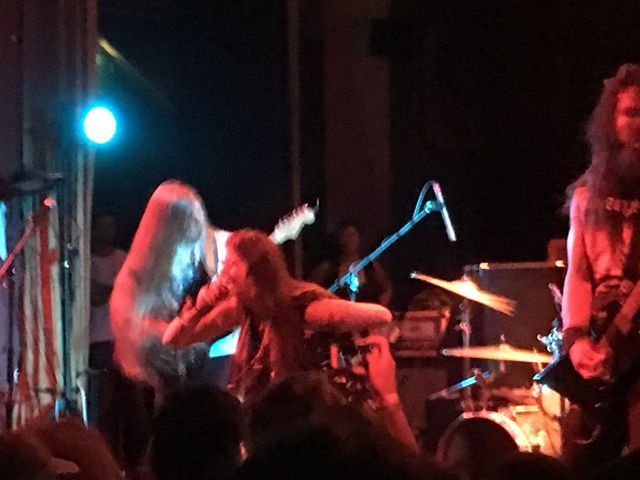 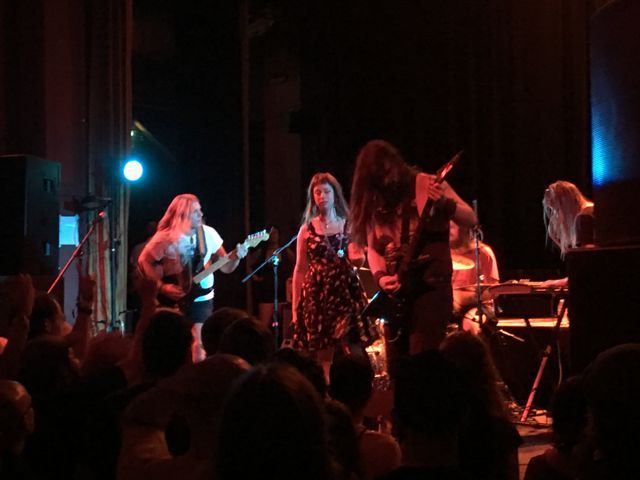 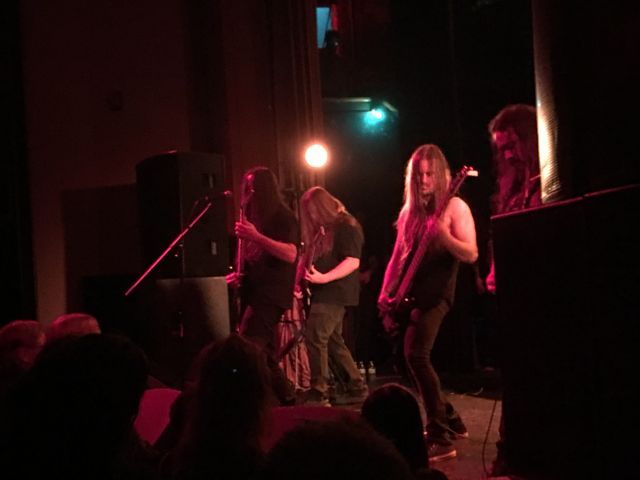 I didn’t foresee this happening, but Mournful Congregation’s very long set proved to be a near-perfect way to end my experience at Migration Fest. The songs were as long and as slow moving as a geologic epoch. They were as heavy as a square mile of the earth’s mantle. Damon Good’s growl was as deep and craggy as an ocean trench. And all that titanic misery was leavened with transcendent melodies (yes, the melodies were also sodden with tears, yet beautiful).

To be honest, I don’t often listen to this kind of music in my free time. But at the Capitol Theater on Sunday it put me into a trance. And I mean that literally. At some point the set ended, and for me it was like waking up from a dream. I staggered into the street to say good-byes to some new and old friends. 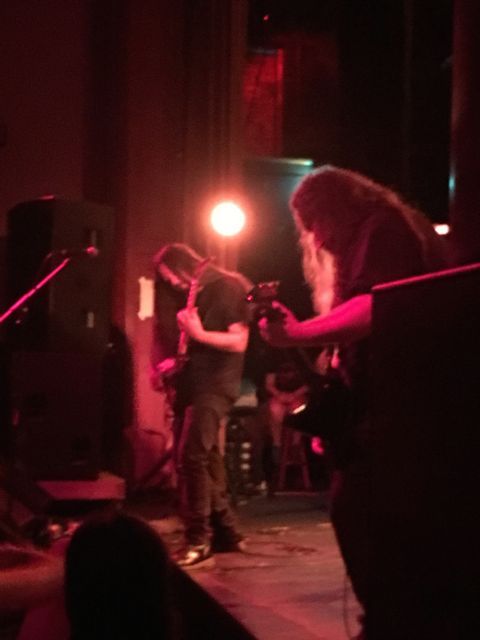 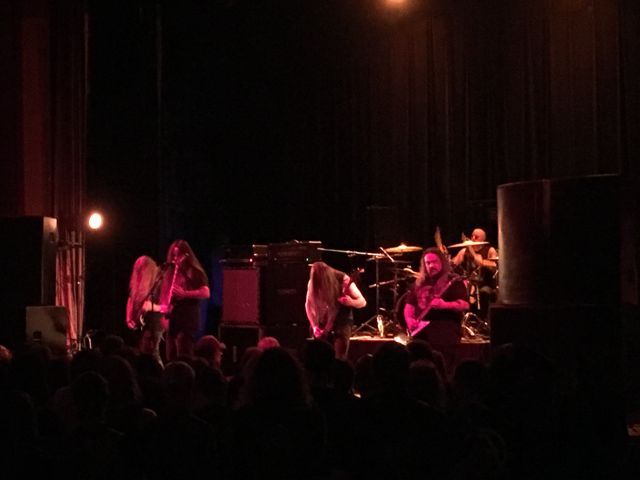 It would go to far to claim that there is a “community of metal” composed of tolerant, caring, mutually self-supporting people inspired and united by a love of this kind of music. All you have to do is spend a few nauseating minutes perusing the comment sections and forums at certain metal sites to realize how wrong that kind of claim would be. And you don’t have to dive into the cesspool of the internet to encounter assholes who are into metal — flesh-and-blood encounters are all too common as well.

But I definitely will make the claim that Migration Fest — the bands, the people who worked their asses off organizing the event and running it, and the people who attended it — represented something like the ideal of that community of metal, an ideal made into a reality for a handful of days in Olympia.

I sure hope this happens again, if not next year then two years from now. It was too good not to do it again. Thanks to everyone involved for an indelibly memorable long weekend of great music and fellowship.

And now here are some videos….