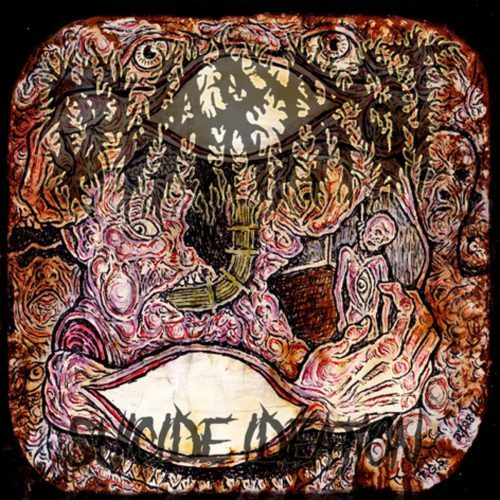 (DGR prepared this review of the new album by the Swedish/U.S. band Ovaryrot.)

Every once in a while we’ll come across a release that makes the hair fly back from minute one and then leaves us glued to the wall for the entirety of its run. Not that it is usually a mark of quality, but sometimes from the first moment an album will start out sounding like someone taking a saw to sheet metal and somebody else hammering on a trash can behind it. Sometimes the music is so abrasive that you kind of can’t help but be entranced by it; judgments of quality usually come after the second or third listen, which is just about the time when  you parse out exactly whatever the fuck that previous forty-some-odd minutes of whirlwind was.

Ovaryrot’s Suicide Ideation — which came out on August 14th — is one of those albums. Not that we would ever expect a band who go by the moniker of Ovaryrot to play nice; we’ve learned our lessons there before. 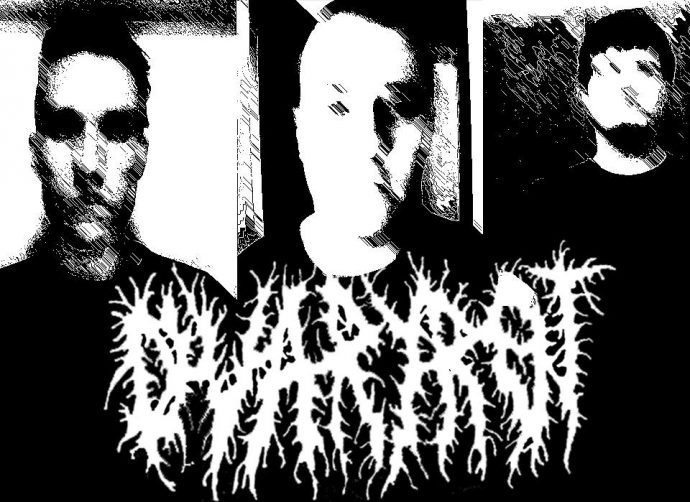 Ovaryrot are an international deathgrind band — with members split between Sweden and the United States — with a history of both slam and goregrind influences invading their sound. A jog through their discography is one part mess, one part death metal and grind metal warzone, and one part disgusting shock horror show. Suicide Ideation, with its evocative cover art in tow, cranks up on the warzone aspects of their sound. A good hunk of this album sounds like a jumble of varied genres all thrown into a pit and armed with sharp sticks, and we get to reap whatever cacophony the ensuing battle provides. It is in that sense, that Suicide Ideation proves to be very, very fun.

Suicide Ideation is, to put it politely, a screeching hellbeast. For all of its storm and fury, in actuality the album is a remarkably clear-sounding screeching hellbeast, and so Suicide isn’t given to the usual tropes of this genre. Although the music itself could soak the ground with the rest of its murky brethren, it comes through clear as a bell. In other words, it’s a screeching hellbeast that knows how to enunciate.

The great irony is that the only thing buried in the mix a bit are the vocals, and given the amount of reverb, echo, and other effects layered on them to make them match the already-monstrous performance being delivered on the microphone, they still feel integral to whatever in the world Ovaryrot consider lyrics on Suicide Ideation (god help us if anyone can understand them on the first go).

I’d be willing to guess that the lyrics are horrifying, but in a different manner from the band’s early-career atrocities in song form. Suicide Ideation isn’t a goregrind disc, though the album art may lend itself to that assumption. Ovaryrot describe themselves as an experimental deathgrind band. The descriptor is an apt one. They’re not breaking huge molds with time signatures or getting all proggy. Instead, they bounce between genres at the flick of a switch, fusing elements of brutal death, grind, slam, and the five or six genres that lie in between them on that particular section of the heaviness scale. Sometimes they do it all at once, and Ovaryrot go from being this frighteningly heavy dose of death metal into unfettered chaos.

The album starts with “Capitulate”, itself starting as an electronic sampled mess. From the moment the song kicks in, you get an immediate taste of what most of Suicide Ideation is like. It’s a journey into utter ugliness, filled with massive vocal roars, massive chugging riffs, and gigantic drum swells that begin at assault-rifle and just don’t tone it down from there. Ovaryrot use Suicide Ideation basically to morph into a monster over the course of a half-hour, and you reap the destruction sown forthwith.

The longest song is the first song of the two-parter “Retrospective Nightmare” series of tracks, clockng in at a hefty four minutes and twenty seconds. Everything else erupts in about the three-minute range. “Dormant Aspiration”, which is something of a personal favorite based on the vocal performance alone, is one of the lighter tracks, alongside its slimmer brethren “Discarded: Gratitude”.

“Dormant Aspiration”, however, basically starts with a scream, and that scream drives the song more than the guitar and drum battering that follows it. “Discarded” is a little bit more traditional, but it’s about this point when you realize Ovaryrot are big fans of a particular brand of auditory chaos. There’s no real groove to grip onto too often on this disc. Instead, as a listener you just have to cling tenaciously to the closest flat surface and hope you don’t get swept away in the barrage that spills out of your speakers. Hell, the one groove at the end of “Discarded” — the one buried behind multiple layers of vocal noise — feels like the band are just being nice for a bit, and even that spills into “Repercussion” with its “lead” discordant guitar noise and the two “Retrospective Nightmare” songs, the two most aptly named tracks on this disc.

Those two songs run at a total of eight minutes combined, and the whole time you get the sense that these two songs are the ones Ovaryrot are most proud of, because if you thought the tracks leading into them were a warm-up, you were wrong. Whereas much of Suicide Ideation feels like chaos for the sake of being loud and heavy as hell, the “Retrospective Nightmare” tracks feel a bit more surgical and focused. Now it’s just not just grinding chaos for the heaviness and headbang-worthiness of it; this is every knob cranked to max and then used as a weapon. If Suicide Ideation weren’t this release’s title, I could’ve easily seen a case built for giving “Retrospective Nightmare” the title honor, because holy hell is it hard to walk away from those two tracks sometimes.

Ovaryrot have shifted gears mightily on Suicide Ideation: The artwork for the disc may suggest a chaotic mess of gore and innards, but the actual disc is just a giant nihilistic and apocalyptic fireball. It is a chaotic mess for sure, but it’s the sort of thing built upon a foundation of utter savagery. Everything present has been tweaked to come across as auditorily riotous as possible, though you can grasp every element present in every song — it just so happens that every element is dedicated to destruction.

I’m curious to see how people handle this disc, because this is quickly moving into the “angry at everything” pile of my music collection, and that playlist has gotten disturbingly large as of late. If you really feel the need to have flames erupt from your speakers, Suicide Ideation may be the route to go.