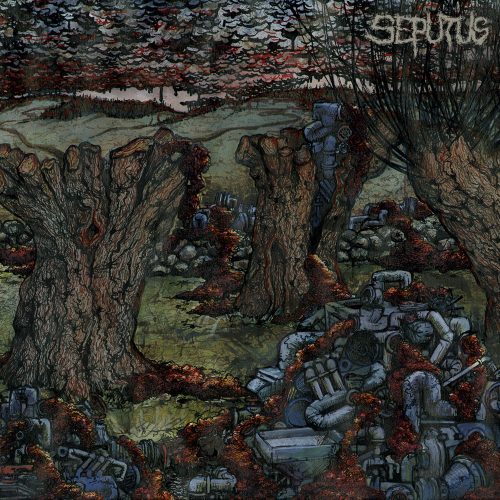 To back up a little and give you some information on the group’s history, the project first started as a collaboration between multi-instrumentalist (and current Pyrrhon drummer) Stephen Schwegler and Doug Moore way back in 2005. Together, they worked on material that was left unreleased before the project slipped into inactivity around 2009, which was the result of Stephen shipping off into the military. 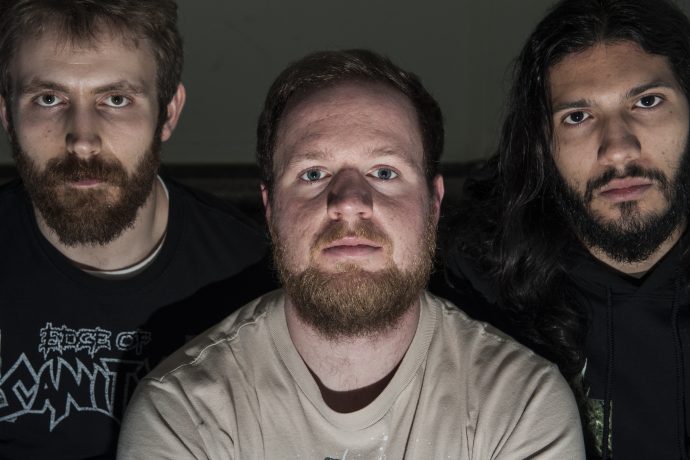 Fast-forward to 2013, when Stephen brought Seputus back and set to work writing the bulk of Man Does Not Give (the name of the new Seputus album) before leaving the military in 2015. At that point Erik Malave, the highly skilled bassist from Pyrrhon and Imperial Triumphant, joined Stephen and Doug as a member and completed the Seputus line-up.

So with all that explained, here we are today to premiere a fantastic new song by the band called “Haruspex Retirement Speech”. Given that all of the members are also in Pyrrhon, there are some sonic parallels between the two, but I strongly stress that Seputus is a very different animal from Pyrrhon. In fact, the biggest similarity between the two has more to do with both of them being acts focused on creating abstract and chaotic death metal than any real similarities in style or songwriting.

As far as what you get on “Haruspex Retirement Speech”, well, it’s fucked up for one thing, and quite different from the two singles released prior to this. Starting off with an almost old school death metal and punk-y beginning, the song then dials down to a temporary ringing pause before launching into the gloriously disturbed body of the song, with Seputus springing into a lethal cacophony of eerily reverberating dissonant riffs, spastic popping bass lines, off-kilter drumming supercharged by fearsome double-bass playing, all of it corralled together by the vicious screams and growls of Doug Moore. There’s even a fat, slow-motion groove-stomp closer to the song’s end that I quite enjoy before the track drones out of existence ever so quietly.

All in all, “Haruspex Retirement Speech” is an interesting case study in how to deconstruct death metal, black metal, grind, and more into a fresh form that’s unique.

Man Does Not Give is currently projected for release in CD format through the Canadian label PRC Music on September 23rd (though the date may change), at which point the band will be selling digital copies of it on their Bandcamp. U.S. CD and vinyl versions will be coming out later as well. For more information, check these links:

As you listen to the song, it will help to have its lyrics in front of you:

I was once a vessel for the message
Knitted through the fibers of my surging tissues
In my prime, it was my purpose
But by time stifled, warped, and denied issue

If you rip me open, spill me over
Entrails on the floor
I try I try to find the words
I saw encoded there before
But doubled up and bleeding out
All I see are empty ciphers
Hidden in the rolls

One Response to “AN NCS PREMIERE: SEPUTUS — “HARUSPEX RETIREMENT SPEECH””