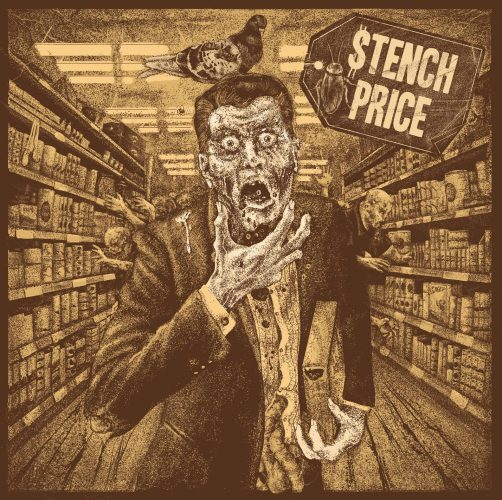 (We have Austin Weber to thank for this premiere of a new song from a band named Stench Price, accompanied by his introduction. We have Stench Price to thank for forcible re-wiring our brains, because they weren’t much good originally.)

Grindcore in 2016 has reached an interesting division, one present in the past but prevalent even more so now than ever. As we all know, grind is one of the metal sub-genres most difficult to fuck up — all you need is to be caustically loud,  have your music consist of brief raging sonic bursts, and throw in a bit of passion (or ideally, a lot).

But more than that, to rise above the majority of garden-variety grind in the modern era, it seems to take one of two things: Either a group’s willingness to take things in a more technical and complexly written direction, or to go the avant-garde route and deliver something super-weird and out there.

I enjoy both approaches equally, and even more so when a new grind group like Stench Price combines both of these schools of thought to create modern, highly adventurous grindcore.

And by group, I really mean supergroup on an obscene scale, as Stench Price is a multi-national project with members from many of the best groups around. And by that I don’t mean just the best grind around.

The group encompasses many key skilled players from genres ranging from technical-minded outfits to prog-minded outfits and seemingly everywhere in between. In their ranks they include legendary metal bassist Dan Lilker from Brutal Truth, Blurring, and an endless stream of other quality outfits.

In my experience, his involvement serves as a bellwether that a given grind project will be sick, as the dude seems to carefully pick only A-plus musicians and outfits to work with, which helps to give a supremely consistent seal of approval to the quality of the groups he chooses to work with. A full posting of the massive line up involved with Stench Price is listed below at the end for those interested.

Today’s premiere from Stench Price is a song that doubles as a video debut for the track “Pressure”, which features sickening guest vocals from High Tension vocalist Karina Utomo.

Both the video and audio aspects work in tandem to create a horror-film experience with an avant-grind edge that’s far from standard fare and will appeal mainly to adventurous grindfreaks.

The song/video we are premiering begins in an oddly upbeat way, becoming stranger and more fucked-up as the song and video delve into darker and bloodier territory. Within the deafening cacophony of “Pressure” lies a richness of strange musical elements colliding together for a song that somehow melds poppy, upbeat, and catchy segments with murderous death-metal-influenced grind rage.

As combined by this group, it makes for precisely the kind of grind music I enjoy and feel drawn to most. In fact, certain points of it definitely bring grind legends Discordance Axis to mind for me, from some of its riffs to the song’s many high-pitched screams.

While I’m not totally sure if “Pressure” is indicative of the rest of the record, not having heard it all, this band’s insane combined pedigree of talent leads me to believe that Stench Price will be a highlight release for grindcore in 2016.