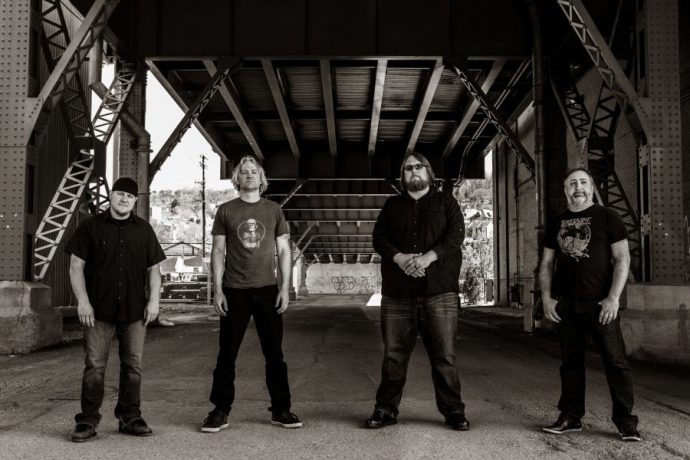 (Comrade Aleks conducted the following interview with Monolith Wielder, whose debut album will be released by Argonauta Records on October 17, 2016.)

Tight and powerful, Monolith Wielder breaks into the American doom stoner scene with their loud and savage debut full-length. Their riffs are overflowing with energy and fuzz, and they have enough enthusiasm to perform their songs at full capacity. Monolith Wielder was built on the stones of the Maryland doom scene and fed with Pittsburgh’s very soil; they know how to play it heavy and straightforward.

Break the Chains! Lift Your Eyes! And reach Illumination!

Justin: Hi, you have Gero von Dehn (vocals & guitar), and Justin Gizzi (guitar). To avoid confusion, let me clarify in advance that we have a band member named Gero, and are on a label run by a man who is also named Gero 🙂

I heard that most of band’s members have a pretty rich background. Where did you gain the experience which allowed you to record Monolith Wielder’s album?

Justin: We’ve all been playing in heavy bands for quite a while, but I met Gero somewhere in 2005-06 when he was in a band called Fear Itself, and later Von Dane. I was in one called Chano then, and the drummer and I started Molasses Barge, which continues today. Ben [Zerbe] and I went to the same high school, and have known each other since we were 14, 15. In the ’90s he was in a heavy/spacey band Halo’s Grace, and more recently a cinematic/prog-ish band The Mandrake Project. I’d always wanted to play in bands with both of them, and they were the first 2 people I asked to join me in this current venture. Raymond, who played bass on the album, has been in a bunch of bands too, playing guitar primarily. Dope Lake had been his most recent one. They were somewhat short-lived, but very good, and heavy. 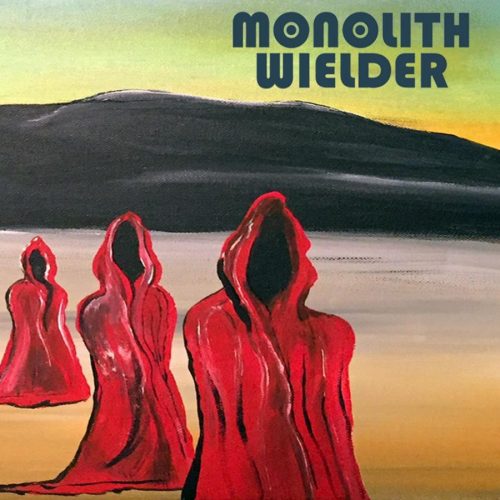 What’s the concept behind band’s name? What kind of Monolith would you like to wield?

Justin: About 10-11 years ago I made a MySpace fan page for The Obsessed, and in the bio when mentioning Wino joining Saint Vitus, I referred to them as “a monolith-wielding Southern Califonia unit”. It just popped into my head when trying to think of a way to describe their sound. I sat on the name for a while, and nearly used it with a few projects that didn’t get off the ground. Finally got a chance to use it with us. I’ve got a lot of good feedback on the name, but you’d be surprised how many people never knew what a “monolith” was.

Okay, the debut self-titled record of Monolith Wielder will be released on October 17th by the Italian Argonauta Records. What’re your feelings consider this event? Relief? Excitement? How long did you go waiting for this release?

von Dehn: Straight up excitement. The album has been ready for a while and we couldn’t be happier with the way it turned out. Although it’s taken a bit, we haven’t felt like we’re waiting for the album to come out. We’ve just taken the opportunity to start getting more material together. We like to keep writing and moving ahead.

What’s the story of your relationships with Argonauta? They’re from Italy, you live in Pittsburgh, wasn’t it easier to find some doom label in your area?

Justin: It sure wasn’t! No, we got little response and I could tell by the song counter in the link I sent everyone, that very few labels even listened to the album. Which is fair enough, they all get loads of submissions. I actually sent (Argonauta) Gero the wrong link, but he liked the couple of songs he heard enough to respond and asked to hear the whole album. He believed in us enough to make an offer, and we liked the way he runs the label, so we went with him.

How much of Pittsburgh is in your songs? Do you feel that the city strictly influenced your sound?

Justin: That’s an interesting question. Only in the sense that local heavy bands like Dream Death and Penance were in tight with the Maryland doom bands, and guitarists like Terry Weston (DD, Penance), Wino (Obsessed, Spirit Caravan), and Victor Griffin (Pentagram, Place of Skulls) have been a big influence on me. Gero’s a big-time grunge head, so he brings more of Pacific Northwest flavor. We all speak fluent Iommi/Sabbath, of course. 🙂

Your songs sound tight and really heavy — was that your aim when you were heading to the studio? What were your requirements to yourself during the recording session?

von Dehn: Absolutely. That was our aim from day 1: Doomy, down-tuned, groovy heaviness. Most of the songs you hear on the album were played again and again in the clubs before we ever went into the studio. We were already seasoned at playing the songs, we just needed to bear down with tempos and final touches. Jason Jouver, our engineer really helped guide us through a lot of that.

“Electric Hessian”, “Best Intentions”, “Into Madness” – you have some nice titles in your setlist; what kind of song lyrics do you prefer to use for Monolith Wielder?

von Dehn: You know, writing lyrics for me is all about what’s in my head at that moment. I rarely have an idea in my head before I sit down with headphones and pen and paper. The music and my own headspace guide me somewhere and then I take it from there. Naturally, our type of music doesn’t conjure images of flowers and balloons in my mind so it usually takes me somewhere dark. That being said, I don’t like to live entirely in the darkness so I tend to write with at least a little light hope peaking through the bleakness.

How do you see the prospects of the band? What are your plans for 2017? Touring, new album or will you spread your energy among other projects?

Justin: Definitely feeling really positive right now. We’re doing some re-tooling, and writing some new material and I think it is really going take things a step further. We should be able to get on the road some in 2017, and we will be hitting the studio again for certain. Thanks so much for the interview, we really appreciate it!