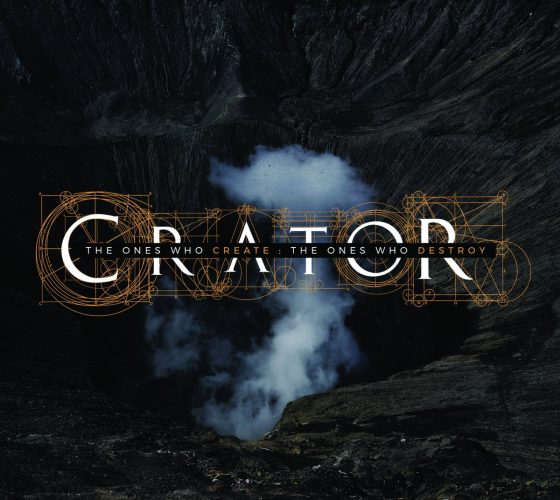 (Norway-based metal writer Karina Noctum returns to NCS with this interview of guitarist Jeff Liefer and vocalist Jason Keyser of the band Crator, whose line-up also includes drummer John Longstreth and bassist Colin Marston. Their debut album The Ones Who Create : The Ones Who Destroy was released last month and can be streamed at the end of this interview.)

I think Crator is the best of all the bands you play with (Origin, Krallice, Skinless) and it makes it sound pretty unique actually. Why did you guys feel the need to start this band? What are you aiming for with this project?

Jeff:  The aim was to create something punishing, dark, and cerebral.  Our styles clash to create a production whose sound diverges from our separate projects yet still retaining each individual’s creative signature.

About the lyrical themes, what is it all about and how do they relate to the artwork?

Jason: There isn’t as much of an overarching theme to the album, as every song is representative of its own individual influence that its subject matter had over me in the writing process, whether it be historical, literary, or otherwise. Some are more obvious than others in where they came from, “The Noble Lie” being a line from the Socratic dialogues, for example, but they all do share a common seething existential and nihilistic dread.

Do you guys compose your own parts and then try to make it fit or have you met to jam and compose together?

Jeff: Crator was almost completely written in a jam format; with the exception of the bass, which was composed after the songs had materialized.

When it comes to technicality, some bands want to break barriers, technical barriers, and impress the fans. I feel Crator is not precisely breaking any barriers, but you guys are moving the music forward with sound experimentation and a pretty interesting production. It is something other musicians can actually learn from. So what are your thoughts on this? What should aspiring tech bands do to develop this style?

Jeff: When creating this album we pushed our own personal creativity. It was an opportunity to explore outside the constraints of our established projects, which allowed the music to develop in a direction previously unknown to us.

I’m a fan of John and he tends to get most of my attention when it comes to everything he does, but here, damn, the strings are so interesting. The tone, the rhythmical pattern. I mean you have managed to make it dark while keeping it tech at the same time. Some bands sacrifice technicality to get it to sound darker. So tell me all you want about this, from arrangements to stylistic choices, inspiration…

Jeff: John and I wrote a majority of the material through jam sessions, and this caused the songs mutate and evolve over time. We did strive to strike a balance between something that was both technically proficient and somewhat unsettling. But it was the addition of Colin’s bass tracks that gave the music its full depth.  The bass adds an extra voice to the music, a subtle murky undertone that tells its own story, rather than simply supporting the guitar.  It is also a credit to Colin’s sound engineering skills that allows each contribution to stand out while not allowing anyone to overpower another.

I feel every song in the album is slightly different — I mean you succeed in breaking a monotone song pattern — but the balance is such that it manages to fit an overall musical structure at the same time. The album is both varied and a whole! I really like that. Is it something that you worked towards consciously?  Or is it just a bi-product of combined brilliant musicianship of all the band members?

Jeff:  We approached each song as its own entity.  They each were seeded with something ‘different’ or out of the ordinary from our own creative norms, and this resulted in each song having its own feel. I believe the process of evolving these songs through jam sessions and exploring different directions allowed them to form into one cohesive production, rather than just a collection of experiments.

I don’t know if is just me, but I think you guys have chosen to highlight different instruments in the songs. In some, the bass comes through as really strong. The drums get to shine in some other songs. I think you have a pretty interesting production there. So tell us more about how this came about — is it conscious planning or does this come naturally?

You guys have a powerful network, so what else are you planning when it comes to Crator’s future?

Jeff: Look for news in the very near future about upcoming shows and other events. We plan to continue to explore this project and see what it can accomplish.

2 Responses to “AN NCS INTERVIEW: CRATOR”