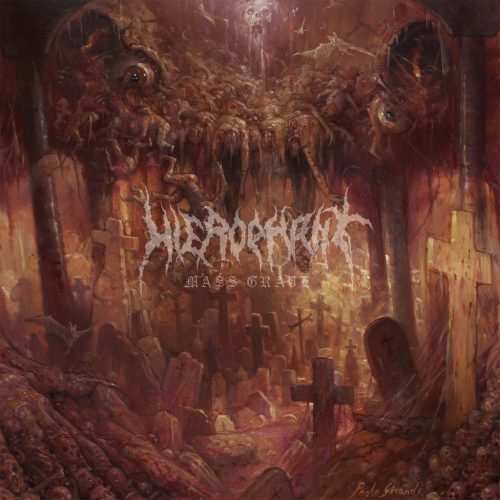 I nearly decided to call this round-up “Overpowering Audio Carnage” or “Your End Is Near”, but decided those headlines wouldn’t quite suit everything I’ve collected here — though they would suit most of it.

I’ve been meaning to check out the music from Hierophant’s new album Mass Grave and finally took the plunge when CVLT Nation premiered a track from it yesterday (thanks to Utmu for pointing me to it). I’m glad I was sitting down or it would have knocked me flat. 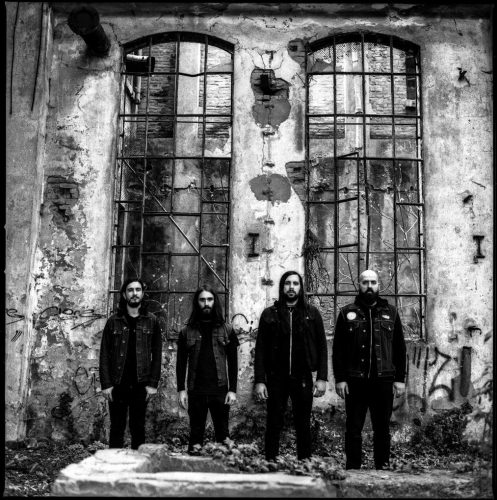 The name of that song is “Crematorium”. Appropriate name. The band call their music “deathpunk”. This song is a rumbling, roaring, titanic, meat-grinding piece of savagery. It rattles the teeth in your skull. It carves up your guts. It’s really good.

Mass Grave is Hierophant‘s fourth album and it will be released by Season of Mist on November 4. It can be ordered here. The astonishing cover art is by the Italian madman Paolo Girardi.

Two other songs have previously appeared from Mass Grave, and I’m including them below as well. Don’t say I didn’t warn you. 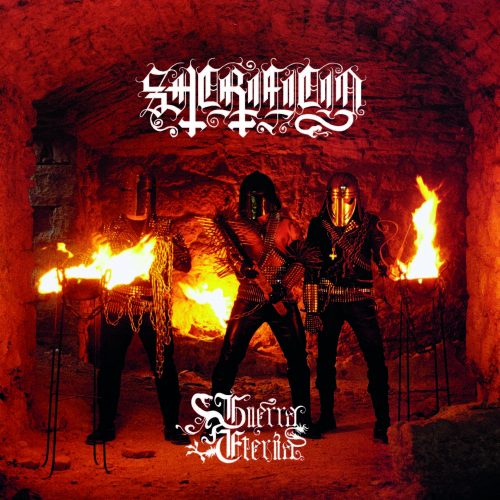 I tried to listen to this next track five times on Soundcloud yesterday. Every time, the player just sat there, as if stunned into a catatonic state. The sixth time was the charm, and after I heard the song I began to sympathize with the player.

The song is the title track to Guerra Eterna, which is the debut album by the Spanish band Sacrificio. I thoroughly enjoyed these words from Iron Bonehead’s publicist in the e-mail we received announcing the album:

“Warriors summon to the bugle sound of death marches and bloodshed, intoning anthems of a timeless black metal apocalypse. Fierceness of colossal might unbounded, throughout barbarous aeons of atrocious warfare. Devastation and misery overrule for eternity. Only the dead will see the end of war…this is the sound of Sacrificio‘s Guerra Eterna.”

Having heard the song, the words seem so appropriate. And what a great promo shot of the band for the album cover!

“Guerra Eterna” is a massively infectious beast, with big, fat, fuzzy riffs that get their hooks in your head damned fast, freakish soloing that reverberates off the inside of your cranium, and lots of inhuman howling. It also switches gears like a power-shifter, while pulling from a lot of heavy metal traditions as it goes. Hellishly good stuff!

Guerra Eterna will be jointly released by Iron Bonehead and Nuclear War Now! on December 9. 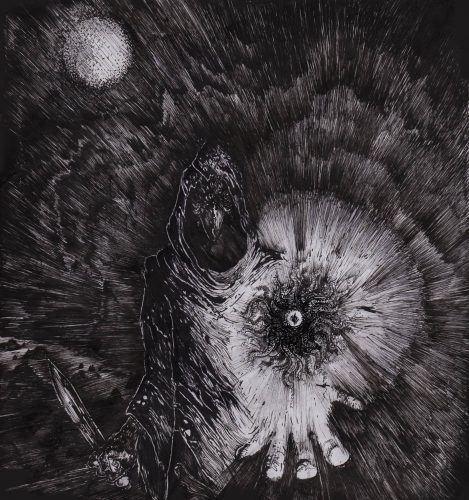 Here’s how I came upon this next song: Scrolling through my Facebook news feed I saw the striking artwork you’re now looking at from a post by the grim and great Nox Fragor Art. In his post he said it was created as the cover for an album named The Inner Vul by an Argentinian band named Black Vul Destruktor. So I scurried around and found the band’s page and then a stream of a song from the new album.

I was already primed to like the song (“Spectral Shadows”) based on the art and the band’s metal-as-fuck name. The music definitely did not disappoint. If you like murky, toxic, ravenous black/death that flies like a horde out of hell and stomps like a frost giant, this will set you up right. It’s massively heavy, both when it’s rampaging in a red-eyed fury and when it’s slowly nailing spikes in your coffin lid with a sledgehammer. The vocals are thoroughly crazed, too.

The Inner Vul will be released by a conspiracy of Sons of Hell Productions, Black Kaos Descent Records, and Metal Squad Records. 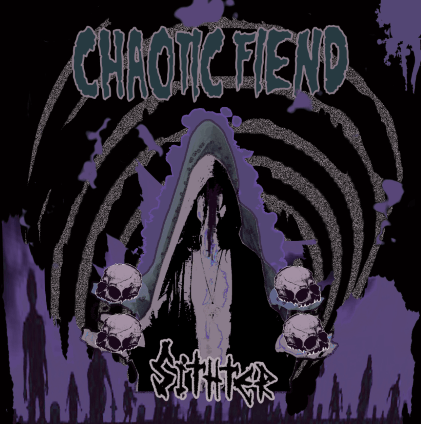 If your skull still retains any structural integrity after those first three bands in this collection, the next song will complete the wrecking job. It’s called “Masque of the Black Death” and it’s an advance track from an album entitled Chaotic Fiend by the Japanese band Sithter.

Sithter call their music “Sonic Death Sludge”, and that’s not a bad label. “Masque of the Black Death” is hard to pigeonhole. Sometimes it sounded to me like a cousin of Dragged Into Sunlight circa Hatred For Mankind, sometimes like Noothgrush. Sometimes it’s a berserker rampage, sometimes it’s slow and brutally crushing, and especially in the closing minutes when it really starts to steamroll, it’s an unstoppable hard-rocking juggernaut.

Chaotic Fiend will be released by Bonten Records on December 9. Order it via Bandcamp: 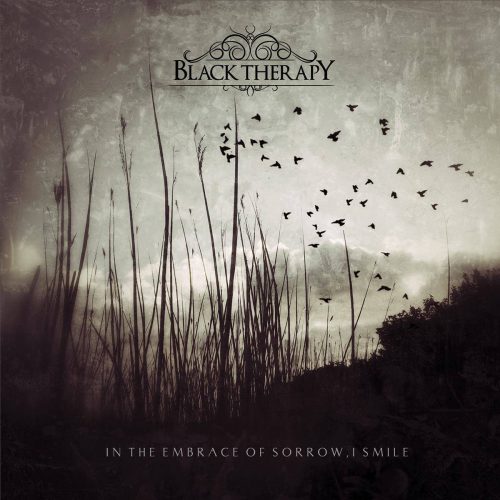 As I promised, now is the time to change course from the carnage featured above and to conclude this collection with two songs that have different kinds of appeal. The first is a track named “Stabbed” by the Roman band Black Therapy that was released for listening yesterday.

Those of you who’ve been hanging around our site for a fear years may remember the name Black Therapy. In October 2014 we premiered a lyric video for the title track to their EP The Final Outcome as well as a full stream of the EP, and then in the following February we also premiered a video for another song on the EP.

“Stabbed” is the first advance track from a new Black Therapy album (their second) named In The Embrace Of Sorrow, I Smile. It’s a real rush to hear –a vibrant and hard-charging offering of melodic death metal with a warlike and heroic air and truly caustic, barbarous vocals. The song also features a memorable chorus and a scintillating extended guitar solo.

In The Embrace Of Sorrow, I Smile will be released by Apostasy Records on December 2. It will be available for order here: 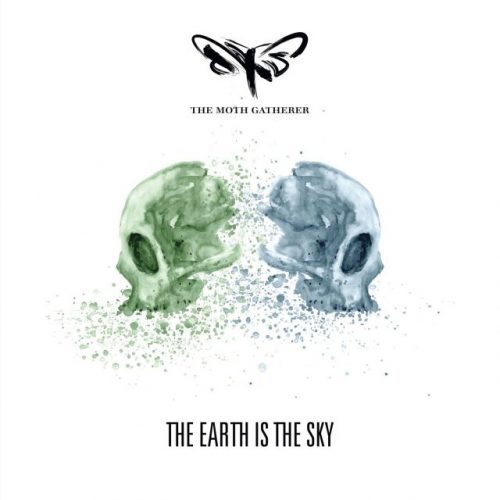 To wrap things up today I have a video directed by Albin Sköld (Illusive Illustration) for a song called “Probing the Descent of Man” by The Moth Gatherer from Sweden. The song is from The Earth Is the Sky, which was released by Agonia Records in November 2015.

When I came across the video I already had The Moth Gatherer’s name in my head due to the guest appearance of Victor Wegeborn on a track by Hanging Garden, the video for which I included in our last round-up two days ago.

On top of that, our friend deckard cain also called the album “the post-metal release of the year” in his 2015 year-end list on our site: “Similar to the Cult of Luna/Isis pack of post-metallers, except for the fact that they rely on their ability to crush under the sheer weight of the monolithic riffs. Oh, and stellar choruses.”

I slept on this album, but this song has its hooks in me, even though it’s an instrumental number. I enjoyed watching the video, too — and hope you will as well.