On October 14, 40 Watt Sun birthed an album that has proven difficult for me to review. Part of this is because the music on Wider Than The Sky is just about the complete opposite of what we cover here at No Clean Singing, though surely we’ve covered many bands that exclusively employ clean singing, as an exception to our “rule.”

But there are other reasons why reviewing Wider Than The Sky has been an atypical experience for me. In a recent interview with Sarah Kitteringham for Noisey (here), 40 Watt Sun’s Patrick Walker expressed his distaste with the band’s previous record label promoting them as “doom metal”. 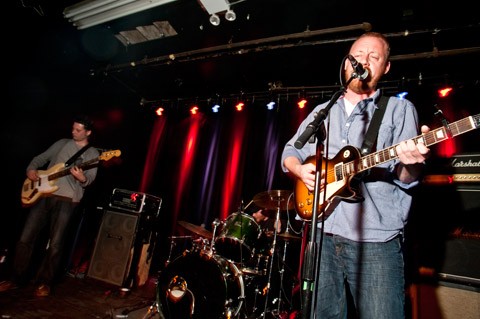 “Even just their insistence on marketing us as ‘doom metal,’ despite my pleading with them not to, that straight away pressed my work right back into the same corner that I’d just quit my previous band to get out of. There were things that upset me quite a lot.”

Furthermore, Walker told Kitteringham that he focuses on lyrics first when writing his songs:

“…the lyrics, the words come first. That’s what it’s all about for me; that’s the most important thing; the bedrock of my self-expression. The music follows that.”

Since I am a writer who is NOT a musician (not an iota of musical talent in my body), Walker’s comment here is particularly interesting to me. Back in September, Islander wrote an article called Litmus Test, in which his remarks on the lyrical content of our beloved genre prompted lots of thorough responses from our readers. I tend to err on the side of wanting to know the lyrics to a particular song I’m listening to, even if it’s just a quick glance.

Something else of note on this album is the clean tone of the guitars. If you were to hear a minute-long sample of one of the songs from Wider Than The Sky, you might find yourself asking, “Is this even metal?” Given that, along with Patrick Walker’s apparent disdain for his band being referred to as “doom metal,” why are we bothering with reviewing their new album? Because here at NCS we believe in exceptions. To that point, Wider Than The Sky is an exceptional album.

The songs here are sparse and even more minimalist than 40 Watt Sun’s first album The Inside Room. I’m inclined to think that Walker, Christian Leitch (drums), and William Spong (bass) implemented these tones to further distinguish 40 Watt Sun from Walker’s previous band Warning. On the surface, the songs’ structures may appear simplistic. They don’t usually follow the verse-chorus-verse blueprint. But to say the songs on Wider Than The Sky are simple would be an egregious error. Simplistic and simple are not the same.

Thanks to the clean guitar tone (not to mention overall production quality), Leitch’s drums and Spong’s bass have a more distinct feeling on this release. The two are a flawless rhythm section; their nuanced instrumentation is in the foreground on Wider Than The Sky. While one would expect the songs on a release like this one to have a slow tempo, you might not expect them to be such a soothing listen. The lack of “heavy” distortion in in the instruments actually aides the listener in seeing the deeper layers of these tracks.

Which brings me to the guitars and vocals. I often see the word “crushing” used to describe doom metal. And more often than not, that word is legitimate and wholly appropriate. But with this album, it is not. The songs themselves are not crushing. Sad? Indubitably. Beautiful? Without question. The guitar tone is clean; so pure that you feel like Patrick Walker is strumming right beside you. No show. No pyrotechnics. No getup, no costume, no corpse paint. Just a guy, a guitar, and a voice. And his words.

And therein lies exactly what makes Wider Than The Sky a “crushing” release. The sound of this album is not crushing. But Walker’s compositions and his vocal inflections come from somewhere deep inside of him that has been crushed. Levelled. Maybe even irrevocably destroyed. You can hear that sense of being crushed in each note the man sings. Sure, the songs on this release aren’t ones you would turn up to 11 to wake the neighbors. But the identity, the genuine frail spirit of this album, is what is crushing.

Walker’s obvious chagrin regarding 40 Watt Sun being labeled as “doom metal” begs another question. Is Wider Than The Sky even metal at all then? This is a metal blog after all, right? Why would we cover a release like this? Wouldn’t it be better marketed to the indie/folk rock crowd?

I can only answer that with my own opinion. An album like Wider Than The Sky is a major asset for metal in 2016. The reason is because it is a “heavy” album, even if it doesn’t sound like what we typically think of as “heavy.” In his review for Neurosis’ new album Fires Within Fires, Wil Cifer wrote, “Heavy just comes in different colors.” He described the latest Neurosis release as, “emotionally heavy rather than heavy metal.” As a corollary, I would add that the essence of an album can be crushing even if its sound is not.

Not everyone will like Wider Than The Sky. And that’s just fine. But for those who do, I expect it will be an album they keep close to their hearts. One they will reverently go back to five years from now. But hopefully we’ll have another new 40 Watt Sun album by then.

The album is available on iTunes here, Amazon here, or directly from the band here.