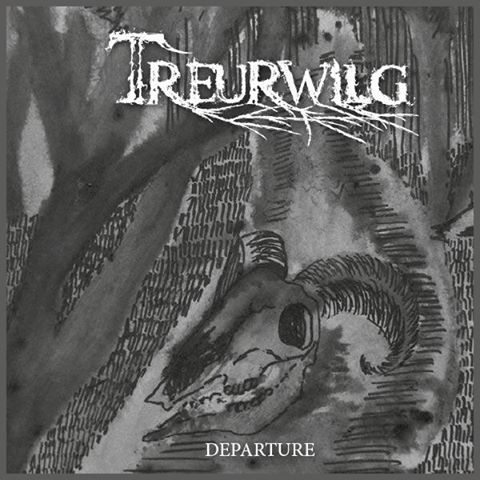 (Grant Skelton reviews the debut album by the Dutch doom band Treurwilg. and brings us a premiere stream of all the songs.)

Earlier this year, I stumbled across Treurwilg on Bandcamp. In January, they released an album of tracks recorded live at the Little Devil bar in their hometown of Tilburg. The album art intrigued me, so I gave it a listen. Since then, I’ve been chomping at the proverbial bit for a proper studio album. So when Treurwilg unveiled the track “As His Final Light Is Fading” from Departure, their debut release, my expectations were exceeded. Readers may remember that I featured the track in a previous Seen & Heard. There, I described it thusly:

“The track is heavy and slow. Heavy like a stony albatross about your neck. And slow like the way you’d die from drowning. It’s also ambivalent, fluctuating between violence and melancholy. The last minute is absolute savagery that flays the flesh of the inner ear. And I mean all that in the best way possible.” 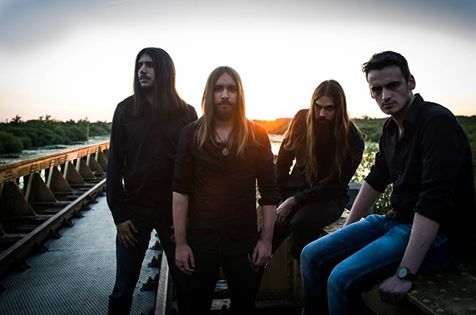 I stand by that assessment. Previous incarnations of the tracks “Labyrinth” and “The Vacant Void” appeared on Treurwilg’s live album. If you’ve been following the band since then, you’ll be elated to know that these two songs have been recorded for Departure. It seems that the band took some time performing most of these songs live before putting them on tape.

If you’re new to Treurwilg, their lineup is as follows:

The single best word that I can think of to describe Departure is “multi-dimensional.” Doom is the soil that Treurwilg have tilled, thus offering us one despondent bloom of an album. But I hesitate to just casually stamp the word “doom” on this album because of the plethora of tools in the band’s arsenal. As an example, consider the aforementioned track “As His Final Light Is Fading.” As the track evolves, the doom element becomes unhinged. The song has a black metal soul, and it’s as if Treurwilg are attempting to restrain it… until the last minute of the song. Just after the 10-minute mark, the song explodes into a volley of cranial crunchery. Therefore, if you’re someone who’s averse to doom because it’s too slow, take a listen to this track and you won’t be let down.

This track, along with the final two tracks on the album, feature sections that are in fact quite tranquil. “The Vacant Void,” for example, opens with a circle of spectral riffs that, at about two minutes in, build into an onerous crescendo. Then, just at the five-minute mark, Treurwilg slow the pace into a calm and meditative bridge.

The title track may be my favorite on the album. The pace of the song makes me think of a thunderstorm. In the beginning, the temperature drops. The sky rumbles, cueing icy precipitation. And before you can get to safety, you’re trapped. Ensnared by smoky, billowing riffs and carnivorous growls.

In my estimation, those who are put off by doom metal find it slow, boring, and anticlimactic. To be fair, some bands can indeed pull of ten solid minutes of droning riffs. But the doom scene at the moment is heavily populated with decent bands. And what makes a band like Treurwilg stand out is their willingness to think outside the proverbial “doom” box. The tracks on Departure range in length from just under 6 minutes to over 11. Each song is separate and distinct from the others, without losing Treurwilg’s particular flavor. The guitars, especially the leads, are emotionally provocative. On the surface, the band’s approach may appear familiar. But a thorough listener will experience an assortment of musical nuance. Very highly recommended.

Stream Departure via Soundcloud below.

Purchase the album from the band here:
https://treurwilg.bandcamp.com/

2 Responses to “AN NCS ALBUM PREMIERE (AND A REVIEW): TREURWILG — “DEPARTURE””