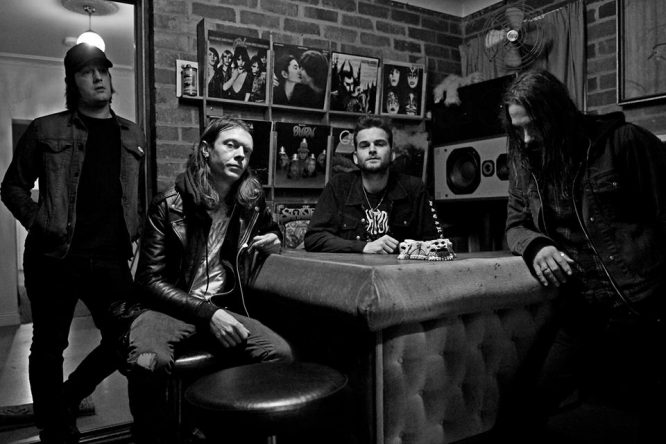 (Comrade Aleks returns to us with this interview of Scott Penberthy of the Australian band Holy Serpent, whose new release Temples was revealed earlier this fall.)

Australia, with its vast areas, is a hard place to live when you play doom/stoner. You need to survive as the aborigines did, crossing huge distances to find a place where you could stay and play your tribal tunes. However, Holy Serpent have done it successfully since the year 2014 when they recorded their self-titled EP. Scott Penberthy (vocals, guitars), Nick Donoughue (guitars), Richard Orr (drums), and Michael Macfie (bass) continued to practice their hypnotic music ’til they attracted the attention of RidingEasy Records, who released the EP on CD and vinyl in May 2015 and has now released a full-length work, Temples.

Have you seen its artwork? Take a look, it’s really nice. And don’t forget to check the album. Meanwhile, let me introduce you to Scott Penberthy. He’s here to answer a few questions about new albums. 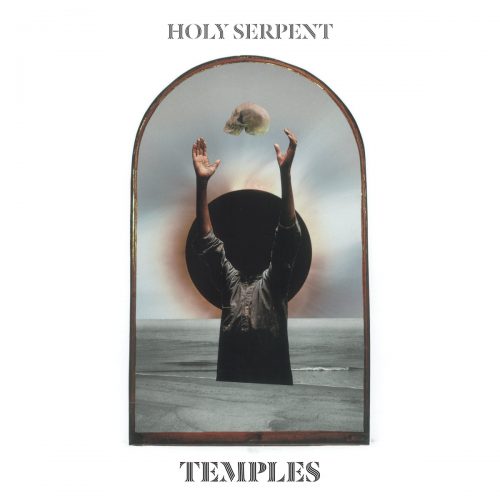 Hello Scott! What’s the band’s current state? What is your plan now that you finally have the debut full-length on your hands?

Hey Aleks! We have just put out our second album. Both albums are 40 minutes in length, 5 songs on each. You could say they’re both EP’s or both full albums, whichever way you want to look at it. We have long songs, so 40+ minutes to us is an album’s worth. It’s the ideal amount of playing time for pressing on vinyl, so we tend to aim for that. We have been on a short tour up the east coast of Australia and over to Adelaide with a few regional Victoria shows as well.

By the way, what is the story of Holy Serpent? How was it born?

Nick and I started writing the music back in 2014. We were working at a bar together at the time and started collaborating. We put a band together and recorded our S/T debut album at the end of 2014 and started playing live.

The band’s name, and the title of your fresh new album Temples, build together a sort of occult concept. So what do you intend to channel through Holy Serpent?

Well, for me I’m just trying to write lyrics that can match the intensity of the guitars. We definitely have an occult aspect to the lyrical content. It’s called “doom” music, so my lyrics are generally pretty dismal. As a whole the music we create is, in a way, like casting a spell. We definitely try to summon some sort of demon when we play live.. perhaps from within.

Speaking about musical influences, which ones would you mention as the general ones? What kind of sound did you aim to extract from your instruments?

We’re into heavy metal obviously. I am into psychedelic music too, so I try sneak as much of that influence in there as I can. For the guitars and drums, we tend to make them sound as big and loud as possible, whereas the vocals provide an ethereal icing, atop the sonic cake.

True to say, I expected a different sort of artwork from a band named this way, but you have chosen that cool abstract image; what made you do this?

We wanted something different. We enjoyed the collage aspect of our S/T artwork and wanted to continue on that theme. This album to us sounded a lot more serious, so we went for something a bit different and unique in the genre of music in which we play.

The band recorded that self-titled demo in 2014 and the work on Temples took almost 2 years. How long did you actually record new songs? In which studio did you work on it?

We recorded Temples with Jason Fuller of Goatsound Studios over a period of four days in April.

What kind of obstacles did you meet on your way to this album? Or was this recording session just natural and easy-going?

We were in between drummers at the time of recording, which wasn’t ideal. Luckily we got some help from a talented drummer by the name of Danny Leo to fill in for the recording sessions. We already had the album demoed and fully written. Danny was an absolute pro and learnt the songs in a handful of practices. Kudos Danny!

Are you satisfied with the final result? What makes you proud of this material?

We are happy that we even got to record a second album! It’s an amazing feeling having two records proudly sitting there in your record collection. We are satisfied with the final result, it was a hard record to write as we were really pushing ourselves. We hope you guys enjoy it!

I heard that organizing gigs in your region isn’t an easy task, so how do you plan to support Temples?

We are almost finished with a 7-date tour for the release of Temples. The only thing is that the next major city is like a 10 hours drive in Australia. That’s the real issue with touring, it can be very hard sometimes. People still turn up for shows and the support for live music down here is pretty good. We did a tour with Radio Moscow and Kings Destroy in February which was brutal. There were 12 people crammed into a van that was packed to the roof with gear. It was a great tour and I’m glad we did it, but it can prove difficult touring Australia on the cheap.

How did you manage to get on the same stage with Acid King? What is your experience of playing live shows in Australia? And have you ever played abroad?

We were lucky enough to share the stage with Acid King at Doomsday Festival a couple of months back. They had an incredible live sound and an absolute calmness about them onstage. It was enthralling. We are lucky to live in the music capitol of the southern-hemisphere here in Melbourne, and the gigs are great. We would love to play overseas and it’s something we’re looking into.