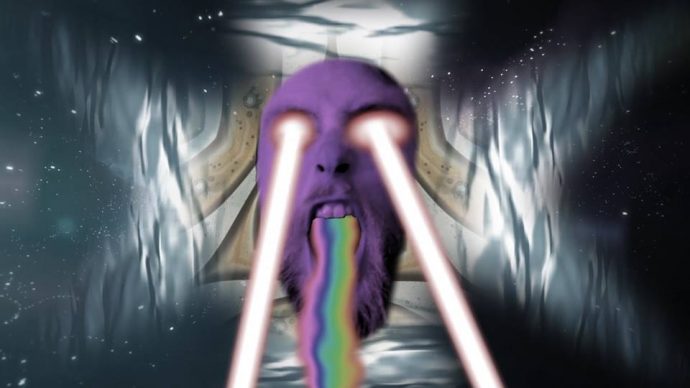 (Austin Weber brings us another premiere, this time a video for a song from the new album by Michel Anoia.)

Way back in the early days of 2016, our esteemed editor Islander premiered a song called “Two Mountains” by the mind-boggling metal force from Lyon, France known as Michel Anoia. As he often does, he then tipped me off to the group, figuring it’d be right up my alley. He couldn’t have been more correct, as their new album Plethora has become one of my all-time favorite albums for the entire year. Now, as usual, things somehow strangely have come full circle as we unleash an exclusive music video premiere for one of  the songs on Plethora  called “La Terreur d’Exister”.

If you missed the premiere that Islander did, and are new to the group, Michel Anoia expertly mix-and-match death metal, mathcore, grindcore, black metal, and more into a myriad of stupefying sonic creations — all of which are on display in today’s music video for “La Terreur d’Exister”, accompanied by a lethal dose of their clearly zany sense of humor, given the bizarre and hilarious visuals that accompany the music. And by the way, this is a video which the band shot, edited, and created entirely by themselves, proving once again that the DIY ethos continues to thrive in an ever-harsher music ecosystem.

If you dig the music and the video for ““La Terreur d’Exister” and want to hear more, be sure to check out all of Plethora through the Bandcamp link provided below. I’ve been told that new music may be coming from Michel Anoia as soon as next year, so be sure to keep an eye on this group to do even greater things in the near future.