(KevinP returns to NCS with a new episode of his short-interview series, and this time talks with Achilleas Kalantzis, guitarist of the mind-bending Greek black metal band Aenaon — whose new album Hypnosophy was released late last year — as well as Katavasia and Varathron.)

K: You’ve had some lineup changes for Hypnosophy. What was the impetus and did this affect the sound/direction of the new material?

A: Indeed. Unfortunately it was really hard for Thyragon (bass) to keep up with the band’s schedule and Anax (guitars) had to join the obligatory army service, so we recorded without him (he is still a member now though). On the other hand Orestis was already playing the Sax for us since Extance, so becoming a permanent member wasn’t a big change. Astrous (vocals) and I are usually building the first demos of the songs, so the core of the creational process was the same (no matter the final arrangements). What made a big difference to me was that I also composed and performed the bass guitar. That gave me as a composer the ability to use it in a more prominent way, leading to groovier arrangements. 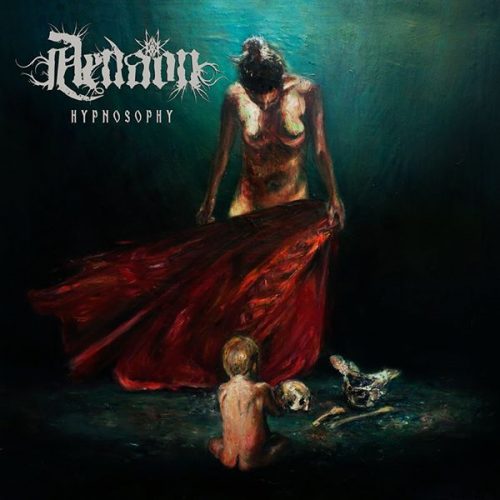 K: The first thing that jumped out at me while listening to Hypnosophy was the production values. It was much cleaner than the prior album (Extance). Was this a conscious decision?

A: We wanted to try a different, less black metal approach with Hypnosophy. I turned down the guitars and gave much more room to the rhythm section and lead instruments. Sax, percussions, experimental elements, and of course vocals — we finally had more space for all of them by just turning the guitars down. We sacrificed a little aggressiveness that way but I think this is the sound that fits these tracks best.

K: Vocally you went in a slightly different direction for the clean parts.

A: I’d say that Astrous tried a different approach arranging the vocals in general. Even his growls are much more theatrical and paranoid. In a way it feels like a dark rock opera to me.

As for the clean parts, we used to do all of them ourselves but this time we had to call a professional since we couldn’t really sing decently with what Astrous had in mind. George Papagiannakis took over all the clean parts on the album. Hence it’s obvious that he gave a direction of his own too. 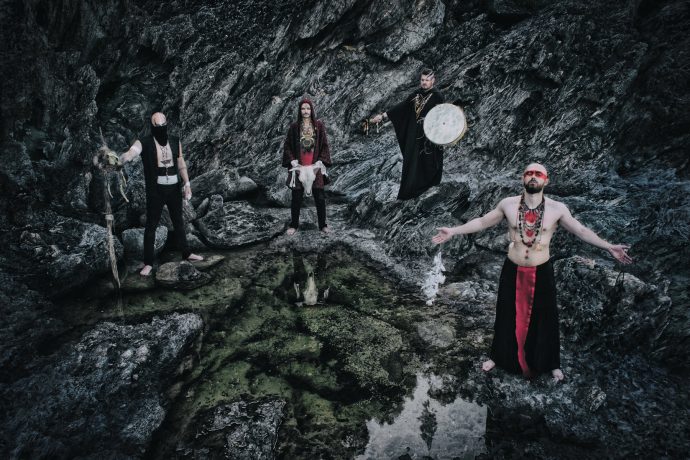 K: From the promo photo, you’ve also gone in a more theatrical direction too.

A: Since Hypnosophy is all about surrealism, the dream world and its various interpretations, we wanted to include such elements in the photoshoot, and for that we had Evi Savva, our photographer, to help us out. The sea symbolizes the subconscious mind, and everything around it represents images of dreams. An imposing warrior figure, as for someone who tries to conquer in their dreams. A shaman figure, for the spiritual meaning that someone uses to explain them. A mystic figure with a distinctive spiral shape on his head, as the way things slowly reveal themselves through constant change. A dramatic dark figure holding a drum, as for the dark corners of our existence that we often come across in our dreams, confirming to us that they are always there. The skulls are the reminder that nothing is forever. But to be honest, goat skulls are just a cliche that as a black metal band we couldn’t skip.

K: So in terms of live shows, what do you have planned?

A: We are currently dead with a chance of reviving (at some point). As you might know, the Greek reality at the moment is kinda harsh and we all live in different cities, making it even harder to survive as a live band. We have our eyes open for opportunities and waiting for a good chance to form a live line-up again when it’s really worth it.

One Response to “GET TO THE POINT: ACHILLEAS KALANTZIS (AENAON, KATAVASIA, VARATHRON)”