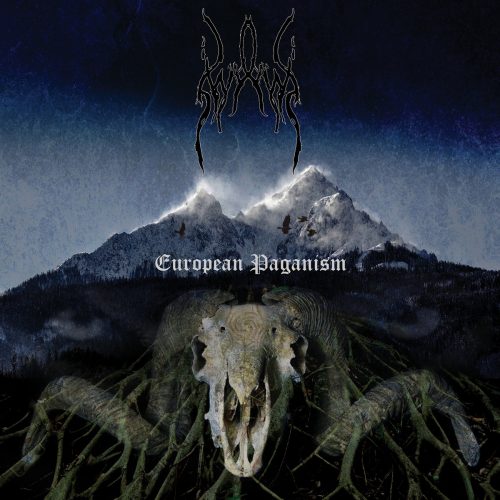 I would guess that most of us have favorite metal labels whose releases we check out, and maybe even buy, automatically. We’ve figured out over time that certain labels tend to sign quality bands whose music lines up well with our own tastes. Especially over the last year, and for precisely that reason, I’ve gotten into the habit of reflexively checking out new releases by Russia’s Satanath Records and its Belarusian affiliate, Symbol of Domination (e-mail alerts from Bandcamp make that easy). And so when I got a Bandcamp alert about two weeks ago concerning a new Satanath release by the UK’s Nordland, I visited the page without delay — and it wasn’t long before I included the song I found there in an NCS feature on new music.

That song, “Rites of Dawn”, is one of three on a Nordland album named European Paganism, which Satanath will be co-releasing with More Hate Productions on March 25. I’m happy to tell you that we’ve now been given the opportunity to premiere a second song from the album, “A Burning of Idols“.

Yesterday my friend Andy Synn introduced one of his reviews with some observations about the phenomenon of one-man black metal bands. He pointed out that “the relative ease with which anyone can put together their own ‘one-man Black Metal band’ has led to a glut of mediocre albums and EPs which do little more than recycle the same old sounds and the same old stories,” while also acknowledging that “there are some truly phenomenal examples out there of solitary artists who possess the necessary vision and distinctive voice to stand out from the pack”. Nordland is one of those phenomenal examples.

Like “Rites of Dawn”, “A Burning of Idols” reveals a distinctive voice. Nordland‘s creator Vorh has succeeded in maintaining connections to some of black metal’s most revered (and most copied) traditions, while also embellishing and changing the methods of expression in ways that stand out from the pack.

More in spirit than in in the precise configuration of the sounds, these songs bring to mind the kind of primal energy and mythic atmosphere that Bathory introduced on the trio of albums that began with Hammerheart. “A Burning of Idols” includes some absolutely gripping riffs,  as well as an overarching atmosphere of unreality — a sense of pageantry and ancient grandeur as well as violence and loss.

But the music is so complex, so intricate, and so kaleidoscopic in its changes that it also merits adjectives like “progressive” and “avant garde”.  Vorh is quite adept at creating electrifying savagery, not only through his ferocious snarls and demonic proclamations but also with bursts of seething riffs, blasting drums, and unsettling dissonance. The reek of sulphur and acid is in the air, and at times there’s also an air of delirium, as if we’re hearing the eruption of asylum inmates who’ve turned the tables on their keepers.

Yet the drum rhythms and patterns are in constant flux, and the prominent bass accompaniment is equally vibrant and mercurial.  And when you least expect it, a somber and completely enthralling guitar melody surfaces and begins to flow like liquid through the blood-pumping tumult (it happens first at about the 3:00 mark, and again later).

As my comrade Andy also pointed out in yesterday’s review, one-man black metal bands do provide the opportunity for realizing a singular creative vision, since there is no need to balance the writing process among competing ideas. That’s obviously no guarantee of quality, but when imagination, spirit, performance skill, and powerful production come together, you can get something remarkable — something like what we’re hearing on European Paganism.

Although European Paganism includes only three songs, it is indeed an album-length work — the third song is more than 20 minutes long, and I can’t wait to hear it.

European Paganism will be released in a jewelbox CD edition limited to 500 copies, as well as digitally. To order, visit this location:

2 Responses to “AN NCS PREMIERE: NORDLAND — “A BURNING OF IDOLS””