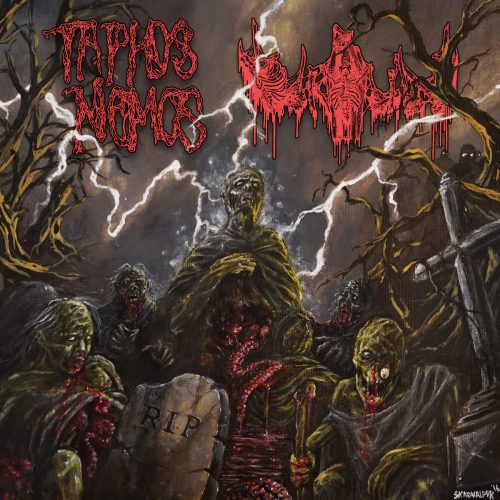 March 24th is the date set for the release of a stupendous album-length split by Pittsburgh’s Taphos Nomos and Urðun from Akureyri, Iceland, and we have a full stream of it today that you definitely need to hear. The name of the split is R.I.P.  — which doesn’t mean what you think it does.

The Taphos Nomos side of the split, which consists of three new songs, bears the title Rarely Investigated Phenomena, while Urðun deliver four new tracks of their own plus a cover of Autopsy’s “Charred Remains” under the title Rigorously Intensified Putrefaction. A few thoughts about each side follow, so you have a bit of advance warning about what you’re getting yourselves into. 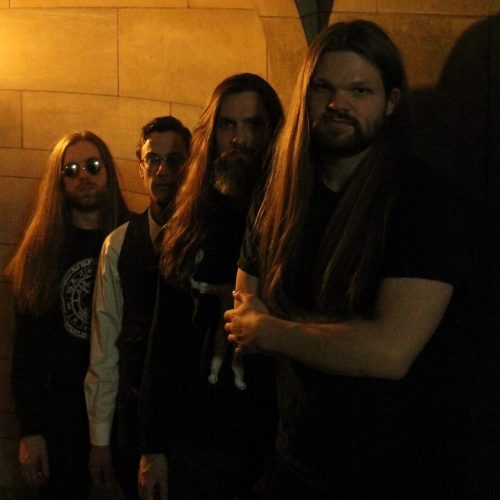 It didn’t take Taphos Nomos long to make their mark. They did that immediately with a fascinating debut EP in 2015 named West of Everything Lies Death (reviewed here at our putrid site). They followed that with two demos, The Cottonwoods Grim and Marsch MMXVI Rehearsal, which included early versions of two of the tracks on this new split. But as good as all that music was, Taphos Nomos have taken their game to a new level on this split.

The music in these three songs is definitely morbid and horrific death metal, but as brutal, as deranged, and as vicious as it is, the music is also mind-bending, with a degree of complexity, unpredictability, and technical proficiency that keeps the listener rooted in place. In part because it’s so intricate and so well off the usual beaten paths, it’s also the kind of music you want to listen to repeatedly — not just for the adrenaline rush but so you also have a better chance of deciphering what the hell you just heard.

The music oozes sickness and decay; it erupts in cyclones of pulse-pounding destruction; it punches like a big nail-gun and eviscerates like a swarm of carnivorous hornets. It groans, shrieks, gallops, and marches you to an early grave. Fittingly, the vocals are gargantuan, horrifying roars — but they change as well.

The interplay between the fascinating and inventive drum progressions and rhythms and the frequently deranged riffs and arpeggios is one of the great strengths of these songs, and the band add lots of other accents that make them even more interesting, including the berserker solos in the first two tracks; the slow, hallucinatory vocal melody that wails like a phantasm over the tornado of destruction in “Autocannibalism…”; and the switch from skull-splitting riff jabs to blazing thrash derangement in “Lightning Stroke…” The acoustic guitar intro in that last track is also a nice touch, if only because it lets you catch your breath before the next onslaught of mind-bending bestiality. 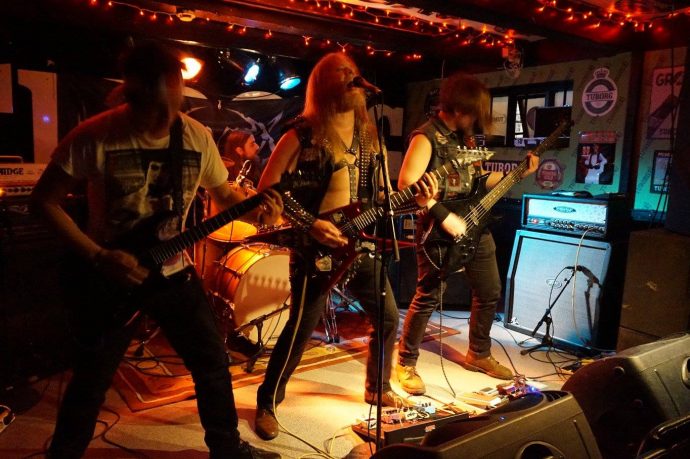 This Icelandic band made their debut with a 2015 EP named Horror and Gore, and R.I.P. marks their second release overall. But although the band is still a relatively young project, these monsters sound like they’ve been doing this kind of thing for decades.

And by “thing”, I mean a completely horrid, festering, and utterly electrifying brand of gore-soaked, paranormal death metal. It’s the kind of music that makes me think of Obi-Wan Kebobi’s introduction to the Mos Eiseley spaceport: “You will never find a more wretched hive of scum and villainy”.

The three original songs on Urðun’s side of the split are utterly decimating and thoroughly explosive in their full-throttle impact. Whether the music is galloping in a punk-fueled romp, cutting wide swathes of threshing mayhem, lumbering and rumbling like a tank attack, or beating the listener senseless with skull-cracking chug-athons, the band keep the adrenaline spigots wide open — except when they start sucking the air out of your lungs.

Yes, Urðun do have an equally terrifying ability to bring a ghastly form of doom to the table. In the final minute of “Tortured To the Grave” and in the first section of “Grafir & Bein” they slow to a dismal crawl leaving a slimy trail of pus and congealing blood in their wake, accompanied by gruesome regurgitative vocals (actually, the vocals are gruesome and regurgitative at all times).

There’s some hellishly good soloing in these songs, too, one of which goes off like a freakish fireworks display in “Immense Rot” and another of which (in “Wrath of the Zombies”) is surprisingly fluid, soulful, and melancholy.

The band do a hell of a job with the Autopsy cover, too — reaching new heights of maniacal, berserker frenzy and doing their damnedest to thrash and clobber the life out of the listener before one final nauseating trudge into the grave.

R.I.P. will be released in a limited edition (200 copies) of All Pro cassette tapes by Caligari Records on March 24. To pre-order this split on tape, go here:

The split will also be released on CD by Blood Harvest Records and on vinyl by Our Ancient Future.