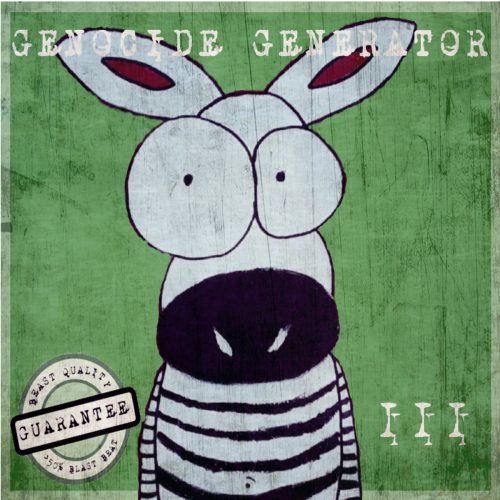 (DGR turns in this review of the new album by Bavarian grind merchants Genocide Generator.)

This one took a bit to review. Not because there was some conflict or confusion as to how Genocide Generator did things, but mostly because III is an album that does almost exactly what I was hoping the band would do after their debut album I — you’ll note, there’s no II yet — which was to double-down on all of the elements they had used to make their first disc.

I was hoping they would double-down on the speed, on the grind, on the usage of electronics, and on the heaping helping of just outright absurdity that they splattered over the top of everything. And that’s what they did on III. So if you can remember way back to the olden horse-cart days of the internets and our review of I, and if you enjoyed that, then III is perfect for you. What took a while with III, though, is that since the self-described “grindustrial madness” band doubled down on everything, it’s hard to pontificate about much with the disc. And it also raises a few interesting questions.

One question is that since the band have so much fun inserting dumb sound effects and cranking on random electronic noise to go along with the high-speed adrenaline rush that is their music, how does one possibly review grind like that? How does one talk about grind that takes on an almost carnival-like atmosphere with its big-top bombast and the joy of how anarchic some of the songs become? How do you review an album of grind that sounds like it was made for a funhouse? 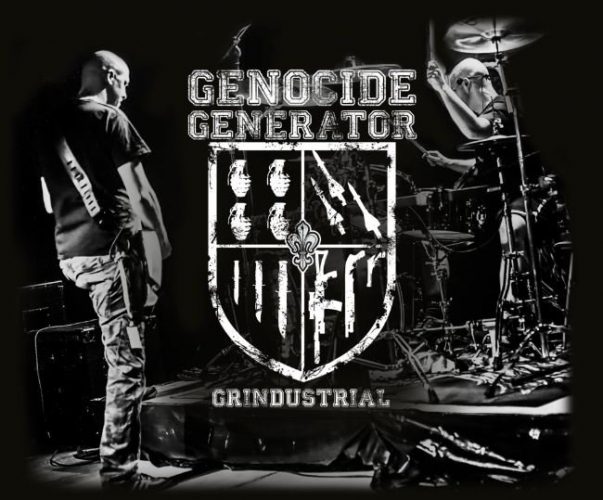 The fun part about dealing with Genocide Generator reviews is that the band keep the stupid at maximum levels at all times, resulting in such joy as the names for each song on their discs being a series of numbers — completely out of order with the actual track listing. You get the wonder of songs like 12, 21, 16, 22, 24, and 18 on III, and it’s difficult as hell to keep track of which one you’re actually on.

In one sense that makes Genocide Generator the ultimate shuffle band because it kind of doesn’t matter where each song appears on their album — what happens within is what does, and most of the time it’s a fast-tempo, hellfire-sounding grind with someone cranking all sorts of effects into it to make the ultimate collage of noise.

On III they take all of those elements and turn them up, aiming to make it look like child’s play. There’s all sorts of silliness tucked in between each track as they move from one fiery blast to the next. One of the songs even contains a blastbeat segment whose only accompaniment is a phone’s busy signal. The only melody in opening song 12 comes from a screeching electronic sample that seems to jump back and forth on its differing frequencies in order to drive every animal in your house mad. Even if that doesn’t work, maybe they prefer super-low frequencies, like the constantly barked-out low growls that punctuate each and every song.

The twelve tracks comprising III take up a little under twenty minutes of your time, meaning that the insanity happens over and over again. Album closer 22 is only a minute and nine seconds long and manages to be one of the more ‘brutally heavy’ songs on the disc. Not every track has a bevy of electronic samples to give Genocide Generator the industrial branch of their chosen genre; some of the songs are traditionally grindy, just some very fast tracks, cranked out on top of each other with no motifs or movements, just a reason to growl and rail on the instruments for a minute or so.

Really, the fact that Genocide Generator get up to the goofy track-naming means you can spin this thing mixed up, or let it run from front to back, because in reality the music will be delivered breathlessly to you anyway. There’s no slow parts, so to speak. If anything, the descriptor the band put on their Bandcamp page of what comprises the album may better provide a picture as to what you may be in for, when they give the list of ‘ingredients’ involved in the ghoulash that is III: “50%+ Blastbeats, rest strictly doublebass and D/skank-beat.” If only it fit together that neatly. Genocide Generator get a lot of fun out of mutating something that sounds so simple.

Much like its predecessor I, III remains one hell of a blast to listen to, though. Its elements are recognizable but the fact that Genocide Generator subvert it by goofing off around the edges makes III still worth listening to. It’s been some time since I anyway, about four years in fact, and spinning the two one after the other can show that this is still fairly heavy music. Despite the circus-atmosphere, there are no horns here. It’s just that Genocide Generator know they’re making meatheaded music meant to make people pit and commit violence against each other.

They use their electronics and samples to inflict pain, on top of the occasional goofing off, and III remains heavy throughout because of it. It’s never really integral to the experience, as the blastbeat drumming and guitar work underneath do more than their fair share to crank out the heat and get things moving, but they do amplify all the madness within.

Genocide Generator play the role of the mad scientists of grind pretty well, taking songs that could stand in their own right, then bending them and breaking them as much as possible, which means that a listen session is a twenty-minute vortex of sound. It does exactly what a follow-up disc should do. The band found everything that worked on its predecessor and then doubled down on it, then mutated that just enough to keep things interesting. III is a fun time, and one that doesn’t ask too much of yours.