In 2015, Seer from Vancouver, British Columbia, made their first mark on the musical landscape with an EP entitled Vol. 1 and followed that in 2016 with a second EP, Vol. 2. That same year, Art of Propaganda released a compilation (Vol. 1 & 2) that combined both EPs. And now Art of Propaganda is preparing to release Seer‘s first full-length album, a 45-minute monolith called Vol. III & IV: Cult of the Void.

Earlier this year we introduced a surreal music video for an album track named “They Used Dark Forces“, and today we bring you another track named “Acid Sweat” in advance of the album’s July 7th release date. 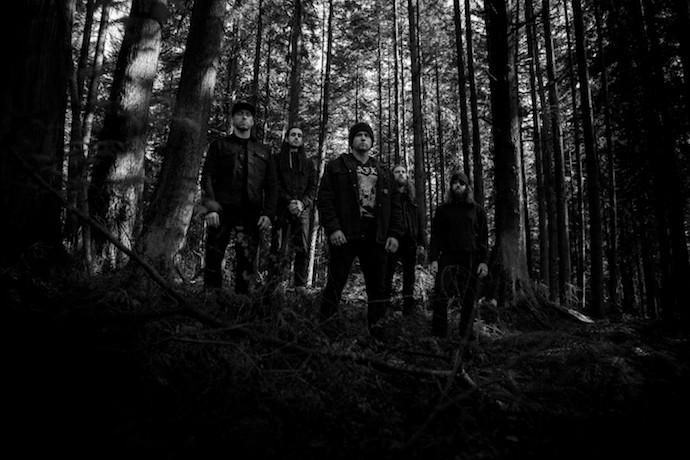 Seer‘s choice of titles for their releases reflects the evolving narrative concept that runs through the lyrics of their material, just as the band’s name meshes with the mystical nature of their music; it calls the mind to venture beyond the bounds of what we can see and touch around us, just as its narrative arc crosses limitless primordial landscapes and moves into celestial realms, while the sanity of its protagonists is tested to the breaking point.

As signified by its title, the new album is in the nature of a two-part offering, with some distinct differences in sound and strategy manifested in the last four, mellower songs on the album as compared to the first four. In “They Used Dark Forces“, which is among the first group of four, Seer entwine elements of sludge, doom, and stoner metal with an occult, fantastical atmosphere, using craggy, rumbling riffs and thick, coiling guitar leads mixed with eerie strands of melody, throaty roars, and fierce yells to build an aura of approaching doom — which grows even darker as the pace slows and the rhythms hammer with cold, brute force.

The path of the music in that track is one of ever-increasing intensity. As its velocity increases, so does its destructive power; the vocals become soaring wails, and then ominous spoken words and agonized cries, with the music twisting into nightmare shapes — and then the band proceed to stomp the listener’s head with cataclysmic force. The final two-and-a-half minutes of the song, which appear on a Bandcamp stream of the track but are not included in the video we premiered, are a hint of what comes in the album’s second half.

“Acid Sweat” is also in the first group of four tracks on the album, and it’s a big, bruising rocker that rumbles and rolls from the first moments. Featuring a tandem of clean and harsh vocals, the song has pavement-cracking destructive power, but the titanic, ropey riffs and bludgeoning rhythms have body-moving power too. It’s an acid bath of caustic fury and a punishing dose of pile-driving grooves, but there are filaments of memorable melody in the music as well.

Cult of the Void features cover art by Waguna Wiryawan. It was recorded and mixed by Stuart McKillop at Rain City Recorders in Vancouver, BC; engineered by Mark Mckitrick and Mark Lingelbach; and mastered by James Plotkin at Plotkinworks in Bethlehem, PA. The album will be released by Art of Propaganda on July 7th. Watch these spaces for pre-order info:

In addition to our premiere of “Acid Sweat“, we’ve included the band’s video for “They Used Dark Forces” and the full track of that song which is available on Bandcamp.