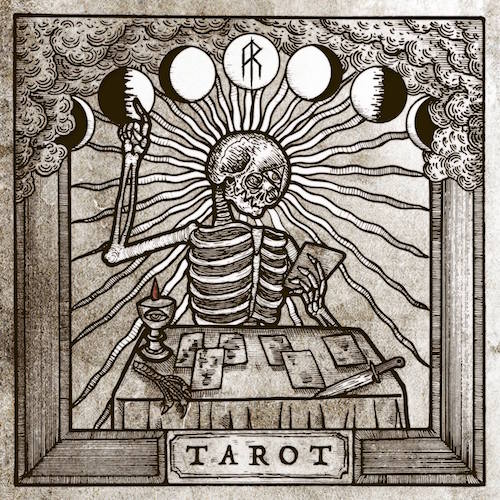 (DGR reviews the new album by North Carolina’s Æther Realm., which will be released tomorrow.)

An almost four-year gap between albums isn’t too unheard of these days. Metal, when it wants to, moves at a glacial pace, and as much as we love to assume everyone runs on the two-year cycle, there are always going to be a bunch of outliers. Æther Realm are one such band, with the gap between their debut album One Chosen By The Gods and the group’s soon-to-be-released sophomore disc Tarot being close to four years — though the band themselves have alleviated that a bit with a very healthy bit of touring, show playing, and a slow drip of singles that has actually made the time seem to disappear faster than one would think.

A sophomore disc can represent a huge shift for a band, especially one like Æther Realm, who had a very succesful first disc — one that really did prove the concept behind the band in one go and contained a healthy grasp of really catchy songs. For a band that at one point jokingly had as part of their online bio “We are not from Finland”, it certainly wasn’t hard to draw conclusions as to which groups the Æther Realm crew really, really loved and drew a ton of inspiration from. A second album of the same style, though, no matter how good the band might do it, becomes a harder sell, and with Tarot it seems like even Æther Realm recognized that. 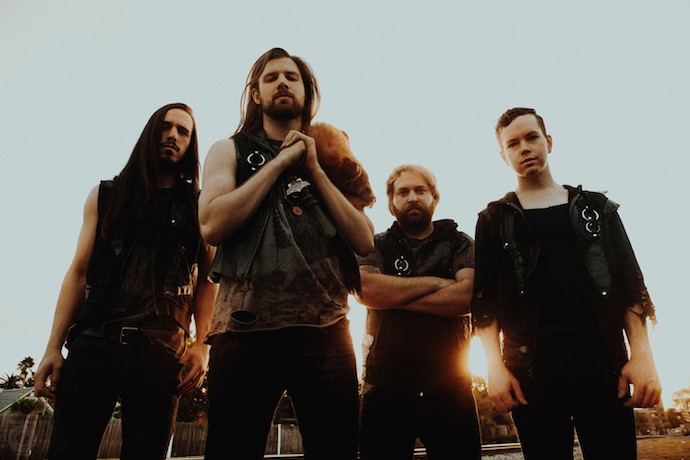 Tarot is a disc on a mission, with loftier ambitions and a variety of different genre styles, still one foot firmly planted in the folk/melo-death scene, but expanding what the band were doing with the more grandiose songs on One Chosen By The Gods, as well as differentiating the band from the initial blast of idol worship that had gotten them so far.

Tarot is a big album, clocking in at more than an hour’s worth of music and with multiple songs leaping into the five-to-eight-minute range. Its opening song is five seconds short of eight minutes and its last song is almost twenty, placing the band firmly in Persefone Aathma territory in terms of using twenty-minute suites of music to close an album out.

Every song on Tarot is named after one of the tarot cards and musically tries to match up with them thematically. It makes sense that a song named after the King Of Cups becomes your folksy, hurdy-gurdy-driven, drinking song, and Æther Realm play that up to full effect. Death actually winds up being the anthemic ballad-esque song out of the grouping, with the rest of the tracks on Tarot favoring a harder-driven and faster melo-death approach.

The Devil, for example, is one of the eight-minute-plus tracks, and the thing opens sounding like a symphonic death metal track. It remains one of the heavier songs on Tarot throughout its whole runtime, with a briefly clean-sung chorus that sails atop a bevy of blastbeats, fitting for its name and as it follows the much bouncier and friendlier song The Chariot. The Devil is one of the highlight songs of Tarot for sure, and one of a handful on the album that are so dynamic that they make almost nine minutes feel like the blink of an eye.

Even though it has been floating around the web for a while now, The Chariot remains a catchy and bouncy jaunt through the Æther Realm forest of heavy metal. Other than King Of Cups, The Chariot is one of the most sing-song-ey tracks on Tarot — it remains largely unchanged from its earlier release — and it comes between fairly hefty blasts of heavier metal in the tracklisting.

Tarot as a whole is a more traditionally heavy-feeling disc than One Chosen By The Gods. It still relies immensely on a ton of outside instrumentation and keyboard work, but Æther Realm spend a lot of Tarot trying to dodge the more immediate comparisons to the folk metal/melodeath scene that cropped up in Finland in the early-aughts from which they drew a lot of initial inspiration. While they aren’t breaking down genre barriers on Tarot, at the very least Æther Realm are really swinging for the fences with just how dense a lot of these songs are; and so the occasional good ole-fashioned power-chorus-driven, almost pop, sing-a-long like The Chariot cropping up halfway through the album feels just right.

The Tower and The Emperor are the only sub-three-minute tracks (and even so, just barely). The rest of the disc is packed to the gills. The Tower is almost a Clayman-era In Flames song (a bit of world traveling, too, given the aforementioned joking on the band’s part claiming not to be from Finland) in its reliance on a guitar-lead-driven melody and its two-step rhythm driving the song like that group did on its release. At times they do a better job of sounding like a modern-era version of In Flames than the latter have given a shit about doing in recent years.

For an album that feels like a journey in its own right, closing with one final journey on The Sun, The Moon, The Star is a lofty move. Clearly not satisfied with how much they had already packed into the disc — which feels well-worth the purchase even by song seven — Æther Realm throw in a nineteen-minute-plus closer that covers multiple forms, 8-bit intro included.

The Sun, The Moon, The Star starts out as an epic campfire story before quickly moving into more familiar territory, probably the closest the band get to sounding exactly like they did on previous releases, showing that they can’t quite swear off the keyboard pyrotechnics just yet. The song moves at high speed in its opening minutes, too, the soundtrack to a battle of its own. In fact, the big shifts for the song come during the guitar solo segments, as the ending of each one feels like a different movement of the track. The bass-guitar-driven changeover in the middle of the song begets the surfacing of a much more evil presence, and a change happens again during the clean break in the end as the song finally changes over into The Star form. 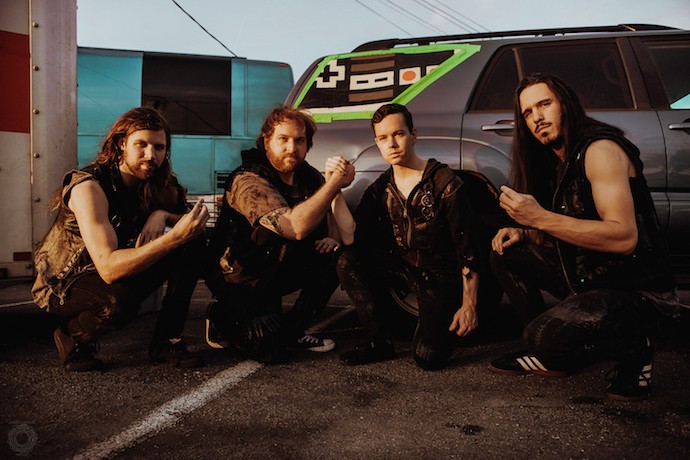 The distance between Æther Realm‘s two full-length releases may have been a time-consuming trip, but it is time that the group have clearly taken advantage of, forging and smithing each of Tarot’s songs into battle-worthy weapons. The band have leaped past the initial fascination of a group out of North Carolina being able to create so well a sound that we usually associate with Scandinavian regions, vaulting into an area where they’ve been able to mature their sound enough that Æther Realm have really now become their own thing.

Yes, the band still have their moments of standing on the shoulders of giants, but Tarot is such an ambitious disc, so full of music and sweeping, massive moments that you can’t help but want to get wrapped up within it. There’s also a huge sense of discovery upon repeated listens to Tarot — in addition to the album being a good slab of folksier melodeath, you want to dive into it over and over again. Tarot is an enormous accomplishment for the Æther Realm crew and one that has been well worth the wait.