The politically charged Serbian band Nadimac have been explosively venting their brand of crossover-thrash since 2003, with a discography that now includes about 25 releases, including four albums. Last year they signed to Spain’s Xtreem Music for the release of a fifth one, which will be upon us early next month. Entitled Besnilo, the album is a 14-track attack with lyrics and song titles in the band’s native language. It will be discharged on July 3rd, and to help pave the way, we have the premiere of a song named “Kapitalizam je Kanibalizam” (Capitalism is Cannibalism).

I first came across Nadimac at the time of their last album release, a full-length “so goddamn full of energy, so loaded with high-octane riffs and turbocharged drumming, so infectiously groovy and inventive, that I found it irresistible”. I can say the same of Besnilo, and of the individual song you’re about to hear. 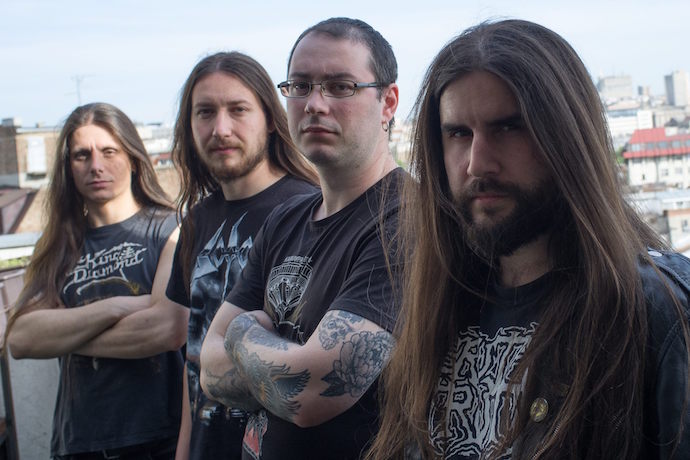 Although “Kapitalizam je Kanibalizam” begins in a lumbering, stalking pace (punctured by flurries of drum weaponry and guitar derangement), it soon leaps from the grave like a racing, ripping thrash monster. The vocals in particular are loads of furious fun, a blend of gruff roaring and skin-splitting yells, both on the brink of mayhem, and they give this blast a fist-swinging punk spirit to go along with the heavyweight punch of the riffs and the rhythm section’s bruising attack.

Actually, the whole song seems like it’s about to come apart at the seams. It’s catchy as hell, and as mean as a splinter in the ass — highly contagious, highly energetic, the kind of music that makes you want to run around in a circle looking for someone to bounce off of. You’re really not going to want to turn back to anything remotely boring after you hear this; doing that would be like surviving a car wreck that pitches you through the windshield and deciding it would be a good time to finish your tax return.

Here’s the full track list, with English translations. Pre-order info for the album is below, along with our premiere AND a stream of a previously released single, “Jednom Nogom u Gradu”.