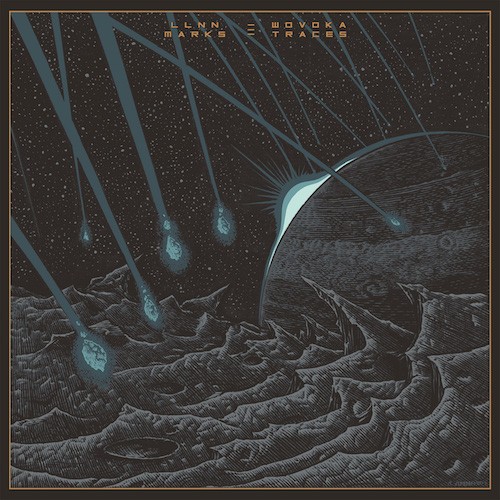 The album’s advance press contains this advice: “Fans of Cult Of Luna, Neurosis, Amen Ra, Rosetta, and ISIS pay heed”. And that’s good advice, but we have a few more introductory thoughts about the music as well. 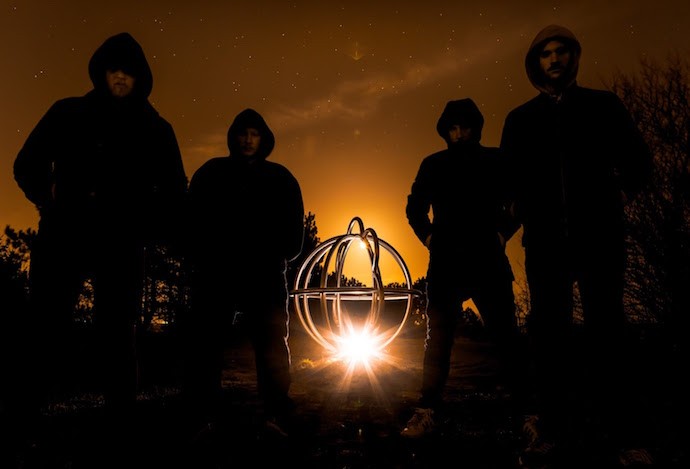 I kick myself on a weekly basis for failing to review albums that have caught me in a vice-like grip. I kicked myself extra hard for failing to write about LLNN’s stunning debut album Loss, which Pelagic released last year. I’m fortunate that I have the chance to (somewhat) make amends here:  If you haven’t heard Loss, do remedy that oversight as soon as you can!

The six tracks by LLNN on the Marks side of this split, which span about 20 minutes, were written and partially self-released before that album, but they also strike with stunning power. “The Guardian” opens LLNN’s side, and sets the template for much of what’s to come. LLNN’s tracks are speckled with cold, spooky ambient textures, both haunting and cosmic, and you get a taste of that from the very beginning. And then the pounding begins, along with a grim but almost anthemic fanfare of a melody.

The song becomes an exercise in ratcheting tension and venting pain. The extremity of the vocals is itself painfully intense — a larynx-lacerating, jugular-rupturing, blood-spraying expression of torment and fury. And the tension builds as the guitar leads twist the knot around your neck and your mind against a backdrop of abrasion and pavement-splitting percussive force. The tension never relents, but spills over into a kind of swarming frenzy.

This combination of frigid, space-borne ambience, explosive vocal vehemence, tension-ratcheting guitar work with a spectral sheen, and cataclysmic rhythms, form the core of the rest of the tracks, too, and the result is 20 minutes of pitch-black atmosphere and skull-splintering drive, with the final track (“Gravitated”) devoted entirely to an ominous combination of chilling, void-faring ambience (including a sound resembling ghostly choral voices) and a deep, pulsating drone with a grim, ritualistic aura.

One final word of emphasis: In these tracks LLNN regularly pound the listener in staggering fashion. When they sync up all the instruments on the downbeats, it’s stupefyingly heavy. Take another look at that rain of meteors on the cover.

Like LLNN, Wovoka had an extremely impressive debut with their full-length Saros in 2015, from which we had the privilege of premiering a powerful track named “Chosen”. Their side of this split — “Traces” — consists of a single 18-minute-long symphony of peril and pain that’s completely enthralling and more than lives up to the band’s striking debut.

“Traces” is a slow build, one that picks up where LLNN left off, with moments of cold cosmic drift and isolated guitar notes that sound desolate and depressive. LLNN can pound like a skyscraper-sized pile-driver, and so can Wovoka, and you get a taste of that soon enough with the abrasive crash of conjoined chords, booming drums, and gravel-chewing bass.

A melodic chord progression comes in, screwing itself into the listener’s head through repetition, with a resonance that’s dramatic, doomed, and simmering with incipient derangement, coupled with wrenching howls from Wovoka’s vocalist.

As you might expect from a song of this length, the intensity ebbs and flows, but the tension in the music rarely relents. It gets a vice grip on your neck and bends it to its will, periodically locking into potent, spine-shaking rhythms that get your whole torso moving. The drums rumble and tumble, the guitars clang and hammer, the vocalist reaches even greater heights of maddened agony and rage. Against the backdrop of one of these assaults, a squalling, slithering, hallucinatory guitar lead enters the frame, intensifying the music’s harrowing impact.

And on the other hand, there are also subsidences, the music opening up into vast, barren spaces. A long bass solo leads into a compulsive rhythm that becomes the anchor point for the appearance of clean vocals, which themselves build from somber and subdued to high and searing. And that signals a final on-rush of fierce energy and merciless pummeling, the guitars building again to a tense sandstorm of sound. As the final seconds of pulsating ambience arrive, you’ll wonder where the time went.

The cover art for Marks/Traces was created by Belgian artist Ammo. The vinyl version comes with a hand-numbered 5-color screen-print. There’s also a limited edition on brass and black wax, which looks like an impact crater. The album will be released by Pelagic Records on CD and digital, as well as the vinyl formats. Order via these links: