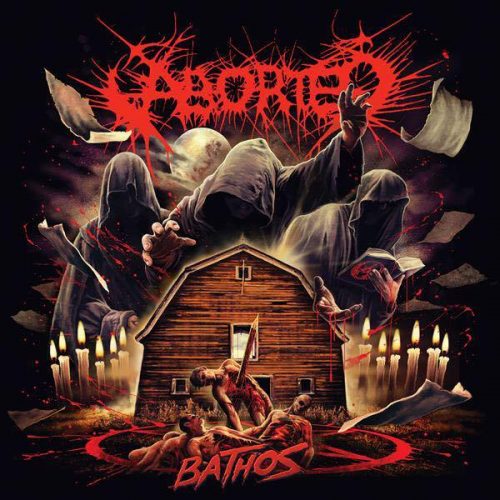 (DGR reviews the new EP by those Belgian barbarians (and old favorites of our site), Aborted.)

Of all of the bands nowadays who hardly seem to stop for a breath, Aborted are one who in recent years have steadily increased their output like few others. Most bands in the decade-plus eras of their careers tend to slow down; Aborted record music like the world is ending tomorrow — in terms of both aural quality and quantity.

In recent years, Aborted have also become master chameleons with their sound, re-energizing every album with just enough tweaks that although the band have clearly found a happy home in a hyperfast death-grind sound, each of the group’s releases since Global Flatline have felt different from one another. Those releases are still fairly recognizably as Aborted albums, and honestly, putting on shuffle the triptych of Global Flatline, Necrotic Manifesto, and Retrogore, along with the smattering of EPs and single releases with all their bonus rarities that happened in between those discs, pretty much guarantees a very consistent and frighteningly heavy through-line.

Another pretty consistent through-line for the Aborted crew, though, is lineup changes. A solid core remains, but it seems like every few discs someone politely bows out and somebody else steps in to keep the goremachine well-fed — and whilst correlation doesn’t equal causation, maybe that is how the Aborted guys have maintained such an insane output over their career of blegch-ing at people: new guy enters band, has ideas, the crew are able to forge and mutate enough of that material to bend it to the Aborted will, and thus, you wind up with a new release.

That’s probably the only way that I can understand how Aborted are returning with a new two-song vinyl release entitled Bathos, after putting out the four-song-plus-intro Termination Redux EP and the packed-to-the-gills Retrogore last year.

As mentioned above, Bathos is a two-song jam consisting of the four-minute-and-eighteen-second title track and the slightly shorter three minute-forty-four-second “Fallacious Crescendo”. Both songs provide an interesting look at where Aborted stand at the moment and where they may be traveling in the future, as a recurring theme for the smaller releases from this crew are that they’re a tad more experimental than the albums, given their snapshot nature, and often provide a hazy crystal ball preview of Aborted at that time.

In this case, it seems Aborted may be looking to veer a little more toward the chasms of the brutal death world, leaving a little bit of their honed-sword-edge sleekness behind in favor of atmosphere, at least where the title track is concerned.

Bathos marks the first recorded appearance of bassist Stefano Francescini as part of the war machine, and the first forty seconds of the EP make that abundantly clear, as the bass guitar makes itself very well known in the fray alongside some low-tuned, roiling guitars. “Bathos”, the song, is a more tech-death-oriented take on the Aborted formula, with a quickly picked-out series of notes at the end of each guitar segment, basically hammering to a close each riff repetition. It goes through a variety of moods, with its low and slow launch opening into the more familiar Aborted bits, and even an absolutely massive groove that pops up multiple times to help close out the song in its back half.

“Bathos” is still fairly rapid-fire, but it seems that the band are willing to let the song breathe a bit in between the staccatto all-out assaults that the band pepper throughout the song. It’s a large track, showing that Aborted are willing to throw their heft around, while still sticking to their deathgrind approach. It is the one of these two songs that shows what Aborted can do when they put some weight into their music. It’s a slight return to the death-oriented gazings of Aborted’s earlier work, carnage-obsessed and all.

“Fallacious Crescendo”, on the other hand, is much more familiar, able to slot in right next to the three albums that were mentioned above — less forward-looking and genre-shifting than “Bathos”, and more in the vein of Aborted cranking out a really fast grinder to wreck skulls for three minutes. It steadily scratches its way down the Aborted checklist during its run, basically serving as a focused steamroller for the whole song.

Relentless blasting drums power the music and will be instantly like comfort food for those who come to this band for the times when they’re in high gear. Basically, everything is at 1000mph from moment one, vocals included. That said, although the song is a more familiar take than “Bathos”, the band still play with their sound a bit, including some high and snarled vocals woven into the usual barked-out assault. They even manage to jam a good, apocalyptic world-ender of a groove section midway through the song, although in their usual fashion it is just as quickly wiped away by the very next swath of music — one sweeping motion, and a previous segment is annihilated in favor of more speed.

When Aborted are focused and not as spread-thin, the band are an unstoppable killing force. Bathos provides the opportunity for them to prove that again, twisting and changing form just enough to find new ways to keep the high-speed approach fresh. It’s still recognizably them, and in comparison to a disc like Retrogore, a little more technical, less manic, and a lot bigger-feeling.

What the future holds and how the band travel to their next disc will be interesting to watch. The song “Bathos” hints that they may be aiming to add a larger, more atmospheric death metal element to subtly enhance the the current hyperblast formula, but by that same token there are a couple of absolutely gigantic death metal drills and grooves that could leave a listener with whiplash. One thing is certain: Aborted remain the chameleon, changing color and form to hang with the current metal scene while remaining heavier than a large branch of it, and the music continues to be an armageddon-esque conquest that rarely leaves a listener room to breathe.

Bathos is out on vinyl now and will be released by Century Media digitally on July 7 and is available here.