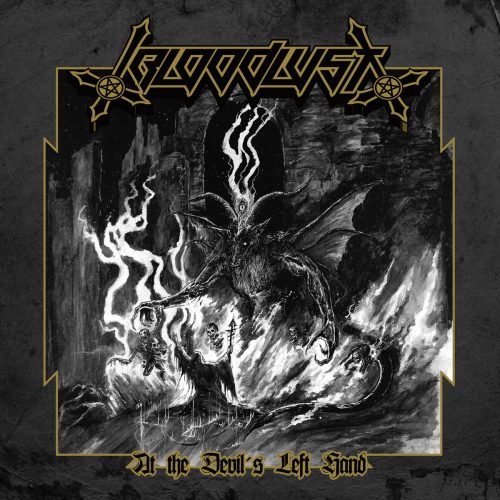 I remember nearly falling out of my chair (or more accurately being thrown out of it) when I heard the title track to Bloodlust’s new album in early June. It was a virally infectious, bestially ferocious, volcanically hot blast of blackened thrash, with the kind of riffs that seemed written to become instant classics, and the kind of soloing that seemed capable of turning lead ingots into slag. “At the Devil’s Left Hand” was the name of that track, and of course the name of this new second album as well.

Well, now we have the chance to bring you another track from that album in advance of its release by Caverna Abismal on August 24, and this one is called “Freak of the Night“. I thought it would be a heavy lift for Bloodlust to top the title track, but I do believe they have. 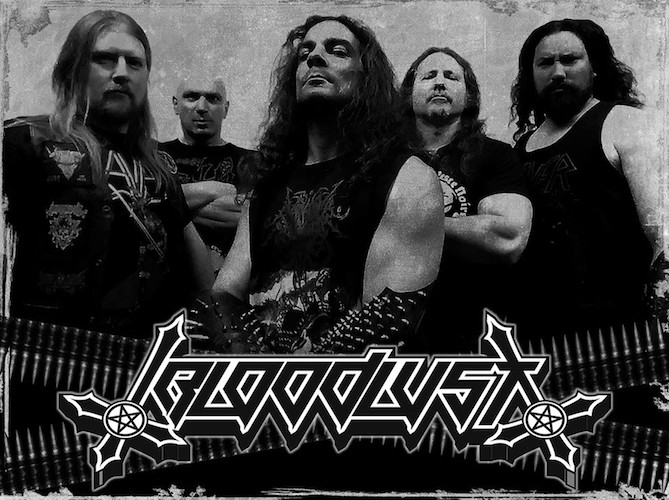 This new song displays many of the same qualities as the blood-rushing “At the Devils’ Left Hand”, but if anything it’s an even more eye-popping showcase for the band’s wide-ranging abilities. On the one hand, the song is another furious, turbocharged gallop, capable of shooting high-voltage electricity directly into the listener’s brain stem and battering the head with hyperspeed drum and bass work, while getting your head (and your whole body) moving to the primal energies of glorious riffs and molten soloing — which again have the feel of classic metal.

But on the other hand, “Freak of the Night” includes other ingredients as well, amplifying the magnetic pull of this Australian band’s boisterous and blasphemous excoriations. At the outset of the song, Bloodlust combine tumbling drumwork, twisted arpeggios, and big grim chords to create a sense of looming horror (something they do again, using different techniques, later in the song). And in addition to the throat-ripping evil of the dominant snarls and shrieks, this song also includes craggy, gut-deep growls (no less evil, to be sure) — as well as a sinuous, seductive melody (involving very cool guitar-and-bass interplay), punchy start-stop rhythms, and even more eye-popping displays of technical prowess.

I forgot to mention one more thing that hasn’t changed in comparison to the title track: “Freak of the Night” is ridiculously catchy. You’ll see.

Check out our premiere below, along with the album’s previously released title track, and check these links for more info:

Pre-orders will be available here:
http://www.cavernaabismal.com