After some carousing and late-night stargazing with friends, I slept like a dead man and wasn’t sure whether I’d write anything for NCS on this lazy morning. I had a few half-baked ideas that I was noodling over, and then I got word that Volume 5 of Crushing Intolerance had been released on Bandcamp. That wound up blowing the other ideas away like dust in the wind. 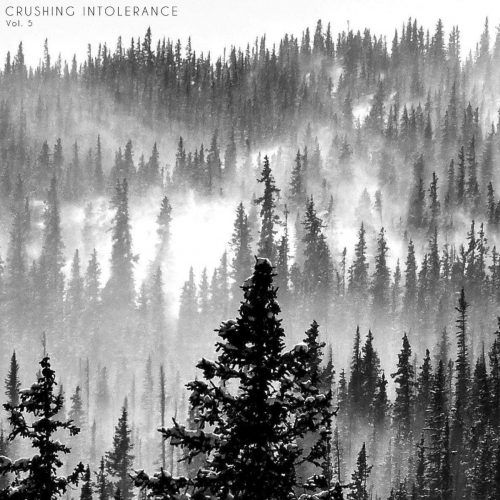 If you’re new to Crushing Intolerance, it’s a series of compilations organized by a group of kindred spirits under the name of Black Metal Alliance, whose goal is “promoting equal rights for all life”. The first volume was released in July 2014. All of them have been “name your own price” downloads, and the proceeds have all been donated to different charities.

The proceeds from Volume 5 will be donated to the Indigenous Environmental Network (www.ienearth.org), which is described on the Bandcamp page as “an organization established by grassroots indigenous peoples and individuals to address environmental and economic justice issues”.

I haven’t listened to all of the songs collected in Crushing Intolerance Volume 5, but what I’ve heard so far has made for a fascinating listening experience, and really a perfect way to spend this crisp August morning in the majestic presence of the Teton Range.

The compilation includes excellent previously released tracks that I’ve written about before on other occasions — including “Quiescent” by Kosmogyr (China/Czech Republic), “Spiritum Viridis” by Arkheron Thodol (Montana), and “Across the Nival Grove” by Mavradoxa (New York).

But it also includes some brand new songs, such as previously unreleased tracks by two projects whose past music I’ve thoroughly enjoyed — Deafest and VerminLord — and new tracks by bands I’m just now happily discovering — Scathed, Gudsforladt, and Shadow Lake.

I’m going to offer a few words about those 5 new songs, and also about a couple of other previously released songs by bands who are new to me — Funeral Art and Skeið. But I hasten to add (again) that I haven’t listened to everything on the comp. There may be other songs in here that are also brand new, and older songs that are as good as the other older ones I’ve heard before. What’s already clear based on the quality and variety of what I have listened to so far, however, is that all 21 songs are going to be worth exploring.

This Colorado-based one-man instrumental project (the alter ego of Chase Ambler) has become a personal favorite since I discovered his music in 2015 through the second volume of Crushing Intolerance (Chase has also been a driving force in bringing these compilations together).

“Krummholz” displays many of the dynamic qualities that have made Deafest’s music so enthralling — in this case, entrancing acoustic guitar performances, surging black metal power composed of deep vibrating riffs and booming, skull-shaking grooves, vibrant guitar melodies that are both melancholy and hard-rocking, and soaring panoramic ambient textures.

VERMINLORD: “Ancient Wisdom of the Forest”

As regular visitors to our site well know, I’ve been carefully following the releases of Seattle-based VerminLord (or Vermin Lord), beginning with the project’s excellent 2016 debut album Anguish, and I’ve written about almost all of his releases since then as well. Part of what has made VerminLord’s music so intriguing is its unpredictable blending of disparate musical influences.

This new song has an ominous, infernal atmosphere, with an almost theatrical level of bombast and an arcane mysticism in its sinister melodies. VerminLord has proven himself adept as a clean-singing vocalist, but here there’s nothing but his ear-abrading, strangled shrieks to go along with the perilous darkness of the music.

Now I’m turning to one of the bands on the comp whose music I hadn’t heard before now. The compilation doesn’t provide any background info about Scathed, but I’m pretty sure this band is based in Milwaukee, Wisconsin, and they’ve got a Bandcamp page (here) which includes a demo from a year ago.

“Despondent Cries” seems to be a new song, and it’s a great blend of heavy-hitting crust and hardcore — punishing, vehement, and electrifying — with elements of blasting black metal chaos in the mix. It romps and rampages, with a jugular-rupturing vocalist in the vanguard of the assault, but the deeper you go into the song, the more powerfully the melodies grip your head — and there’s an unexpected acoustic outro that (unexpectedly) doesn’t seem out of place at all.

GUDSFORLADT: “She who was the helmet maker’s once-beautiful wife”

Gudsforladt is another new name for me, a name which seems to be the Danish word for “godforsaken”. Metal-Archives says the band are based in Salem, Massachusetts, and their Facebook page reveals a thematic interest in Marxist-Leninist philosophy.

“She who was the helmet maker’s once-beautiful wife” is the kind of song title which suggested to me that it might have a source other than the band’s own imagination, and so it does. A google search reveals that it is the name of a sculpture created by Auguste Rodin between 1887 and 1890 (details here) and that it first appeared as one of the striking figures on the defining project of Rodin’s career, the pair of doors entitled The Gates of Hell.

The song is a new one, and apparently will appear on a forthcoming release this fall. It has a mesmerizing instrumental opening, beautiful but wistful; it seems to glide and shimmer like a sunlit stream, provoking remembrances of loss and longing. And then you hear the voice of a woman joyfully singing a folk melody, perhaps while working, and that’s followed by a heavenly piece of ambient music… as if we’ve been made privy to the ringing of the cosmos. Fascinating.

Funeral Art is the name of a Guatemalan band consisting of a man and a woman who use the names Lord Marbas and M. Bitia Kosemet. Their Facebook page indicates they are at work on a full-length album called Cuivië, and their Bandcamp page (here) includes more than a half-dozen previous releases, one of which is the song included on this comp, which was first released as a single.

The vibrant keyboard arpeggio that begins the song sounds almost like a harpsichord, and it’s soon joined by a woman’s soulful voice (singing a folk-influenced song in Spanish) which is equally attention-grabbing. And then things take a darker turn as a male vocalist’s bestial growls join in, and the music’s intensity grows and becomes increasingly frightening and violent.

The ambient music in the song gives it a mystical air, as if apparitions are swirling around your head, while the swell of thunder foretells an approaching catastrophe. I wish I knew Spanish well enough to understand the words sung and vehemently uttered throughout the song.

I can’t think of anything else I’ve heard that’s quite like this. It has a narrative quality, like the soundtrack to an exotic pageant, or like a musical play.

Skeið are a Denver band who from all outward trappings dedicate themselves to black metal barbarity. They released a self-titled demo in 2015 and a split with the Denver band Morgue Whore in January of this year. One of Skeið’s two tracks on that split is the song included in this new comp.

“Fear the Troll” does indeed have a raw, abrasive, utterly grim quality suggestive of cold, bloodthirsty barbarism. Yet in the song’s opening segment there is a kind of bleak and terrible majesty in the stately gait of the music and in its doom-stricken repeating melody… which persists until hell breaks loose in a storm of pounding and racing percussion and cyclonic riffing.

The crescendos in the song’s concluding section are downright cacophonous and catastrophic, soon followed by a moaning, dismal solo that itself grows increasingly fiery as the music erupts in one final paroxysm of violence. The vocals are vicious and wild throughout the song, but reach heights of unhinged, fiery ferocity that can put the hairs up on your neck.

The final song I’ll highlight here is a previously unreleased instrumental track named “Requiem” by Shadow Lake. It holds a special poignance because it is one of the last pieces worked on by Død Avsky, the Cincinnati-based principal creator of Shadow Lake, before his untimely death at the end of July. This Volume 5 compilation is dedicated to his memory.

For the first half of the track, it does indeed sound like a requiem, with organ notes sounding a slow, classically inspired, sorrowing lament. And then the music transforms, the pulse of life driving forward and the sound becoming more modern, yet somehow without losing its connection to the grieving melody engraved in the opening minutes.

I hope you’ll make time for this release, and that if you like it you’ll toss some dollars at Black Metal Alliance, and this year’s charity of their choosing. Here’s the whole stream: