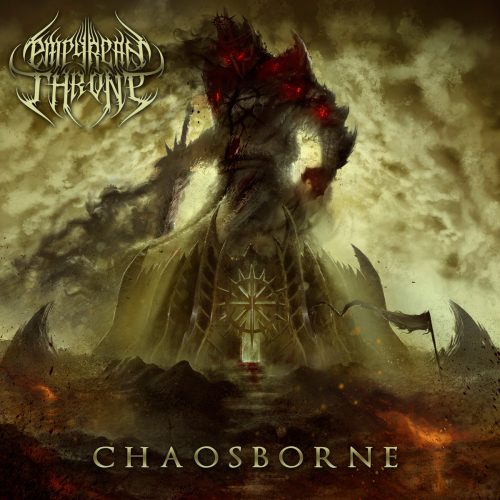 (DGR wrote this review of the new album by Southern California’s Empyrean Throne.)

There exists an alternate reality where the fusion of black metal and death metal, instead of favoring the atmospheres of the icefrost and bleak of the black metal side, took on the more mechanical and firebreathing aspects of the death metal spectrum. Where most blackened death metal tends to favor the ritual and romanticized pomp-and-circumstance theatricality loaned to it by its colder atmosphere-favoring brethren, in this alternate reality it instead leaned toward the heavier groove.

It’s not often that you see the phrase “sun-baked” attached to a disc, yet here we stand with Southern California act Empyrean Throne and their brand of symphonic bombast layered over a large feast of mechanized death metal, with the black metal aspect providing its ritual airs and snarling nihilism to the overall affair.

The group’s recently released album Chaosborne sounds like it was written from within a furnace, every song pushed to the maximum in terms of volume, and the instrumentation following suit, making grandiose sweeping movements from one carved-out blast to the next one. It envisions a world in which the entire planet is basically the high-desert, segments of sand so dry that it looks like it was created in a kiln and shaped into tiles, and those somehow still managing to crack under the heat of the sun. 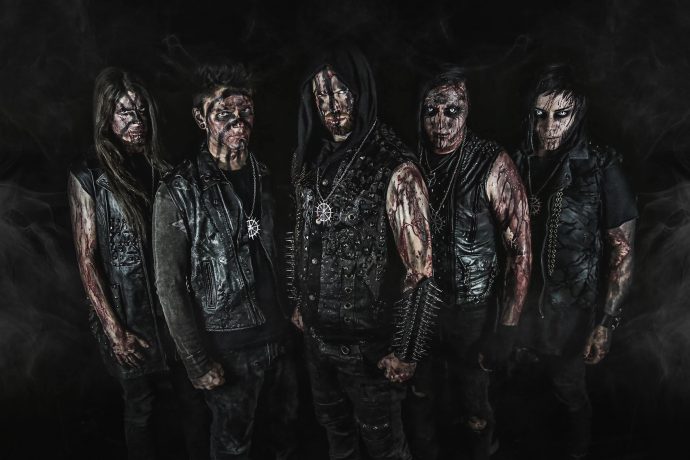 Empyrean Throne set out with the mission of recording an eleven-song apocalypse on Chaosborne, letting their debut lay out the devastation by which the band hope to forge their future career. We know that in this alternate more-death-than-black-metal fire universe I have envisioned, the band have likely succeeded, but how did they fare in the one we exist in now?

At first glance one of the immediate details to keep in mind with Empyrean Throne‘s Chaosborne is that this is a big album, effectively the group’s debut full-length — they’ve had an EP and a series of singles prior — in which the band decided that jamming over an hour’s worth of music was the right path to travel.

Nearly every song on Chaosborne stretches into the five- and six-minute range with ease; there’s only one song that is sub-four here and that one only cuts it close by a couple of seconds. That means that across Chaosborne, there is a tremendous amount of music to absorb, as the band let loose a fiery take on death metal, smothered in a hefty symphonic black influence. At times this has the band sounding like an In Sorte Diaboli-era Dimmu Borgir when they just jammed an album full of a wall of sound and left it all cranked to max, and other times going for a shrill and ultra-precise branch of death metal that could see the band worming their way within the tech-death ranks.

The group play heavily with themes of war, and imagine themselves if not the harbingers, then at least the emissaries, of the apocalypse. They do their fair share of including much-beloved recent black metal tropes, including the obligatory “Ov” replacing Of, and plenty of references to varying occult themes. At times throughout Chaosborne, it feels like Empyrean are creating a world in which the constant hellfire and endless battles of the mythos that comprise the Diablo videogames have been made real. The band make a grasp for the ritualistic nightmares that compose the void throughout many of their lyrics and pay plenty of heed to them throughout the hour-plus you’ll spend with them essentially holding your head next to a rocket engine as it ignites.

It should be mentioned that Anaal Nathrakh conspirator Mick Kenney did a lot of the production work on Chaosborne and, like his own band, Empyrean Throne are content to have everything come across as immense and loud as possible — contributing to some of the gargantuan size that Chaosborne tosses around sound-wise.

While the larger songs at first appear intimidating, the band actually show off their best side during them. When Empyrean Throne really have the chance to stretch a bit musically, they take advantage of it. Whilst they are huge fans of jamming songs full-to-bursting as well, the extra breathing room alleviates that problem a bit.

Turning their “Haereticus Stellarum” suite into a two-part piece works in its favor, because the combined twelve minutes of music flows together, but there is enough of a change between them that having the almost ceaseless assault of Part I give you a bit of a breath before the intensity ratchets up again in Part II makes it so that the back half of the disc doesn’t feel like a giant slog. If you’ve been following NCS for a while, you might even recognize Part II as a song we helped the band premiere months ago in the leadup to the full Chaosborne release. 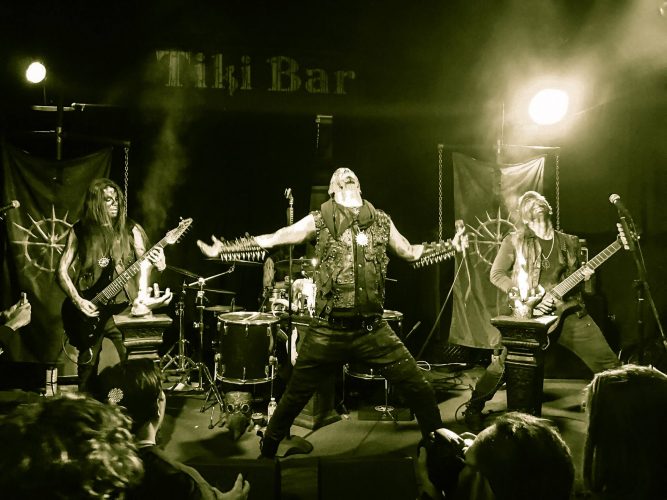 In fact, the heftier songs of Chaosborne lie in its back half, starting at “Stormrite Ascension” and packing it on from there. The titular “Chaosborne” song is over seven minutes and covers a massive amount of ground, a symphonic black/death marathon of sorts. “Chaosborne”is also a song that starts at maximum in terms of its dynamics and then dances around with it for its seven-minute run-time, from the immense high shrieks that tear through the song — and the album as a whole (vocalist Andrew Knudsen has no time for your foolish lows) — to the way the song thrashes back and forth like a captured beast throwing every tantrum it can think of in a desperate attempt to escape.

On their Bandcamp page, Empyrean Throne have a cover of the Behemoth song “Ov Fire And The Void” from that band’s 2009 album Evangelion, yet the one time where Empyrean Throne let that influence shine through on Chaosborne it doesn’t channel the ghost of Evangelion, instead hearkening back further to the percussive assault of “At The Left Hand Ov God” from 2007’s The Apostasy during their own song “Sed Nomini Tuo Da Gloriam”.

The machinelike precision with which Empyrean Throne conduct themselves throughout “Sed Nomini…” builds a strong case for the band as a drummer-fueled bulldozer. Yes, the band make plenty of sweeping motions and operatic movements throughout the song (and Chaosborne as a whole) but the constant piston-hammering of the snare throughout “Sed Nomini…” is what really drives that song. The almost compulsive headbanging that the song requires makes it an early highlight on the disc.

Like the shadowed goliath portrayed on Chaosborne‘s cover, the album is itself huge. It’s an oft-repeated phrase of mine with bands like this, whose massive symphonic epics lead to humongous albums, but it is also an experience that you have to mentally prepare for. There is a lot on offer with Chaosborne, and sometimes it works against itself by just heaping piles upon piles of music on you. Sometimes it helps to break it up into chunks and dive into songs again for the sake of exploration and discovery — because I have found that there is plenty that a whole disc run can quickly overshadow in favor of the next fiery footstep on the path toward complete annihilation.

As a whole, Chaosborne takes the idea of heavy and laughs at it, by making “heavy” its baseline and ratcheting it up from there. Though overwhelming at times, Chaosborne does a good job unleashing a volley of hellfire blasts during its hour-plus run-time, and as the group’s first full length, it shows that Empyrean Throne have a firm grip on the style of symphonic metallurgy that they seek to master. The way Chaosborne throws its flaming weight around is sure to leave a finely ground pile of ash in its wake.