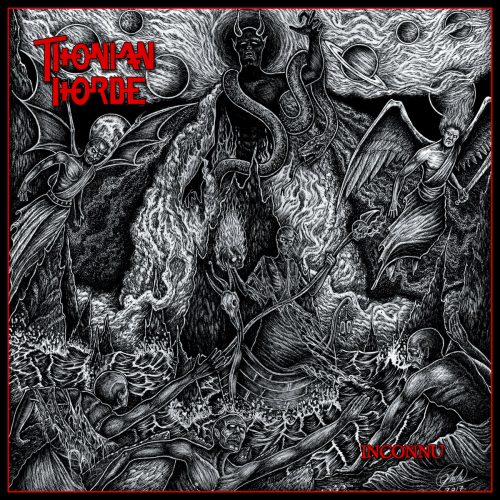 The Maryland black metal band Thonian Horde’s self-titled first album arrived last year as an independent release, and they’ve wasted no time readying a follow-on — but this time it’s coming our way via Baltimore-based Grimoire Records, with the recording and production work handled by Grimoire’s main man Noel Mueller. The new album is named Inconnu, and in advance of its September 22 release we’re bringing you the premiere of a track from it called “Five Rivers of Hades“.

For those who are just now discovering Thonian Horde, it’s a band whose members honed their chops in other groups before joining forces in this new horde, but the music of their other projects wouldn’t lead you to expect the trails they’ve chosen to blaze here. 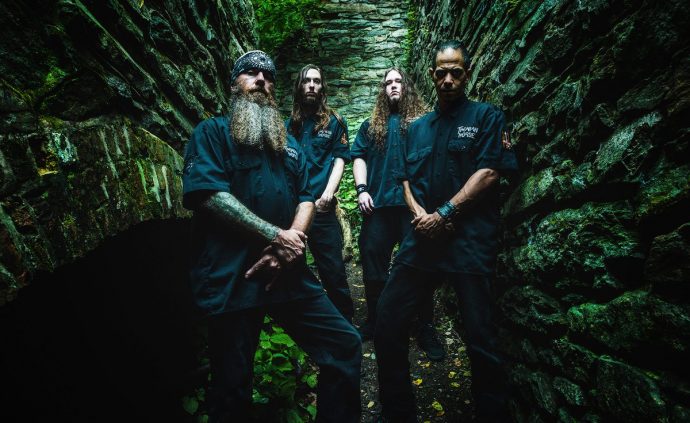 Thonian Horde’s line-up consists of people from such bands as Pale Divine, Admiral Browning, Weed is Weed, and Faith in Jane — bands whose music falls under the headings of doom and stoner metal. Yet if you were paying attention, you’ve already noticed that Thonian Horde is a black metal band… but one that hasn’t entirely lost sight of where its members came from. And that’s part of the new music’s fascination.

“Five Rivers of Hades” is a good example of how Thonian Horde have interwoven their musical interests and backgrounds to create something that transforms as it moves into ever-higher gears over the course of its five minutes (and change). It keeps a tight grip on the listener’s attention all the way through, but where it ends is very different from where it begins.

And so, to begin at the beginning, the band start by building a discomfiting sensation of mounting tension and peril. Moving in a slow rhythm with a prominent bass thrum (the bass remains a prominent feature of the music throughout), the band abrade your ears with harsh, dizzying, and dissonant guitar emissions and the kind of shrieked vocals that are face-scalding and brain-scouring. And then the tension boils over, the drummer surging into a blasting pace and the guitarists delivering a vibrating melody that’s chilling and sorrowful.

But the changes don’t stop there. Looking back, you understand that the music was building toward something more, and when the band bolt into a fast-paced rocking rhythm with a jabbing riff, capped by a scintillating fret-burner of a solo, that previous air of melancholia is replaced by a feeling of wild exultation. When the soloist returns, he and the rest of the band drive the song into an incandescent starburst of a finale. It’s such a compelling, head-moving, heart-swelling finish that you may have already forgotten where you started.

There’s a lot more of these distinctive, dynamic tracks on Inconnu, and down below you’ll find two more that debuted previously, in addition to our own premiere.