I think I need to repeat something I wrote when I first came across the title track to the new full-length by Horrified: “If Adam Burke’s artwork for the new album by the UK’s Horrified doesn’t compel you to listen to the music, there may be no hope for you (or perhaps you just need to visit your optometrist for a prescription update)”. That remains just as true today. But there is now abundant evidence besides the artwork that this album is something very special.

Entitled Allure of the Fallen, it’s set for release on September 29th via Shadow Kingdom Records, and now we have one more song to present as proof of the album’s power, in addition to streams of two others that have previously premiered. The new song is named “The Perceiver“.

For those new to Horrified, this is their third album, following Of Despair last year and 2014’s Descent Into Putridity, and the strength of the band’s continued musical evolution and their increased sophistication, self-asssurance, and distinctiveness of vision is fully revealed in this new one. In the simplest of genre terms, you could call Horrified a melodic death metal band, but their new music is far from simple. “The Perceiver“, for example, is impressively multi-faceted, rhythmically dynamic, intricately plotted, and emotionally evocative. It vividly summons sensations of torment, terror, and paralyzing grief. 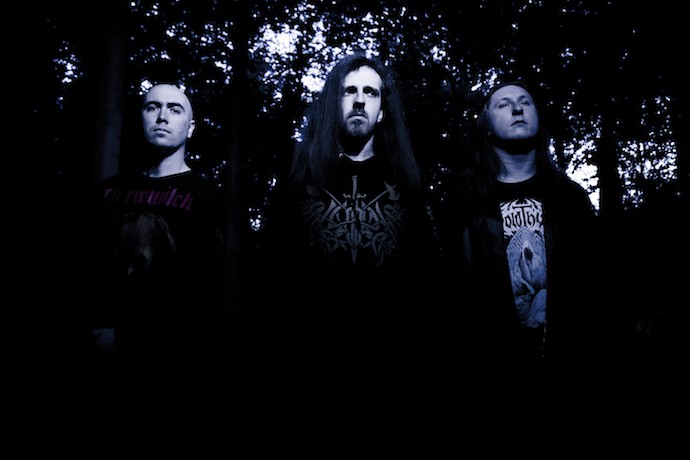 On the one hand, the song is full of surging energy, loaded with head-snapping, galloping, hammering rhythms, fusillades of blasting percussion, and torrents of harrowing riff-work. The vocals bring bestial growls and serrated, flesh-cutting proclamations. And the music also includes piercing, shimmering melodies that hit you right between the eyes. On the other hand, the music sinks into deep melancholia, and in its slower movements a funereal anguish heavily drapes the sound, along with a vibrant solo that teases vivid sensations of despair and ecstasy from the melodic through-line.

It has become cliched to describe a song as a journey, but that is exactly the right word for “The Perceiver“, and it’s a dramatic trip that proves to be intensely memorable, one in which Horrified have integrated elements of black metal and doom into their backbone of melodic death metal with great success.

Look for Allure of the Fallen via Shadow Kingdom Records on September 29. A pre-order link is below along with the track list, and then you’ll find both our premiere and two more songs from the album that are also well worth your time.

TRACK LIST:
1. Allure of the Fallen
2. Light’s Dissolution
3. The Perceiver
4. Unanswered
5. Shorn
6. The Promise of Solace

3 Responses to “AN NCS PREMIERE: HORRIFIED — “THE PERCEIVER””